By declaring that the Presidential election will be on 7 Dec the President usurped the powers of the EC -S.R.H. Hoole 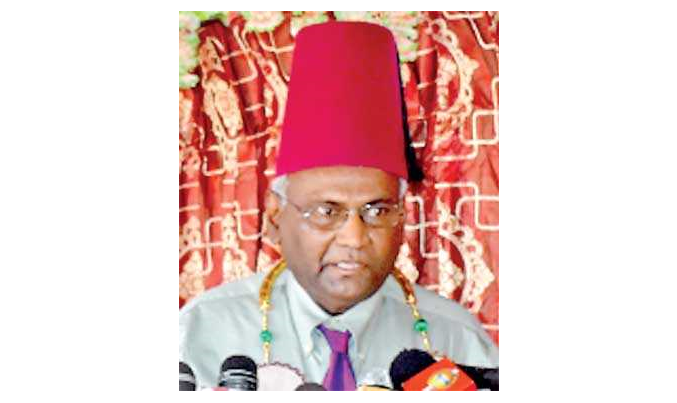 GA and District Secretary Vedanayahan, Prabhus assembled here, including women, friends: When I accepted appointment as a Member of the Commission, it was on a happy day. We had come out of a hellish, brutish period when many men and women had been disappeared and our freedoms diminished. They knuckled us on the head. We did not bend down. We stood up. We won our freedoms back in 2015.

Today should be a happy day, as we begin building this monument to democracy and the freedoms that come with it. However, I do not feel so happy. Why? Because our democracy is in ill-health and we have little to celebrate. We failed to stand up after winning our freedoms. Our choices are made for us by others. Democracy is in trouble.

I have always declined to light a lamp for Muruha’s cockerel but today I am thankful for a lamp without it, that I could light without violating my faith. However, the foundation stones are before a god and coconuts, all pointed in red and yellow. We protest that this is claimed as a Buddhist country, ignoring the rest. How are we different from the Sinhalese in forcing our religion on others without giving choice? As minorities, we must be better than the Sinhalese and show them the way to be democratic. (Without digressing, I note that the pressure to go with the majority is so great, that at the Anglican Christ Church Dehiwela, the priest – who in our theology is marked indelibly as Christ’s own forever – prayed last week to the Buddha to come and save us, and sang Hare Krishna songs, ignoring all thoughtful opposition).

Most recently, after the bombings of Easter Sunday, Muslims were targeted, and continue to be so. Recently the police said Tigers are Tamils and therefore Tamils are Tigers. All Tamils were targeted. Today they say the bombers were Muslims, so Muslims are bombers, and therefore Muslims are targeted and searched and interrogated, more just because they are Muslims. It is to express solidarity with such oppressed Muslims that I am wearing my Sufi hat, presented to me when I visited my daughter in Turkey. Search me too, I say to our brutal guardians, since I am dressed as a Muslim.

Supposedly to find bombs carried under clothes, the Ministry of Public Administration has introduced a uniform where men may wear Western or Eastern clothes, but women only the sari, so that men may give release to their voyeuristic instincts. The Election Commission, at our meeting on 4 June, decided to reject the male voyeur-dictated dress code, and told our officers that they may dress as they always did, and decided to ask the authors of the code to lay off. Even the Prime Minister and HRC have decried the code, the latter calling it sexist. They knuckled us on the head, we protested. The code will not be implemented, we are assured, but I harbour suspicions as to why it is still listed among valid circulars on government websites.

Next it will be you

Democracy is about our freedom to make choices – what language we will speak, what religion we will practice, whom we will elect as our leaders, whom we may have as guests in our homes, etc. These choices are being lost. Muslims seem to have lost their choice of attire. Next it will be you and I that will lose that choice. These losses occur when people try to expand – aggrandise – power by taking over authority assigned to others. Our sartorial choices in dressing were attempted to be usurped by the Secretary for Public Administration when he told us how to dress. That came a-cropper when we refused to knuckle under his knocks to our heads.

Then our language. Tamil is the language of administration and of the courts in the North-East, according to our Constitution. All of us in public service, including MPs, had to take oath to uphold the Constitution, and there was a time when Tamil MPs were hiding in India to avoid this. Now look what is happening. The Police in the North speak no Tamil. Recently when I went to meet Headquarters Inspector Prasad Fernando, he leathered off in Sinhalese to me, when I know no Sinhalese. The public cannot take grievances to him, because he cannot understand us. He and his likes are sent to Jaffna in violation of the Constitution to show us who is boss and to lord it over us. How can the Police uphold simple laws when they are breaking our highest law, our Constitution?

Then our judges! If you are charged with anything, the police will come and speak to the judge in Sinhalese. Poor clueless us! We need to hire a lawyer when we go to court even for simple matters. Judges are co-opted into breaking the Constitution and robbing us of our right, and lawyers make hay while the sun shines. They represent clients who most often need no lawyer, and need only to plead guilty (but cannot for not knowing Sinhalese), pay the fine and go away. By not revolting, we will continue to lose our democratic choices. We need to stand up as we are knocked on our heads even by judges who need to uphold the law.

Likewise, we have the power to elect provincial representatives and a Chief Minister. We are denied that power, and like counterfeit currency, we have Governors usurping the powers of our right to provincial representation, and lording it over us with that counterfeit power, rightly belonging to Provincial Government. Suren Raghavan, the counterfeit Governor of the North, even sits in the Chief Minister’s chair (when he has his own office), and plays lord, working closely with the Jaffna HQI Prasad Fernando to prevent us from hosting refugees we chose as our guests in our homes. Democracy is gasping.

Gnanasara Thero was let loose on us by the President, and is able to decide who shall be Ministers. Rathana Thero, an unelected Member of Parliament, goes on a hunger strike, and in fear that he might pop the Government seems to have persuaded Ministers and Governors to resign.

We should recall how the IRA’s Bobby Sands went on hunger strike, and Margaret Thatcher let him starve to death. By not happily letting Rathana Thero commit suicide, we have empowered him to override the genuine electorally established administration. We are ruled instead by them, not by our representatives. After all, which is more important – the life of one taking his own life by his free will, or our system of constitutional governance? Democracy has a bad case of life-threatening asthma. Our Parliament is being vetoed by monks.

Robbery of our franchise

The progressive robbery of our franchise does not end there. The Presidential Elections Act prescribes how the date of elections is set. The date is to be set by the Election Commission. Recently, all three Commission Members (yes, unlike Sunday Times portrayals, all three are members and one a chairman), met the President (not just the Chairman as in ST) about the long-overdue Provincial Elections and the soon-due Presidential Elections. The said Act prescribes certain rules for setting dates. We told the President that the dates will be any time in the period 15 November to 7 December. It is now tradition that if a sitting President does not contest or loses, he or she vacates office as soon as another is elected. Almost the day after our meeting, the President went to India and announced that the elections will be on 7 December. Whether to be President for as long as possible or for some such reason, the President usurped the powers of the Commission.

He knocked us on the head with his knuckles. The Commission will not bend down out of respect because if we did so, a future President may choose to decide all kinds of things for us. When we meet to set the date, I will vote for any date other than 7 December, perhaps even for November 15.

Is our democracy in its last gasp? Not as long as we can take these knocks without bending down. Is the foundation stone we laid a gravestone for democracy? No, we must in Tamil tradition ensure it is a hero-stone on which we swear to fight with our all for democracy, and our God-given rights as free men and women.

(This is a summary text of the speech by Prof. S. Ratnajeevan H. Hoole, Member of the  Commission at the laying of the foundation stone  for Jaffna election commission office on 5 June 2010. – Daily FT)