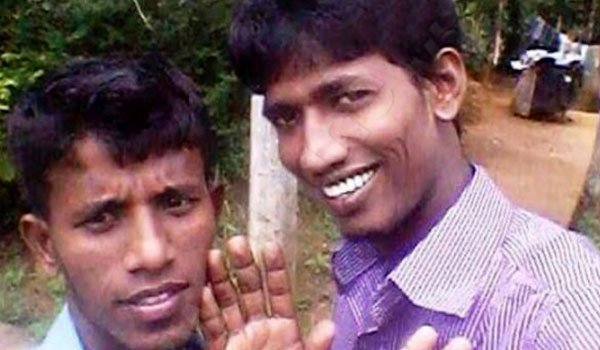 ( Two students who have been killed; Image Sri Lanka Mirror)

Post-mortem report has not yest being released although unconfirmed media reports indicate that bullets have been found the in the bodies of the two students.

Two students had died in Kokuvil, Jaffna this morning.

Meanwhile Pesident Maithripala Sirisena had called for an immediate probe into the deaths of the two University students. says Sri Lanka Mirror. He has also ordered to interdict all police officers on duty at the Kulappiddy Junction in Kokuvil when the incident had taken place.

several media reports says that  a tense situation prevails  in Jaffna after bullets were discovered in the bodies of the two students.

Earlier, it was reported that the students had died in a road accident at the Kulappiddy Junction in Kokuvil. However, bullets were found in their bodies when the the post-mortems were carried out says Sri Lanka Mirror report.

Upon learning of this, a large group of undergraduates of the Jaffna University had taken to the streets and according to sources, they are joined by former MP Mavai Senathirajah.

The two students were third years of the Arts Faculty. One student was dropping off his friend at the hostel after a party at his home in Chunnakam.

Both students were rushed to the Jaffna Teaching Hospital but had succumbed to their injuries later.