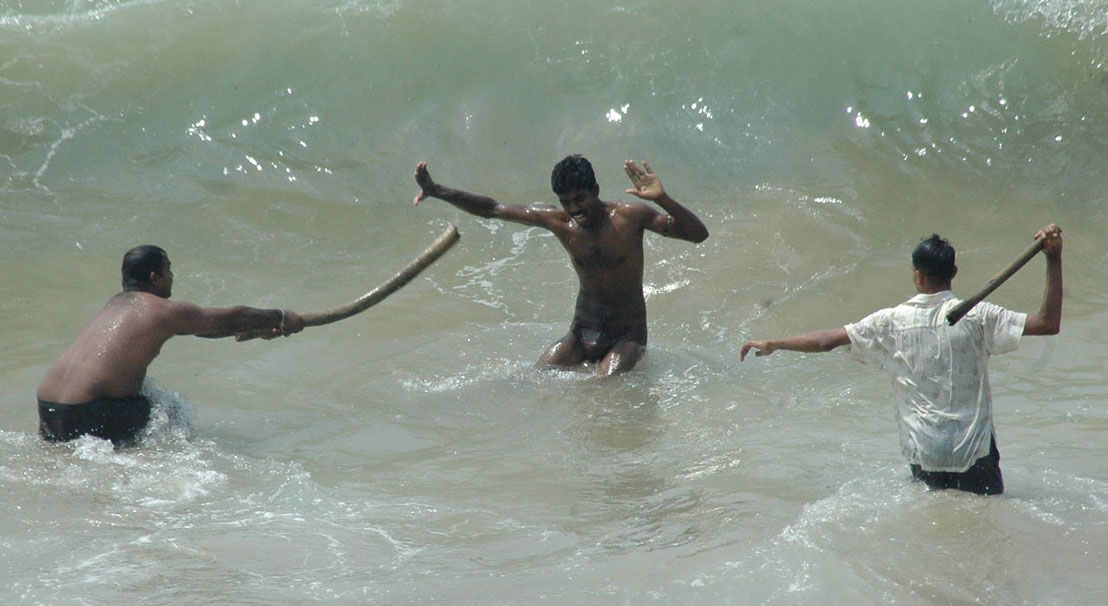 Image: Police brutality is widespread and uncontrollable in Sri Lanka ( Image shows how policemen assaulted a  Tamil youth killing him in sea some years back)

Can a nation that calls its island territory a ‘Dhamma Dveepa’ dare tolerate indiscipline and cruelty by the guardians of society? In recent decades such indiscipline and cruelty was rampant, thanks to political dispensations that manipulated both laws and security agencies to force through their diktat and secure regime survival. Today, that is changing, although the disease seems endemic.

The Human Rights Commission’s swift response to the latest death of a person in State custody – a teenager at that – clearly demonstrates that the newly empowered Commission, sensitive to our civilizational norms, is pro-active in its own role in this endeavour to recover humane governance.

The HRCSL, once reduced to almost a ‘rubber-stamp’ agency during the previous era of autocratic government, is now calling for a supplementary judicial mechanism dedicated to deal with the continued problem of deaths in custody. This is in addition to action already being taken by the higher authorities in the Police and, the Law & Order Ministry in response to last week’s tragedy in the heart of Colombo.

Last week, the news media highlighted the case of a 17-year-old boy – a minor – found dead inside the Pettah Police Station in Central Colombo. The boy, reportedly from Haputale, was seemingly ‘found hanged in his cell’ by police personnel on Thursday. He had been taken into custody on Wednesday on a charge of possession of cannabis.

Our readers are, sadly, not unfamiliar with the phrase ‘died in police custody’ and the often related phrase ‘found hanging in his cell’ or similar news reportage. Our news media has been reporting such incidents for decades. Studies and investigations by civic rights groups in the country that have focussed on such incidents since the 1970s, reveal that far more such deaths occur than the number actually reported in the news media or, even formally complained about by aggrieved kin of victims.

Certainly, the frequency of such reports has worsened whenever regimes became more autocratic and deployed security agencies to impose political repression. And, since autocracy has, inevitably, been accompanied by corruption, public institutions, including the police, have been lethally infected by such corruption.

If such corruption meant that our police cadre became compromised with bribery, the secrecy and clandestine culture of such corruption and autocracy also resulted in the police becoming lax in its own law and order duties. The secrecy of counter-insurgency action also contributed. Justice no longer needed to be seen to be done.

Dis-empowerment of the guardians has been compounded by under-resourcing of their institutions. As the Asian Human Rights Commission (AHRC) has repeatedly pointed out, the failure to support and expand the professional and institutional forensic capacities of the Sri Lanka Police has also added to the recourse to brutality by law and order personnel.

Cowed by political intimidation, demoralized by bribery by social elites and mafia, their institutions impoverished and disrespected, police personnel often take easy recourse to confessions rather than pursue investigations with little or no equipment or facilities. The pervasive authoritarian culture in recent decades encouraged forced ‘confessions’, especially, when tough counter-insurgency laws condoned secret detentions and encouraged reliance on confessions.

The judiciary also suffered from the same autocratic and corrupt pressures and influences, and sometimes, went along with such unacknowledged practices. ‘Bending’ the law became the norm and not the exception.

After a build-up by previous governments and yet sustained by corrupted institutional elements, such webs of secrecy and cruelty cannot be easily cleared. The government, especially, the Law & Order Ministry, has realized the enormity of the challenge even as it has begun taking steps to respond.

Almost immediately after reports of the death of the 17-year-old boy, the IGP and higher authorities acted swiftly to initiate a rigorous investigation. The Officer-in-Charge of the Pettah Police has been transferred and concerned station personnel are on notice. A Deputy Inspector General of Police has been asked to oversee the probe.

But, given the prevalence of such deaths in custody and the failure in earlier times to adequately address this problem by action within the Police system, an internal probe is clearly not enough. The lack of prosecutions in the vast majority of such cases over the decades and, light sentences or even acquittals in many cases heard, are highly likely to have contributed to the continued occurrence of such tragedies.
Editorial

In the current era of a new sensitivity to human rights and social justice, the rationale, therefore, must be to provide for new procedures and mechanisms of inquiry and prosecution that cannot be stymied or constrained by the Police’s own inadequacies. It is unrealistic to rely on redress solely by the very institution whose personnel are the suspect perpetrators. Indeed, in terms of the State’s overall accountability, it would not be efficient or reasonable to continue with the same old procedures.

It is with this need in mind that the Human Rights Commission has called for a specially dedicated judicial mechanism to address deaths in custody. In this, the Commission is fully living up to its responsibilities and mandate. The Government, which has done much to empower the HRCSL, should give its recommendation serious thought and, quickly.