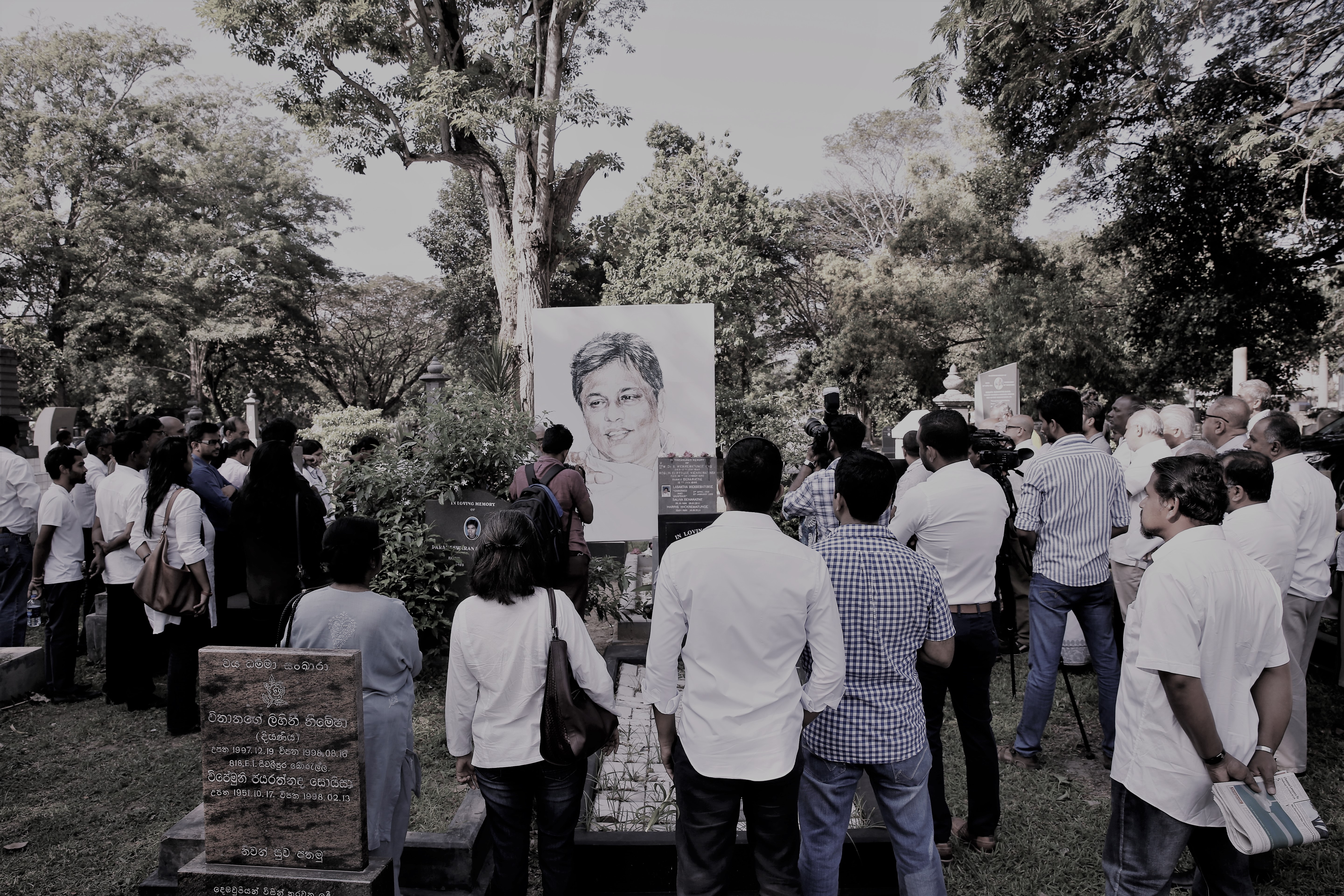 Image : There was  no presence of any senior member of the SLFP at Lasantha Wickremathunga’s 8th death aniversay which reveals indifference at best on their part. They had no affection for Lasantha as they had been at the receiving end of his critical journalism. (c) s.deshapriya.

The reality that Sri Lanka is a country in transition was brought to the fore once again when the Consultation Task Force on Reconciliation Mechanisms presented its final report to the government. Task Force members expected their report to be presented to President Maithripala Sirisena in view of its importance. They delayed issuing their report for several weeks on account of the difficulty of obtaining a time when the President could be present. With the date fixed the presentation ceremony was held at the Presidential Secretariat. But unfortunately, the President failed to turn up at the last minute. The organizers informed those gathered on the occasion, that he had fallen sick. Former President Chandrika Kumaratunga accepted the report on behalf of the government. Making a brief intervention she said that the present moment was an opportune one in which a solution to the protracted ethnic conflict could be found.

The Task Force report is one that is victim-centered and, therefore, would go far to meet the concerns of those who were affected by the war in terms of loss of life of loved ones, of possessions and directly or indirectly experienced the horror of war crimes. The report would also go a considerable part of the distance to meet the expectations of the international community and those who believe in international standards when it comes to matters of human rights. The report meets the requirements of the UN Human Rights Council recommendation of October 2015 which the Sri Lankan government co-sponsored. It recommends a hybrid process of justice in which a part of the judges, prosecutors and investigators will be foreign, though a majority of them will be Sri Lanka. However, the country still being in a process of transition, recommendations such as this one will be controversial.

While a majority of Tamils are likely to be supportive of a hybrid accountability process with the involvement of foreign legal personnel, it is unlikely that this sentiment will be reciprocated on the Sinhalese side. Many if not most Sinhalese consider the ethnic problem to be at an end with the destruction of the LTTE, and they are also aware of the double standards of the international community with regard to other militarily created humanitarian disasters in countries such as Syria, Iraq and Afghanistan. The response of government ministers to the report of the Task Force has so far been lukewarm if not negative. Prime Minister Ranil Wickremesighe who appointed the Task Force was absent at the presentation of its report. Ministers who purport to speak on behalf of the President have said that he will not permit foreign judges to sit in judgment on Sri Lankans which repeats what the President himself has publicly declared on many occasions.

The reality of a country that continues to be in a process of transition was evident again at the memorial service for slain journalist Lasantha Wickrematunga, who was assassinated on a major public road in January 2009 even as the war was reaching its peak. Lasantha had emerged as one of the most articulate and fearless opponents of the former government. He was critical of the manner in which the war was being conducted in which the kill rate was given prominence and even gloated over. He was also bold in exposing corruption in military procurements. The conduct of the war was not his only focus. He also exposed the nepotism that prevailed those days and the financial corruption and impunity that accompanied the practices of misgovernance. There would have been many in the former government who had no positive sentiments towards him.

The memorial service for Lasantha was attended by many of his family, friends, colleagues and politicians. Among the politicians were senior government ministers. Most of them were from the UNP or allied minority parties. Lasantha worked closely with the UNP members who were then in the opposition both to obtain information as well as to hasten a change of government. But there was a very glaring absence at the memorial service. This was the nil presence of any senior member of the SLFP which reveals indifference at best on their part. They had no affection for Lasantha as they had been at the receiving end of his critical journalism. But this cleavage between the UNP and SLFP even in honouring a journalist who died while engaging in his profession indicates the difficulty in obtaining a unified position on criminal justice in a time of transition.

One of the speakers at the memorial service was the lawyer who took on the responsibility of protecting Lasantha’s interests in the investigations that followed. He described how the effort to obtain justice and to catch the murderers was blocked during the period of the previous government. With the change of government in January 2015, the legal system has moved forward. There was success at the outset when the police began to act on the information they had collected during the previous six years. They could not utilize that information during the period of the previous government as the government leadership at that time did not wish to have any investigations into past crimes. However, speaking at the memorial service the lawyer complained to the mourners that the window of opportunity to find what had happened in the past was closing and the forward movement had slowed down.

There is today a great amount of public disaffection with the government. There was a high expectation of good governance at the outset. During the election campaign period, those who now form the government made many promises. There was anticipation that those who had been corrupt, who had harmed others with impunity and who flouted the law would be exposed, made to feel ashamed and be punished. At the beginning there was a flurry of investigations and even arrests of those suspected of corruption and impunity. However, in most of the cases that have been taken up for legal action, the crimes that suspected wrongdoers are actually charged with turns out to be less serious. As a result they are bailed out and thereafter act as if nothing has happened.

In cases of vast corruption and the large scale killing of people there is invariably the hand of the state. The involvement of the state, even at a lesser level, means that the entire state apparatus will be cautious in dealing with those cases. They may be concerned that they might be the next victims. This is why there is a need for political unity in facing the ugly and sordid past. The absence of SLFP members at the memorial service shows that there is a divide between the two coalition allies which does not bode well for future cooperation. The postponement of the parliamentary debate on the draft constitution coupled with the SLFP’s decision to insist on a continuation of President Sirisena at the anticipated 2020 presidential election brings in a new dimension that needs to be further studied. There is an urgent need to discuss again the elements of constitutional reform that address the ethnic conflict.

There is a danger also that the government may not find itself in a position to implement the promises it made in the co-sponsored UNHRC resolution of October 2015. Failure to implement these promises can pave the way for the breakdown of trust between the government and the Tamil polity and also the international community. Any failure to grapple seriously and sincerely with the recommendations of the Reconciliation Task Force would be a betrayal of the hopes and aspirations of those who were victims of the war, wherever they may be. As the state is central to the delivery of justice it is essential that the UNP and SLFP should work together in a more cohesive manner that present. The leaders of the UNP and SLFP, and in particular President Sirisena and Prime Minister Wickremesinghe need to stabilize their relationship and reach an understanding that extends beyond the next scheduled round of national elections in 2020. It is clear that one party by itself cannot ensure state reform that will be implemented.