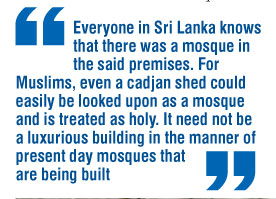 By H.M. Muhuthar, President, Matale District Masjids’ Federation
I refer to the article ‘Dambulla – Untold Facts’ published on 28.05.2012. The article refers to this so called mosque as not having any features of a mosque and states that there was no mosque in the location to begin with. This news is misleading.
I doubt whether the Joint Committee of the Buddhist Organisations had studied the bona fides of the real situation without being misled by the priest in charge of the Ranagiri Vihara who was a young priest when Rev. Ananda Nayake was living. Rev. Ananda Nayake was a close friend of my late father and on route to Kekirawa, Maradankalawala and Dambulla, my late father never failed to visit him. As my father never missed his prayers five times a day, we would attend this mosque for prayers. This was since the 1960s.

The article clearly states that the lands were blocked out and sold and the Muslims have owned it since 1950. It is also evident that unlike those of other religions Muslims do pray five times a day and it is compulsory on Fridays. If not for the mosque, where would the Muslims in the area have prayed? I have attended various functions with the Mosque Committee with our priests in which Hon. Janaka Tennekoon participated. I can remember having met his late father Hon. T.B. Tennekoon who encouraged the building of the mosque. Therefore the Minister cannot hide the fact that he has known to be true from his young days.

Everyone in Sri Lanka knows that there was a mosque in the said premises. For Muslims, even a cadjan shed could easily be looked upon as a mosque and is treated as holy. It need not be a luxurious building in the manner of present day mosques that are being built.

I appeal to the Joint Committee of Buddhist Organizations to rectify the wrong statement that was published. I live in Ukuwela and the Wehigala Viharaya is opposite the mosque. We live very cordially and partake in all activities along side the Nayake priest Sarananda. When he wanted to get electricity to the vihara, it was taken through the mosque. We even cooperated in the building of a bridge to cross the river.

The Muslims in Matale live peacefully together and the tragedy is that an extremist group is creating a very serious division amongst us and trying to agitate the Muslims. We all must unite without bringing disharmony among communities as Sinhalese, Tamils, Muslims and live without differences of caste, community, and religion. We all must unite to build Sri Lanka and make our country prosperous as our motherland. We must do this together.