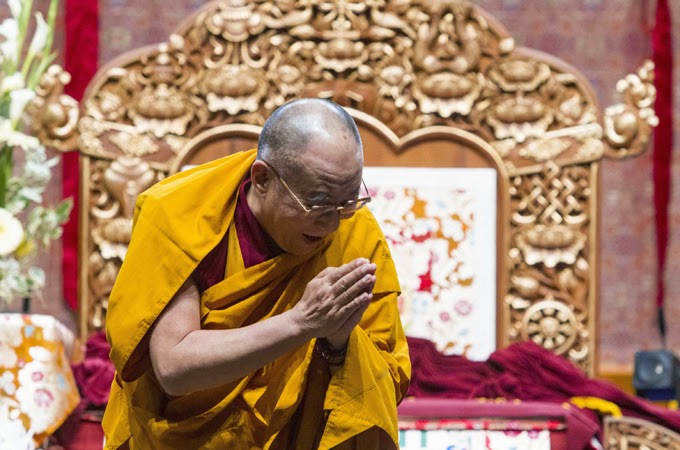 Tibetan spiritual leader says religious attacks in Buddhist-majority Myanmar and Sri Lanka unacceptable.  The Dalai Lama, the spiritual leader of the Tibetan people, has reiterated his plea to Buddhists in Myanmar and Sri Lanka to halt violence against Muslims, in a speech to tens of thousands of devotees to mark his 79th birthday. In front of the massive crowd that included Hollywood film star Richard Gere in Leh, India-administered Kashmir, the Dalai Lama said the violence in both Buddhist-majority countries targeting religious minority Muslims was unacceptable.
“I urge the Buddhists in these countries to imagine an image of Buddha before they commit such a crime,” Tibet’s exiled spiritual leader said on the outskirts of Leh, high in the Himalayas.

Buddha preaches love and compassion. If the Buddha is there, he will protect the Muslims whom the Buddhists are attacking – Dalai Lama

“Buddha preaches love and compassion. If the Buddha is there, he will protect the Muslims whom the Buddhists are attacking,” the leader, who fled Tibet for India in 1959 after a failed uprising against Chinese rule, said.
The Dalai Lama also expressed shock at a wave of deadly violence by Sunni rebels against fellow Muslims, although he did not refer specifically to Iraq.
Inter-communal violence in Myanmar has overshadowed widely-praised political reforms since erupting in 2012. It has largely targeted Muslims, who have faced social and economic boycott from the majority community.
Last month in Sri Lanka, three Muslims were killed and hundreds of shops and homes damaged in the island’s worst religious violence in recent decades.
The Dalai Lama celebrated his birthday at his residence on the outskirts of Leh in Ladakh, a mainly Buddhist region.
The Nobel Peace Prize Laureate was in Ladakh to confer Kalachakra, a Buddhist process that empowers tens of thousands of his disciples to attain enlightenment.
The Dalai Lama announced his retirement from politics two years ago, but he is still the most powerful rallying point for Tibetans, both in exile and in their homeland, and remains the universally recognised face of the movement.
The leader supports “meaningful autonomy” for Tibet within China rather than outright independence. But China accuses the Dalai Lama of covertly campaigning for Tibet’s independence, and calls him a “splittist”.