Customs: What the devil is happening? – Editorial, Daily Mirror 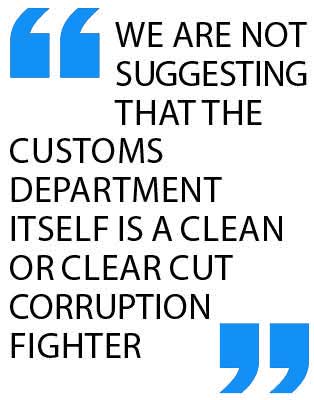 With corruption raging at its worst-ever levels and hundreds of millions of rupees in public money being plundered by state officers and private racketeers the Customs Department–instead of helping to fight corruption inside the department and by import-export racketeers appears to be adding more oil to the palm.
According to media reports the Customs Director General Jagath P. Wijeweera has issued a directive curbing the powers of Customs Officers to conduct surprise raids on alleged financial swindlers. His directive insists that Customs Officers, before making any raids on alleged swindlers must make a submission providing all details to a director and obtain what is strangely called a “Writ of Assistance”. Angry Customs Officers said by the time such submissions were made and, so-called writ obtained the alleged swindlers would probably get a tip off from someone in the department and the raid would be futile or a waste of more public money and a danger to their lives too. Our sister paper, the Sunday Times front page picture yesterday showed how Customs officers who face death threats had to get the assistance of the Police Special Task Force to check on a container allegedly containing smuggled items. 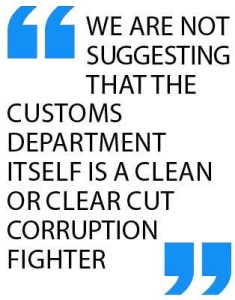 The Customs Chief says the new regulations are necessary because many complaints have been made of Customs raids on big private businessmen and others without substantial evidence. Many independent observers and analysts would justifiably ask whether this is the real reason or whether there had been high level political interference to prevent raids on big time racketeers who have big time political connections.

We are not suggesting that the Customs Department itself is a clean or clear cut corruption fighter. Recently the former Director General of Customs was transferred because he had the courage to order a raid on swindlers who apparently had VIP political connections. Even among the customs officers few could be said to be uncorrupted or incorruptible because the whole system stinks as do many state and private sector businesses.

Two years ago one of the few honest and courageous Custom officers, Assistant Superintendent Sujith Prasanna Perera, was given a top award by Transparency International for carrying out his duties faithfully though it cost him his life. According to Transparency International he was courageous enough to fight against several questionable orders by his superior officers favouring suspected parties during inquiries into Customs offences. He was one officer who was able to convince the head of the department to reverse such flawed orders and subject the accused to appropriate punishments.

There was also an incident when a Customs officer illegally altered or deleted data in the computer system to favour a group of businessmen to cover up their fraudulent activities thereby preventing a post-audit being conducted. Sujith Perera exposed this officer who was subsequently dismissed.He exposed another Customs officer who was helping a group of smugglers to smuggle several consignments of commercial goods in the guise of cargo brought in under duty free facilities thereby denying the state of revenue. He was a key witness in the court case as well as the disciplinary inquiry against that officer.  His in-depth investigation also exposed the involvement of another Customs officer who had willfully assisted a group of smugglers to clear several import consignments on forged Customs duty payment receipts.  Here again he was the key witness in the inquiry against the suspected officer.