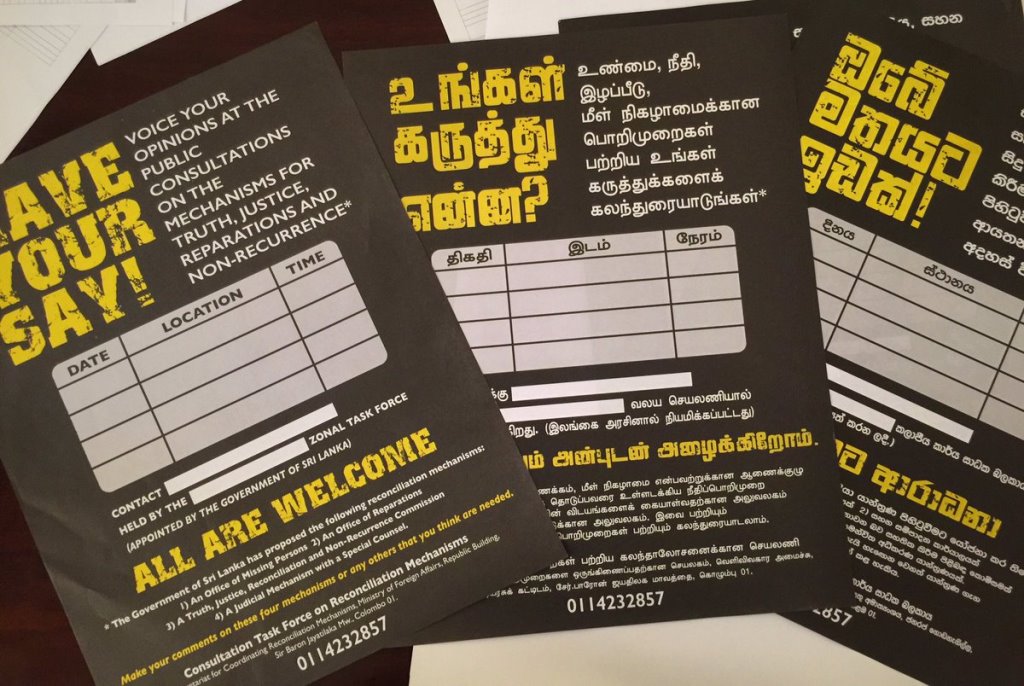 (A leaflet of  the Consultation Task Force on Reconciliation Mechanisms.)

Grave concerns have been expressed to the Consultation Task Force on Reconciliation Mechanisms about on-going human rights violations in the North and East, including allegations of abductions and incidents of intimidation of victims and human rights defenders.

CTF, headed by Manouri Muttetuwegama, says the continuation of these incidents is a matter of serious concern, having a detrimental impact on the credibility of the Transitional Justice process.

The Consultation Task Force on Reconciliation Mechanisms has been obtaining submissions from the public in the North and East and most submissions call on the government to demonstrate its commitment to the stated goals of reconciliation, truth, accountability, justice and non-recurrence.

It is strongly and repeatedly stated in the submissions that the government must repeal the Prevention of Terrorism Act (PTA) and must introduce legislation, to give effect to the International Convention for the Protection of All Persons from Enforced Disappearance, including the criminalisation of enforced disappearances, in addition to ensuring arrest and detention take place in accordance with the Presidential Directives issued in June 2016.

The CTF for its part has raised concerns about the impact of harassment and intimidation, and from the outset provided written instructions to the military and police to ensure that no such incidents relating to the consultations would take place and adversely impact these consultations. Fear continues to be a factor impacting consultations, including when family members are asked questions on options for justice at public meetings, as they believe that their missing family members are being held in custody and will be at risk if the family speaks out.

An overwhelming number of submissions received by the CTF articulate the need to punish perpetrators and to hold them accountable. They submit that this is the only way to ensure non-recurrence of these incidents. This was seen as particularly important for the State, as it is answerable to its citizens. It is also recommended that non-state actors responsible for disappearances are held accountable; for example, former LTTE leaders who are still alive.

Some submissions also recognise that the question of justice and accountability for disappearances is not directly addressed by the Office on Missing Persons (OMP).

The feeling is that it will merely refer cases, where it suspects an offence has been committed, to a prosecuting or law enforcement authority. Given the absence of legislation giving effect to Sri Lanka’s obligation under the International Convention on Disappearances, the lack of information about the mandate of the Special Court and the lack of trust in the Police and Attorney-General, it is seen as imperative that adequate administrative arrangements and checks are instituted to ensure independence from those actors and agencies who are implicated in enforced disappearances (e.g. TID and CID) and to foster confidence in the eyes of the families of the missing and disappeared. The nature of such administrative arrangements should be clarified before the OMP Bill is passed into law.

The CTF notes that the four Presidential Commissions of Inquiry into the Involuntary Removal or Disappearance of Persons, which were appointed in the 1990s, recommended the following: persons responsible for disappearances must be prosecuted no matter who the perpetrators are; prosecutions should not be limited to junior officers; special courts to hear disappearance cases and an Office of an Independent Human Rights Prosecutor; the recognition of the right of an aggrieved person to file a private plaint; and the establishment of a Legal Advisory Service Bureau to provide legal assistance to members of families of disappeared.

While punishment and accountability were the primary drivers of justice seeking in the submissions, some point to the need for restorative justice, where perpetrators are (including army and security officers deemed responsible) are rehabilitated. It is noted in the submissions that victims and perpetrators of disappearances live side by side, that the immensity of suffering related to disappearances must be recognised and that relationships between different communities must be rebuilt. Hence, the government must also explore restorative justice process and mechanisms .

Several submissions to the CTF refer to the importance of memory initiatives and the ways in which memory relates to transitional justice processes and practices. While memorialisation falls within the realm of reparations, it is a concept that cuts across three pillars of transitional justice i.e. the right to know, the right to justice and the guarantee of non-recurrence. It is noted that, “a sensible, sensitive, nuanced approach to memorialisation can act as a tool for reconciliation and healing”.

However, state practice of memorialisation has been selective, and more likely to erase and deny the past, propagating a lack of understanding or acknowledgment of the abhorrent nature of the crime of disappearances and its devastating effects on families, the lack of understanding that it is a crime that transcends ethnicity and is not limited to the war or a crime that came into being during the war. Furthermore, it is recommended that state practice of memory must be conducted in a strategic, sensitive and balanced manner keeping in mind that government involvement in memory initiatives can exacerbate already existing divisions between communities.

It is suggested that the State adopt a national policy on memorialisation, establish a museum dedicated to remembering the war and its impact, including disappearances, and declare a national day to remember disappearances. Submissions also recommend that the Government amend the national educational curricular, protect and reinstate monuments to remember disappearances, lift prohibition on remembering the missing and the dead in the North and the East, recognise the human suffering caused by war to all families affected in Sri Lanka, recognise the right of victim-survivors to memorialisation initiatives, and ensure the provision of state support for and facilitation of these initiatives.
http://www.thesundayleader.lk/2016/08/14/government-urged-to-repeal-pta/