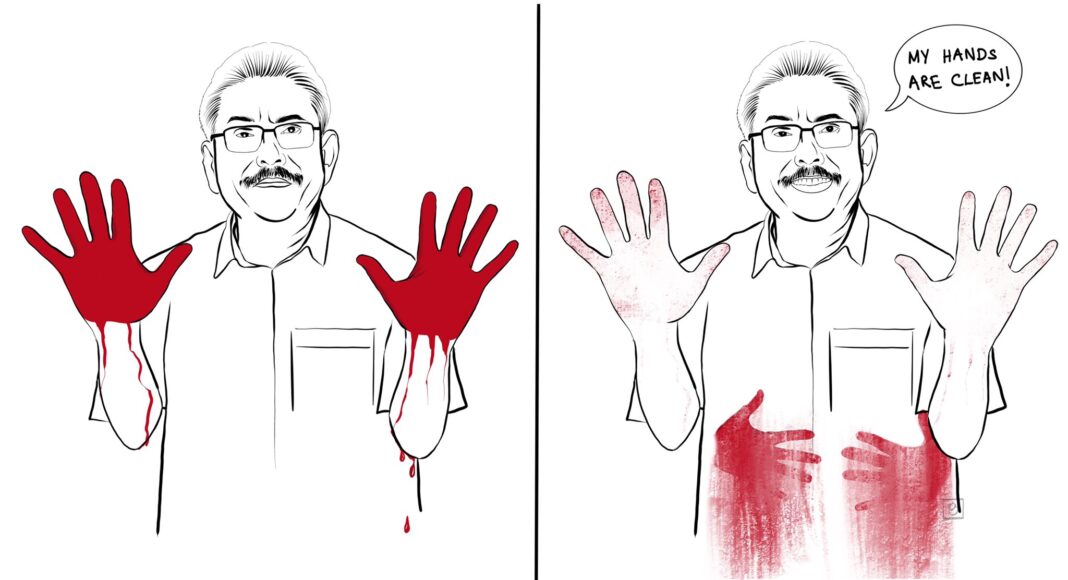 Johannesburg: Lawyers from the International Truth and Justice Project (ITJP) have submitted a criminal complaint to the Attorney General of Singapore requesting the immediate arrest of former Sri Lankan President, Nandasena Gotabaya Rajapaksa, for war crimes. The 63-page complaint argues that Rajapaksa committed grave breaches of the Geneva Conventions during the civil war in 2009 when he was secretary of defence and that these are crimes subject to domestic prosecution in Singapore under universal jurisdiction.

Mr. Rajapaksa fled to Singapore in mid-July after months of mass protests calling for his resignation.

“The economic meltdown has seen the government collapse but the crisis in Sri Lanka is really linked to structural impunity for serious international crimes going back three decades or more,” said the ITJP’s executive director, Yasmin Sooka. “This complaint recognises that it’s not just about corruption and economic mismanagement but also accountability for mass atrocity crimes.”

The ITJP submission to the Attorney General calls for the arrest, investigation and indictment of Gotabaya Rajapaksa. It begins by outlining his role as a former military commander in 1989, in charge of a district where at least 700 people disappeared under his watch. But the document focuses mainly on his role as Sri Lanka’s secretary of defence, during the end of the country’s civil war in 2009.

The legal complaint argues Gotabaya Rajapaksa committed grave breaches to the Geneva
Conventions and violations of international humanitarian law and international criminal law
during the civil war in Sri Lanka. These include murder, execution, torture and inhuman
treatment, rape and other forms of sexual violence, deprivation of liberty, severe bodily and
mental harm, and starvation.

Detailed evidence is adduced to show that Rajapaksa issued direct orders by telephone to his former military buddies whom he appointed as Major Generals to command the offensive and watched the conduct of the battle live on surveillance and drone footage in headquarters. The dossier submitted by the ITJP contains accounts of repeated and deliberate strikes by the army on civilians sheltering in earthen bunkers, killed while queuing for food or receiving first aid treatment in hellish conditions lying on the floor of makeshift clinics.

It details how the decision to expel aid workers from the war zone in September 2008 was
Gotabaya Rajapaksa’s and designed to hide the extent of human suffering from the eyes of the world. Even United Nations officesin the war zone were repeatedly hit by the Sri Lankan air force to encourage aid workers to flee and yet Gotabaya Rajapaksa himself boasted that the air force could pin point targets; he said they surveilled targets and planned and reviewed every air strike.

Gotabaya Rajapaksa’s ministry was in charge of approving humanitarian deliveries to the war zone and although he sat in meetings with humanitarian agencies who repeatedly warned that the civilian population were in desperate need of life-saving medicine and food, he denied permission to send in supplies. Tamil mothers who survived the war routinely describe being so hungry they were unable to breastfeed their babies in the war zone, while milk powder and food queues visibly made up of women and children were repeatedly attacked with heavy artillery, shortly after surveillance drones had flown overhead.

Every hospital and makeshift medical clinic for civilians was attacked in 2009 by the Sri Lankan armed forces, including the district hospital in Puthukkudiyiruppu which Gotabaya Rajapaksa claimed to Sky TV was a legitimate target because it lay outside an area the government unilaterally designated for civilians. The night the hospital, packed with the injured, was attacked by 50 shells according to a UN investigation, media reports said Gotabaya Rajapaksa, himself an ex army officer, had been in the Operations Room all night watching.

“Such linkage information makes Gotabaya Rajapaksa complicit in the wilful killing of civilians and other heinous crimes, including torture, starvation and sexual violence committed in 2009,” said Alexandra Lily Kather, one of the international lawyers who drafted the complaint to the Singporean authorities. “The concept of universal jurisdiction assumes there are certain crimes that are of concern to humanity as a whole and states have an obligation to prosecute them domestically regardless of where they were committed, against whom or by whom. This is an opportunity for Singapore to use its own laws in pursuit of justice and protect the world from a man who has a hideous history of gross violations of human rights against all the different communities of Sri Lanka. Serial perpetrators must face trial, not be issued visas.”

In 2019 the ITJP with the international law firm Hausfeld LLP assisted 11 victims of torture to file a civil case against Gotabaya Rajapaksa in California . The case was withdrawn when he was elected President in 2019 and acquired head of state immunity. That immunity no longer applies now he has resigned from office. This is believed to be the first criminal complaint against him.

By the final days of the war in May 2009, Gotabaya Rajapaksa was chairing the National Security Council Meeting and fielding requests from the US Amabssador to stop the shelling and send in food, which he did not actually comply with. As the war reached its end, military commanders at the frontline described receiving telephone calls from Gotabaya Rajapaksa asking them to hurry and end the war. It is at this point that multiple witnesses describe seeing soldiers executing in cold blood injured fighters who were unarmed and civilians trying to surrender.