Crime among Sri Lanka soldiers on rise; 18% reported crimes committed by them 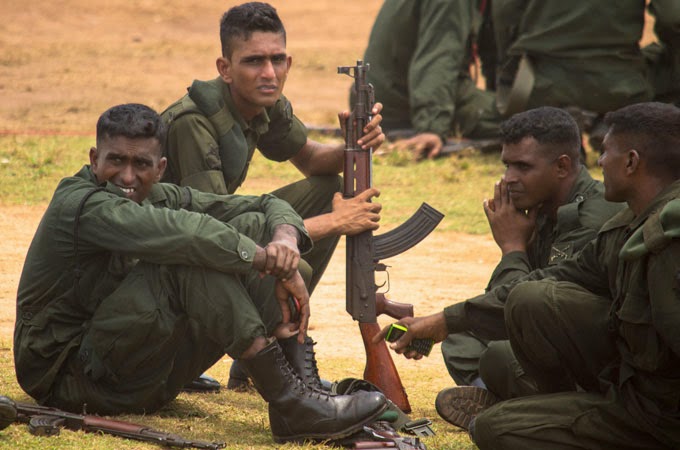 Experts say desertion and crime in armed forces has spiked five years after civil war end due to absence of counselling.Colombo, Sri Lanka – Crime and desertion in Sri Lanka’s armed forces are on the rise five years since the end of the country’s civil war because of a lack of adequate counselling, psychologists have said.
Police statistics suggest that in the first four months of 2014, nearly 18 percent of reported crimes were committed by members of the armed forces – a large increase on the 5 percent reported for the whole of 2013.

Experts are now advising against the continued wartime practise by which senior officers counsel soldiers living with the “mental scars” suffered in combat against violent or guerrilla groups.

Dr Prabath Gunatillaka, who lectures in psychology at the universities of Colombo and Canberra, believes the standard of counselling offered to Sri Lanka’s military personnel has fallen short of what should be expected for a country emerging from a 30-year war.

With the war being over and the soldiers attempting to reintegrate into civilian life they must be given access to certified psychologists. Relying on senior officers who have experienced the same traumas negates the effectiveness of counselling

“When a group of soldiers are deployed in the field they do not have the luxury of counsellors, it is then that they resort to seeking assistance from their senior officers,” said Gunatillaka.

“However, with the war being over and the soldiers attempting to reintegrate into civilian life they must be given access to certified psychologists. Relying on senior officers who have experienced the same traumas negates the effectiveness of counselling.”

SSP Ajith Rohana, a police spokesperson, has attributed many of the crimes committed by members of the armed forces to deserters.

Desertion has risen significantly since the end of the war, with military officials disclosing that nearly 30,000 soldiers – of the overall forces of 350,000 – are currently classed as deserters, and blaming this on financial hardship in their home villages.

Brigadier Ruwan Wanigasuriya, a military spokesperson, suggests that many of the deserters do not remain absent for more than a few months.

“Many of our soldiers are from the rural areas, they are often absent during the harvest period as they are helping their families,” Brig Wanigasuriya said. “More often than not they return once the harvest is complete.”

But psychologists say the lack of proper counselling available to the armed forces is inflating the desertion rate which, in turn, is heightening crime.

Dr Gunatillaka says soldiers who fight violent or guerrilla groups can be subjected to scenes not normally seen on a battlefield, triggering post-traumatic stress disorder (PTSD) that fosters irrational behaviour. He believes the high number of desertions can also be attributed to the fact that these soldiers no longer feel constrained by the rules of the armed forces.

“Soldiers have been witness to scenes on battlefields that many of us cannot imagine; they have killed people and been praised for doing so,” he said “They now believe that they are above the law, and this is reflected in their decision to desert and pursue criminal activities.”

The decision to provide counselling to armed forces personnel is currently made by senior officers.

Wanigasuriya explained that the Sri Lankan army follows a procedure used by armed forces everywhere and insisted that it is providing the necessary counselling where required.

“Our officers are trained to assist the soldiers with any issues the face, be it emotionally or physically,” he said.

The spokesperson denied suggestions that, where soldiers had committed crimes, these were the result of psychological scarring.

“None of our soldiers have suffered from PTSD – the counselling offered by the military has been very effective in ensuring there are no problems with its soldiers,” he said.

According to Wanigasuriya, around 200 soldiers are currently admitted to psychiatric wards in military hospitals.

“We have such a low number of patients because the culture in our country ensures soldiers do not suffer from PTSD. They have close support from the other soldiers, and their families,” he said.

However, Dr Gunatillaka disputes this claim, arguing that while Sri Lankan culture does encourage close-knit bonds between soldiers and their families, it also frowns upon psychological problems.

“Many soldiers who have seen combat suffer from PTSD – having a close family network would not avert the problem,” he explained. “In fact a soldier will feel it is necessary to hide such issues from his or her family in our culture, and this will only exacerbate the problem.”

Former sergeant Sarath Abeykoon, who left the army in 2012 after serving for 10 years and saw combat in the final weeks of the war, is now finding it difficult to adjust to civilian life and complains of suffering from flashbacks.

“I can be walking down the street when the smell of fumes would suddenly trigger a memory of the war,” he said. “It is very difficult to live a normal life when I am not sure what will trigger such memories.”

Dr Gunatillaka, who has been assessing the former sergeant’s condition, has diagnosed him as suffering from PTSD. “He is no danger to himself or anyone around him but his mental state is certainly fragile,” the doctor explained.

While Abeykoon has sought the help of a psychologist, many other soldiers cannot afford such care or do not feel comfortable receiving it because counselling is considered a taboo.

The former sergeant revealed that he keeps his counselling sessions secret from his family and friends.

“When I was in the military I could always go to my commanding officer (CO) and speak to him if I felt it was necessary. When the war ended I did not have anyone else to talk to – very often my own CO would not really know what to say. While the option to be sent to the military hospital was available, our officers were not keen on this.”

While Wanigasuriya points out that servicemen and women, both current and retired, have free health-care at military hospitals, this would not have helped Abeykoon.

He says he did not want to pursue treatment with the military because he felt they had not helped him properly while he was serving.