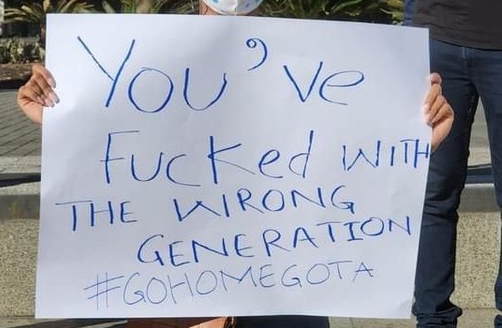 Government clamped a sudden 36-hour all-island curfew from 6pm yesterday (Saturday) till Monday 6am, a few hours after declaring a state of emergency in the country.

The immediate reason was to crack down on mass country-wide anti-Government gatherings planned for today to protest against the huge increases in the prices of food items, the non-availability of essential goods such as gas and fuel and the 10-12-hour power cuts apart from the other effects of the acute foreign exchange shortage.

The move to call out the armed forces came on the orders of President Gotabaya Rajapaksa following.

a protest march close to his private residence at Mirihana on Thursday night. It started as a peaceful march but turned violent thereafter following clashes between the protesting people and the security forces.

“The armed forces — the Army, Navy and the Air Force — can carry out search operations and arrest people as the Police do,”Law and Order Ministry Secretary Jagath Alwis the Sunday Times, explaining the effects of the Emergency Regulations promulgated on Friday night.

His comments came as Law and Order Minister, Retired Vice Admiral Sarath Weerasekara, declared that 10,000 police officers were also on standby to deal with situations threatening law and order.  The Minister told the Sunday Times that special arrangements had been made to provide protection to VIP residences, including those of ministers and government politicians.

Today’s major countrywide protests were to be held in several principal towns across the country. Retired Major General Alwis said that in view of the curfew such protests would be illegal.

The Sunday Times learns that troop reinforcements have been deployed in the city of Colombo and principal towns to deal with “violators of the law”, as the government has put it.

The move to impose a state of emergency and a 36-hour curfew has drawn angry reactions from opposition parties.

“The people are out in the streets because they are starving. They are sick of power cuts and they want essentials such as food, fuel and gas. The Government’s answer to the people raising their voices is to impose a state of emergency and curfew,” Samagi Jana Balawegaya (SJB) General Secretary Ranjith Maddumabandara said..

“While measures such as the state of emergency and curfews are there to protect the people, the Government is implementing them to protect the rulers,” he said.

Yesterday (Saturday), before the 36-hour curfew came into effect, a series of anti-government protests were held in several parts of the country, including Colombo, Anuradhapura, Motatuwa, Galle and Kandy.