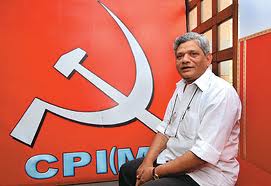 Describing as “state of uncertainty” the situation at the Centre in the aftermath of DMK’s pullout decision from UPA, CPI(M) on Tuesday said it favours full autonomy for Sri Lankan Tamils.
“Right now the situation (at the Centre) is in a state of uncertainty… they (DMK) have formally announced pulling out of UPA and the government is in minority because of this,” CPI(M) leader Sitaram Yechury told reporters here outside Parliament.

He said his party is clear about the autonomy issue.

“We are for full autonomy for (Sri) Lankan Tamils. (Sri) Lankan government was also committed to it a few years ago. Constitution was also amended for devolution of power. We want that this should be implemented which has not been done till now,” he said.

DMK pull out a pressure tactic

On DMK’s pullout decision, Mr. Yechury said, “Maybe it is a pressure tactic. DMK’s position is still not clear whether it will finally pull out of the government or support it…or reconsider its decision.”

Earlier in the day, DMK withdrew its support to the UPA and pulled out its five central ministers over the issue of alleged human rights violations of Tamils in Sri Lanka.

DMK has 18 members in the Lok Sabha and the UPA with its support has 303 MPs in the 543-member House.

The strength of the ruling alliance has reduced to 224 after the pullout but UPA enjoyed support of 281 MPs that included those of outside supporting parties.