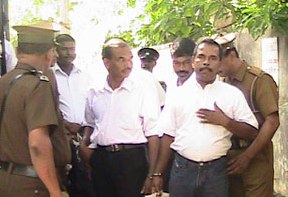 Ten former PSD officers have been ordered to pay Rs. 2 million compensation to Rukantha and Chandraleka in their harassment case along with four and half year prison sentences.
The former PSD officers of Chandrika Bandaranaike stood accused of breaking into the home of the popular singing duo Rukantha Gunathilaka and Chandraleka Perera in Mattegoda and harassing them.

Each of the suspects were also ordered to pay Rs.100,000 each to both Rukantha and Chandraleka which amounted to a total of Rs.2 million in compensation.

They will serve an addition one year of simple imprisonment if the amounts cannot be paid.

The seventh defendant in the case was released without charges by the court.
AD