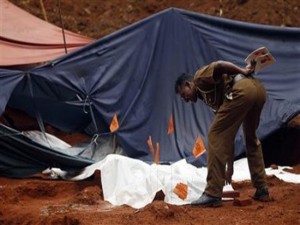 The lawyer appearing on behalf of the petitioners, Sunil Watagala, said that the Magistrate had also ordered a DNA test on the skeletal remains found in Matale.

Over 150 skeletal remains and human bones have been unearthed from the mass grave in Matale. Forensics had determined that the remains were of those killed sometime in the late 1980′s and the area has now been marked as a crime scene.

At least 10 skeletal remains were first found from the site near the Matale hospital in November last year by construction workers when land near the hospital was being dug-up to construct a new building. Following police investigations excavation work began to look for skeletal remains at the site and more remains were found.
The JVP had demanded that the government carry out investigations on the mass grave following fears the remains maybe that of JVP members or supporters killed during a 1987-89 insurgency.

In a written statement submitted to the UN Human Rights Council, ahead of the 22nd session last March, the Asian Legal Resource Centre (ALRC), a nongovernmental organization, had said that the UN Working Group on Enforced Disappearances should, through their experts, study the situation and the conduct of inquiries relating to the remains of the 200 or more persons found in Matale and assist the Sri Lankan government to ensure that these inquiries meet international standards. (Colombo Gazette)