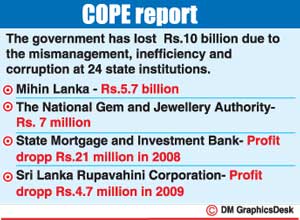 Kalum bandara
The parliamentary Committee on Public Enterprises (COPE) has revealed that the government has lost a staggering Rs.10 billion due to the mismanagement, inefficiency and corruption at 24 state institutions from 2010 up to now, the Daily Mirror learns. This is in addition to the annual losses incurred by some of these institutions.

COPE has identified the budget airline ‘Mihin Lanka’ as an institution running at a significant loss right from its inception.

The company has incurred a loss of Rs.3.3 billion in 2007/2008 and this has risen to Rs.4.6 billion the following year with the accumulated losses now amounting to Rs.5.7 billion.

Apart from the massive losses it has incurred so far, Mihin Lanka now faces a liability of Rs.2.4 billion. COPE observes that figures provided by the company with regard to its financial position were incompatible with the findings of the Auditor General. The company has also failed to provide sufficient evidence in this respect.

The company has failed to pay interest on the Rs.500 million loan obtained from the Airport Aviation Services (Pvt.) Ltd. And this had led to the Treasury having undertaken to settle the loan, thus adding another cost to the state coffers. The National Gem and Jewellery Authority, State Mortgage and Investment Bank, Sri Lanka Rupavahini Corporation, Sri Lanka Telecom have also been mentioned as the institutions with serious operational losses over the past years. The COPE said it was alarming to see the accumulation of losses at a rate as high as 90 per cent.

The Gem and Jewellery Authority had lost Rs.7 million due to the violation of a bond signed with the American Gem Traders Association. The revenue had decreased over the years at the institution whereas the expenditure had increased.

At the State Mortgage Bank, a large amount of loans remained outstanding. The profit level had dropped from Rs.312 million in 2005 to Rs.21 million in 2008. The University Grants Commission had paid Rs.306 million as language proficiency allowance to employees. COPE cited this as a major loss during the year under review.

COPE said at Sri Lanka Rupavahini Corporation, a post of the Chief Executive Officer has been created though there is no provision for such a post in the Rupavahini Act. The Corporation had not taken action in 2010 to recover Rs.42 million payable by various political parties for the use of its airtime during election times although COPE had given directions in this regard at meetings held previously while Rs.10 million due from Mihin Lanka too had not been recovered. Rs.2.5 million paid as advances to some employees had been written off. The net profit of the Corporation had dropped from Rs.137 million in 2006 to Rs.4.7 million in 2009.

At Sri Lanka Telecom, the underpayment of telecommunication levy for the period between 2003 to December 2009, had amounted to a staggering Rs.6 billion. The total loss for the year 2008/2009 was Rs.9.3 billion at Sri Lankan Airlines. A net loss of Rs.352 million had been reported under the Fuel Risk Management Programme.

Sri Jayewardenepura University had spent Rs.3 million on a project without getting the ownership of the land verified. The university had maintained a fund called ‘Vice Chancellors Fund’ disregarding legal provisions in this respect.