Contempt of court in Sri Lanka: A flawed law without a definition of the crime – Basil Fernando 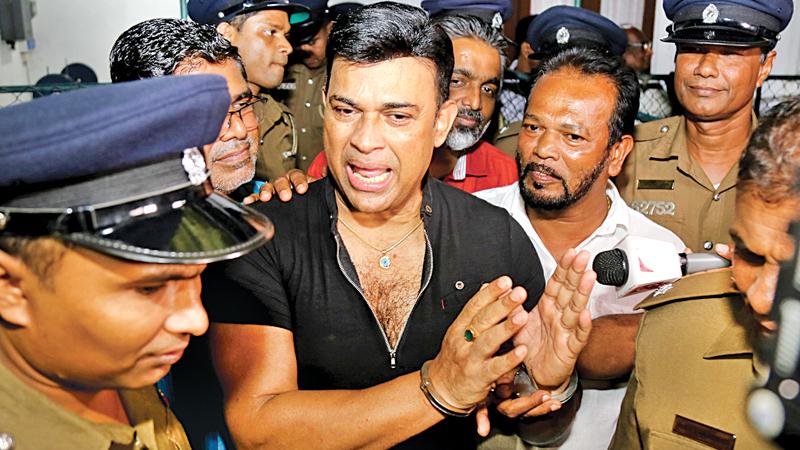 Image: Ranjan Ramanayake, a senior politician who was also charged under the contempt of court law and sentenced for 4 years.

In a letter to UN Special Rapporteur on the Independence of Judges and Lawyers, Basil Fernando, Director of the Asian Human Rights Commission’s Policy and Programmes says that  Sri Lankan court does not have the criminal jurisdiction to conduct a trial on the basis of contempt of court till a statute provides for a definition of an offence of contempt of court.

This letter is regarding two persons:

Among these cases is that of Anthony Michael Emmanuel Fernando, who was sentenced for one year of RI, allegedly for talking aloud in court, which Fernando had denied. The UNHRC recommended that Fernando be compensated for illegal detention and that Sri Lanka should enact a legislation relating to contempt of court.

The next case was that of senior politician S.B. Dissanayake who has, at a public meeting, stated that he does not fear the shameful courts, and for which he was sentenced to two years of RI. On that occasion also, the UNHRC reiterated its position in the earlier communication of Fernando and stated that prolonged detention amounts to disproportionate punishment and that disproportionate punishment amounts to illegal detention. The same recommendations as before were also made in this case.

The third case relates to Ramanayake, a senior politician who was also charged under the contempt of court law. This time, the court went on to extend the period of punishment to four years and also the suspension of civil rights for seven years which will even prevent him from contesting for elections. Once again, the same principle of disproportionate punishment amounting to illegal detention has taken place.

What makes it worse is that the Supreme Court (SC) has forbidden through its Rules to have any appeal from their decisions relating to contempt of court charges.

It is in that background that the fourth case is now pending which is likely to be taken on 9 March where the general expectation is that a similar punishment will be imposed. The lawyer concerned in this case is a prominent civil rights lawyer who also has been a practitioner on behalf of many persons, particularly in cases which involve very sensitive political issues.

He is also a constant litigant against corruption. He has strived in the Commission to Investigate into Allegations of Bribery or Corruption (CIABOC) against several SC judges, alleging acts of corruption. There has been established a pattern of punishing persons who raise serious issues particularly about the extraordinary powers of the Executive President and also anyone who is critical of the Judiciary.

The sole basis on which the SC is proceeding to hear these cases is Article 105(3) of the Constitution which gives power to the SC to hear contempt of court charges and punish at their discretion by way of imprisonment or fine. However, other than this constitutional provision, there is no law that has been established as to the manner in which the said Article 105(3) should be implemented. There is no defined offence of contempt of court in the statute books of Sri Lanka.

It is also a well-established tradition of Sri Lankan criminal justice that a criminal offence will contain the elements that are needed to be proved by the prosecution if a charge against a particular offence is to be successfully prosecuted. The Sri Lankan law also in all instances provides that in the definition of a criminal charge, the possible sentence is prescribed by the Legislature and discretion is granted to the Judiciary within the framework of the statutory limitation on the prescribed sentence.

Sri Lankan criminal law also laid down a procedure for investigations into all crimes and also the procedures for trial. In the case of contempt of court, none of these procedures are followed.

The manner in which the contempt of court law is used in Sri Lanka violates international law as well as the Constitution itself.

The matter of the abuse of contempt of court by Sri Lankan courts has been brought to the notice of the relevant authorities over and over again for many years. Many Special Rapporteurs including the very first Special Rapporteur on the Independence of Judges and Lawyers himself intervened in the case of Fernando and publicly condemned the action taken in that case. Many international organisations, including inter-parliamentary groups, have condemned the practice that is taking place in Sri Lanka.

However, there has been no change of any sort in this practice and the shocking fact is that the punishments are increased without giving any reason for such increase. The contempt of court law is being used as the instrument of punishment against some selected persons for reasons other than the protection of the legal proceedings in courts.

Therefore, we urge you to take up both of these cases as urgently as possible and intervene in order to prevent this continuous abuse of the use of illegal detention through court orders in Sri Lanka, particularly in the case of contempt of court.