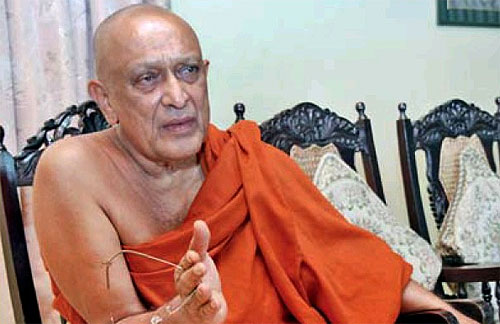 Assuming such a candidate wins the next Presidential election, s/he will immediately dissolve Parliament. The first Bill before the new Parliament will be the new constitutional amendment. There should be no difficulty in obtaining the necessary 2/3 majority as it would be a Government Bill. The Opposition, having been defeated at the elections, is highly unlikely to wait another 6 years to try to gain power. With a Parliamentary form of Government in place, the Opposition would have a greater chance of coming back to power.

As accepted by a Full Bench of the Supreme Court in the matter of the 13th Amendment Bill, read with the determination of the Sarath Silva Court on the 19th Amendment Bill, any amendment of Article 4 that does not offend Article 3 would not require approval at a Referendum. However, if the Supreme Court holds that the new Amendment requires approval by the People, a Referendum would be held.

The President shall be elected by Parliament and shall act on the advice of the Prime Minister (PM), unless when there is express constitutional provision to the contrary.

No, person shall be eligible for election as President or a Vice President unless such person is a citizen of Sri Lanka, has completed the age of 35 years and is qualified for election as a Member of Parliament (MP).

The President shall appoint as PM, the MP who, in his opinion, commands the support of the majority of MPs in Parliament. The PM shall be deemed to have resigned if Parliament passes a motion of no-confidence against him, the Appropriation Bill is not passed and when Parliament is dissolved.

The President shall be the head of the Caretaker Government during Parliamentary elections.

There shall be two Vice Presidents who shall be from communities other than the one to which the President belongs. They would be elected by Parliament.

(1) The Republic of Sri Lanka is founded on the following values:
(a) supremacy of the Constitution and the rule of law;
(b) representative democracy, human dignity, the achievement of equality and social justice and the advancement of fundamental rights and freedoms;
(c) racial, religious and gender equality; and
(d) universal adult suffrage, regular elections and a multi-party system of democratic government.

(3) The peoples of Sri Lanka who together constitute the People of Sri Lanka have the right to develop their own language, protect their own religion, to develop and promote their culture, to preserve their history and the right to their due share of State power including the right to due representation in institutions of government, without in any way weakening the common Sri Lankan identity. This shall not in any way be construed as authorizing or encouraging any action which would dismember or impair, totally or in part, the territorial integrity or political unity of the Republic.

5. The duration of Parliament shall be 5 years.

There shall be a Caretaker Government during the period of Parliamentary elections. It shall have the powers of the Cabinet of Ministers. The Caretaker Government shall consist of the President, the 2 Vice-Presidents and a member each appointed by the outgoing PM and the Leader of the Opposition who shall not be candidates at the Parliamentary elections.

The Eighteenth Amendment shall be abolished and the Seventeenth Amendment brought back with suitable amendments, including those proposed in the draft report of the Parliamentary Select Committee chaired by Hon. DEW Gunasekera.

(v) Five distinguished persons appointed jointly by the Prime Minister and Leader of the Opposition. Where any of the four major communities (Sinhala, Tamils, Muslims, Indian Tamils) are not represented in the Council, the Prime Minister and the Leader of the Opposition shall, in nominating persons for appointment to the Council and after consultation with Members of Parliament belonging to that community, ensure that a person to represent that unrepresented community is nominated for appointment to the Council.

(vi) One member elected by MPs who belong to political parties and independent groups other than those to which the PM and Leader of the Opposition belong.

Appointments to the following positions shall require the approval of the Constitutional Council:

Members of the following Commissions shall be appointed by the President on the recommendation of the Constitutional Council:

In the case of the Chairmen of such Commissions, the Council shall recommend three persons for appointment, and the President shall appoint one of the persons recommended as Chairman.

Restrict Cabinet to 25; The total number of non-Cabinet Ministers and Deputy Ministers shall not be more than 25.

The new electoral system would come into effect at first general election after the proposed Amendment comes into force. The ratio between MPs elected under the FPP and PR systems has to be agreed upon. Also, whether PR should be national, provincial or district. Reaching agreement on these issues will be a difficult task and if attempted now, the process is likely to get bogged down. This will have to be done under the new Parliament.

For the moment, the candidate could commit him/herself to a mix of FPP and PR, doing away with the preferential voting system and cross over provisions.

11. Cross-over of MPs
MPs elected on PR lose their seats if they cease to be members of the Party and such vacancies shall be filled by the party; MPs elected on FPP lose their seats but a by-election will be held. Consider whether the right to vote according to conscience when no whip has been issued should be included.

Presently, although an MP who loses membership of the Party loses his seat unless the Supreme Court holds that his expulsion is invalid, MPs go to the District Court and get an injunction, stalling disciplinary proceedings. This could be prevented by providing that the Supreme Court shall have sole and exclusive jurisdiction relating to disciplinary proceedings relating to MPs. This amendment need not wait till a new electoral system is agreed upon.

12. Bill of Rights- a new fundamental rights chapter
There is general agreement that the Bill of Rights mentioned in the National Human Rights Action Plan is a good basis for a new FR chapter. However, it has not been discussed enough in the country and, as such, this should come after some more debate, possibly along with electoral reform. Since the issue of the Right to Information has been widely discussed it can be introduced at this stage.

The candidate shall commit him/herself to a new Bill of Rights that improves on the present fundamental rights chapter by expanding the scope of civil and political rights and by the inclusion of social, economic, cultural rights as well as women’s and children’s rights.

The following provisions can be included immediately.

All existing laws and written laws, except personal laws, shall be read subject to the fundamental rights chapter.

The remedy for infringement of fundamental rights will be available against all State action. A fundamental rights application may be made by a relative or friend or in the public interest.
Although the President is non-executive, he would still perform executive acts on the advice of the PM. Such executive action shall be subject to judicial review.

The fundamental rights and language rights remedies shall be available against all State action. There shall be no time limit for filing an application, as is the case in writ applications. Public interest litigation shall be expressly permitted.

In the case of judicial action violating fundamental rights, compensation shall be paid by the State.

A Bill shall be Gazetted at least 2 weeks before being placed in the Order Paper. There will be no “urgent” Bills.

Post-enactment judicial review of legislation shall be permitted.

The Supreme Court shall have power to make a declaration that any law or statute made by a Provincial Council or any provision of any such law or statute is inconsistent with the Constitution is invalid to the extent of the inconsistency. However, in order to mitigate hardships that may be caused to persons by who may have acquired certain rights under the legal provisions being struck down, the Court may limit the retrospective effect of the declaration of invalidity or make an order suspending the declaration of invalidity for such period and subject to such conditions as would enable Parliament or a Provincial Council to take steps to make the impugned law or statute cease to be inconsistent with the fundamental rights chapter. The Indian Supreme Court has used the tool of “prospective over-ruling”, limiting the retrospective effect of a declaration of invalidity in appropriate cases. Section 172 of the South African Constitution expressly permits such limitation.

Article 84 (Bills inconsistent with the Constitution) to be deleted.

Provisions similar to those found in the 2000 Constitution Bill will be introduced.

An inquiry will be held, in the case of the Chief Justice by a committee consisting of three persons each of whom hold, or have held, office as a judge in the highest court of any Commonwealth country and in the case of any other judge by a committee consisting of three persons former or present Judges of the Supreme Court or the Court of Appeal. The procedure to be followed, the mode of proof, burden of proof and the standard of proof of any alleged misbehaviour or incapacity and the right of the Chief Justice or such Judge to appear before and be heard by such committee in person or by representative shall be provided by law.