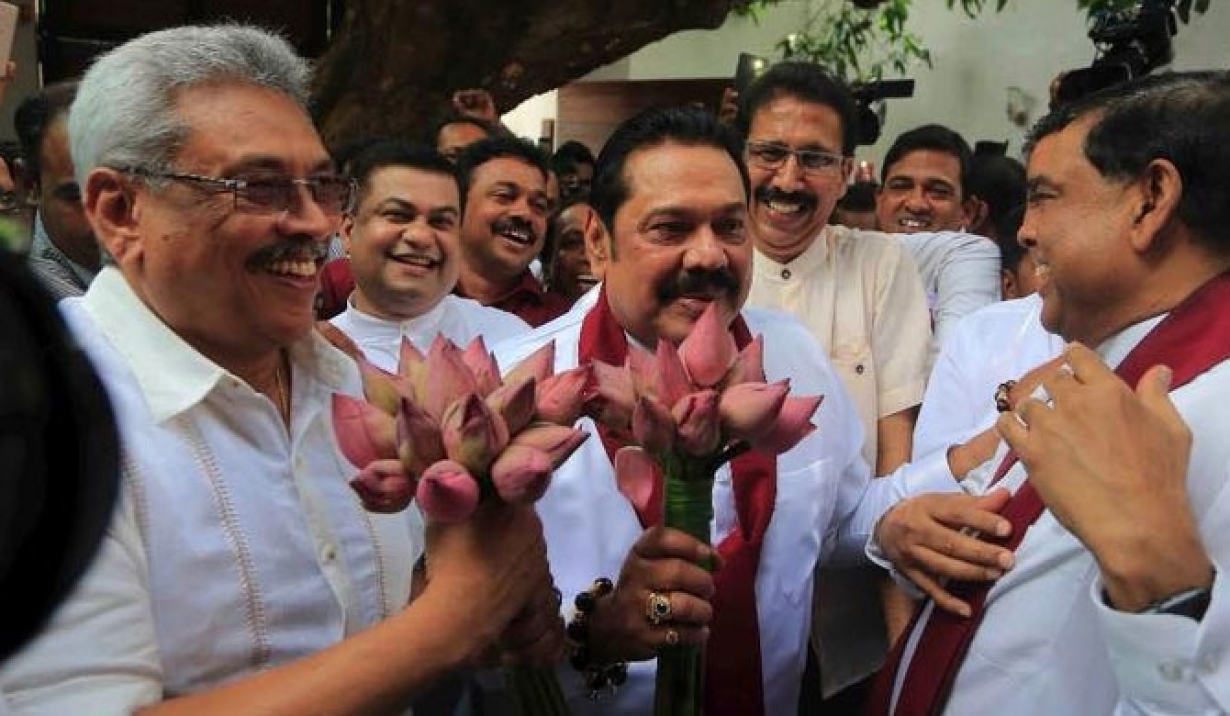 With all the debates, controversies and rigmarole surrounding the issue of abolishing 19A with 20A, and the demand from certain quarters for a new constitution, there is perhaps one historic outcome from the whole episode, and that is, the virtual establishment of hereditary rule by the Rajapaksa dynasty, at least in the short and medium terms.

This feat is about to be accomplished quite unobtrusively through the democratic process but with the help of some shameless Muslim parliamentarians. Sri Lanka earns another first in modern politics.

The Prime Minister, who is the patriarch of the family, earlier denied a rumour based on his disappointment and frustration that he intended to resign in two years, but vowed instead to continue in office for the entire five-year term, even though he would be virtually reduced, according to one constitutional expert, to the position of a “peon” during that period. The reason for his surrender is obvious. It is all in the family and there are several in line to continue that family rule in the foreseeable future

The direct and immediate outcome of this constitutional exercise is the re-emergence of an all-powerful executive presidency, originally created by JRJ. With little modifications, 20A will effectively roll back 19A, empowering the President and make him almost a virtual dictator. This reversal will in turn lay the foundation for the Rajapaksa dynasty to remain in power unless another Buddhist family rises to challenge its dominance.

In practical terms, the changes would result in the simultaneous empowerment and disempowerment of the President and Prime Minister respectively. What is so unique about this inter-positional power reshuffle is that it involves the status of two septuagenarian siblings of whom the junior is gaining at the expense of the senior.

Had it been two others from different families this transfer of powers would not have been as smooth as it is happening now. In fact, this was the crux of the problem for the unbridgeable split between MS and RW in the Yahapalana regime. The situation is exactly the opposite between MR and GR.

The Prime Minister, who is the patriarch of the family, earlier denied a rumour based on his disappointment and frustration that he intended to resign in two years, but vowed instead to continue in office for the entire five-year term, even though he would be virtually reduced, according to one constitutional expert, to the position of a “peon” during that period. The reason for his surrender is obvious. It is all in the family and there are several in line to continue that family rule in the foreseeable future.

Already five members of the Rajapaksa family are sharing cabinet portfolios and ministerial roles. Commanding sectors such as Defence and Urban Development, Law and Order, Economic Development, Finance and Planning, and Ports and Highways fall directly under them, and it was once reported, though denied later, that almost 70% of the national budget fell under their control.

With such control and influence, government departments and offices have become virtual appanages distributed within the family. Power corrupts and absolute power corrupts absolutely is an old dictum. Even otherwise, as Montesquieu said, “any man with power is led to abuse it; he is bound to find its limits”. But who is going to question the abuser when constitutionally gained omnipotence enables the President to control and shut every avenue of criticism and protest? He is above the law. Period.

The Rajapaksa dynasty will build its tower of dominance on the strength of three strong pillars: Sangha, the tri-forces and an ethno-centric Sinhala Buddhist business class.

Although historically, Sangha had been a highly respected institution that injected and monitored virtuosity in governance, in the current political climate its role goes beyond promoting virtuosity and into a commitment towards establishing at least a de facto, if not de jure Buddhist state in the country.

The most powerful prelates of the Sangha hold the supremacist view that Sri Lanka belongs only to Sinhala Buddhists and that only Buddhist manufactured laws should govern the whole nation. Behind the so called one country one law mantra lies this supremacist ideology. Homogenisation of Sri Lanka’s kaleidoscopic pluralism is the ultimate vision.

Rajapaksa stalwarts have not cleared the air about their commitment to this supremacist ideology except parroting inn public that there is freedom under their reign for all communities and religions.

From the running vocal encounters between pseudo-historians from both sides of the ethnic divide, provoked by the maiden speech by a Tamil representative in the new Parliament, in which he referred to the seniority of Tamil language and Tamils in Sri Lanka, one could understand how politically risky and dangerous would it be for the dominant family to distance itself from the supremacist position.

This is why President GR adamantly holds the view that the solution to Tamil nationalism is economic development and not power sharing. Given the Rajapaksas’ close alignment with supremacist prelates one could expect that even the India initiated 13th Amendment would be plundered of its

substance as a result of the amendments.

Like the Sangha, tri-forces, by virtue of the fact they are under the command of GR, will automatically provide support to the family. The changes GR introduced within those forces soon after he was elected in 2019, by promoting some, demoting a few and rewarding several, was to ensure that his wishes and orders would be carried out without questioning.

The military has become an inseparable arm of Government public administration under the new regime. The several Task Forces appointed by the President headed by military personal still continues with their terms extended.

Moreover, GR came to power on the issue of enhancing the security and sovereignty of the country, and no doubt he would extend that security to his dynasty also. While the Sangha would rally the masses behind the dynasty, the tri-forces will protect it from any threat from extremist elements.

Finally, the ethno-centric Sinhala-Buddhist business class is destined to make hay while the Rajapaksa sun shines. One of the reasons for the anti-Muslim violence that marked MR presidency before 2015 and Yahapalana regime after that was commercial envy.

The ubiquity of Muslim traders and the remarkable success of a few among them especially in Sinhalese districts was an eyesore to ultra-Buddhist nationalists reported to have been funded by a class of Buddhist businessmen. This class along with members of the Sangha worked hard to bring Rajapaksas to power. As long as the regime looks after the interests of this class the dynasty is assured of its backing.

Given this rosy scenario that promises at least short to medium term political stability even foreign powers like India and USA that are currently unhappy about Sri Lanka’s heavy tilt towards China, would prefer to resolve issues smoothly without embarrassing the regime too much to create instability.

Even though the economic and financial difficulties currently facing the country would tempt these powers to take mean advantage of the situation, a politically stable regime is diplomatically more preferable to build long term relationship than a regime mired in instability. This does not augur well particularly in relation to the Tamil issue.

Modi’s Delhi would like to strengthen its economic ties with Sri Lanka rather than rocking the boat by insisting on the implementation of the 13th Amendment. Similarly, USA’s MCC and SOFA would also become realities through negotiation with Rajapaksas much to the consternation of the regime’s opponents.

However, there is one important element that can create a headache and nightmare for the rulers. The economy, which had started sliding already under Yahapalana is collapsing under the Rajapaksas, because of the pandemic and global recession.

The economy will be the number one enemy for the dynasty and the first budget of this Government will show the gravity of the situation. The future of the country’s exports, prospects of foreign investment inflow, declining foreign remittances, declining tourism revenue, pressure of national debt, falling public revenue and increasing budget deficit and so on are issues that cannot be tackled in ad hoc manner. There is need for a comprehensive plan for economic revival.

The economy will be the number one enemy for the dynasty and the first budget of this Government will show the gravity of the situation. The future of the country’s exports, prospects of foreign investment inflow, declining foreign remittances, declining tourism revenue, pressure of national debt, falling public revenue and increasing budget deficit and so on are issues that cannot be tackled in ad hoc manner. There is need for a comprehensive plan for economic revival

President GR is issuing economic directives without an overall strategy. His idea of achieving self-sufficiency in food and condiments is good but by simply banning imports he is not going to achieve it. There is one fundamental requirement for solid economic revival, and that is the need for national unity.

GR’s grand vision of “prosperity and resplendence” cannot be achieved without national disunity, and that unity cannot be forced upon the communities. It has to evolve from below out of mutual cooperation, understanding and tolerance among the different components of the nation’s plural polity.

The regime’s refusal to distance itself from demagogic Buddhist nationalism is a bulwark to achieve it. When economic disaster combines with inter-ethnic and inter-religious convulsion that would be the recipe for the collapse of the ruling regime and the ruling dynasty along with it.