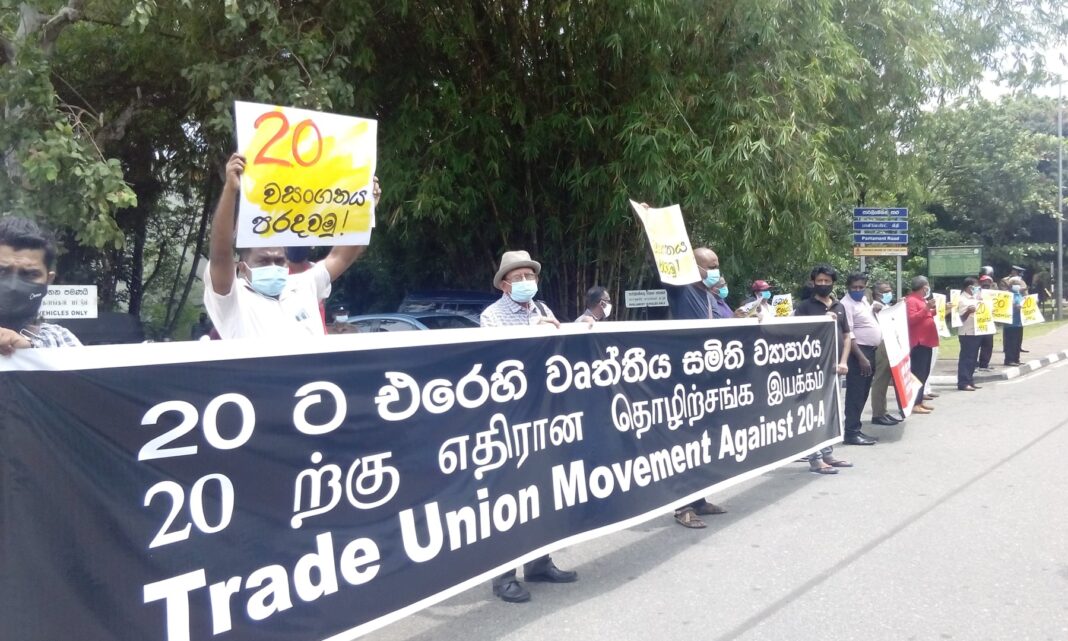 One of the most striking characteristics of the two years of governance of the current regime is its confusion in decision making as well as implementation of its own decisions. This has been manifest in its handling of the fertiliser issue, gas issue, milk powder issue and electricity issue to name just a few.

At a time when the country is faced with the worst economic crisis in its history, the efforts of all sections of the community needs to be harnessed in order to rebuild the economy. It is here that the reconciliation process has to be activated and strengthened in order to give an impetus to nation building.

Unfortunately here too the Government has been found wanting. By its acts of omission and commission the Government has shown its ideological aversion to reconciliation thus undermining the nation building effort that the country badly needs.

The first indication of the Government’s intentions vis a vis reconciliation was revealed when it presented the 20th Amendment to the Constitution.

When the Yahapalana Government enacted the 19th Amendment it made an important and significant addition to the duties of the President by making the promotion of “national reconciliation and integration” as a Constitutional duty of the President.

The 20th Amendment repealed this clause thus making it doubly clear that National Reconciliation was not one of the Government’s priorities.

When the armed conflict between the State and the LTTE ended in 2009 during the tenure of the Mahinda Rajapaksa Presidency, all expectations turned towards healing the wounds brought about by the war in the people and also addressing the root causes of the conflict.

Unfortunately this was not to be and apart from an incomplete Constitution reform process initiated by the Yahapalana Government the country has not seen any progress in this regard.

A meeting between President Gotabaya Rajapaksa and a delegation of the Tamil National Alliance to discuss the current Constitution Reform process was to be held on June 16, 2021 but was cancelled by the Government at the last moment. No date has been fixed for the talks as yet and addressing the grievances of the Tamil people as articulated by its political representatives remains in abeyance.

The Government has opened another front in the reverse Reconciliation process by targeting the Muslim community. After conducting an Islamaphobic campaign at the Presidential and General Elections, after assumption of office by its acts of omission and commission, the Government is in the process of alienating the Muslims from the State.

While the list of such acts is long, a few of the more recent ones serve to underline the unease within the community. The Justice Minister M. U. M. Ali Sabry has obtained approval from the Cabinet for the abolition of the Quazi Courts system and the right of Muslims to enter into Polygamous marriages which strikes at the root of the Muslim Personal Law.

Further the President has appointed a Task Force to make recommendations on the so called “One country One Law “ concept. Venerable Galagodathe Gnanasara Thera who is well known for his hostility towards Islam and the Muslims has been appointed as the Chair of this Task Force giving credence to the belief that the Task Force was set up targeting the Muslim Personal Law.

The Task Force has now gone beyond its remit and begun interfering in other matters as well. The Sunday Times last week reported that the Education Ministry has with immediate effect recalled the Islam text books for Grade 6, 7, 10 and 11 after the Presidential Task Force for ‘One Country, One Law,’ raised concerns over the contents of the books.

Mr. Illapperuma had told the Sunday Times those books contained some objectionable words according to a communication his office received from the Presidential Task Force and the Institute of National Security Studies, a think- tank that comes under the Defence Ministry, on the need to review the contents of the books since they might contain ideas of extremist ideology.

According to the Sunday Times report the One-Country-One Law Presidential Task Force had pointed out that the Presidential Commission to investigate Easter Sunday attacks had stated: “All religious educational books published for the use of students in national and provincial schools as well as international schools should be scrutinised to ascertain whether any extremist or terrorist literature is included directly or indirectly.”

The Task Force’s statement is ironic when taken in the context of the strictures passed on the Chairman of the Task Force by the Presidential Commission which recommended that action be taken against him.

Adding to the Muslim community’s fears was the visit to Kuragala by President Gotabaya Rajapaksa, who despite the multiple crisis faced by the country found the time to visit the area. The ancient Dafter Jailany shrine which is administered by the Wakf Act was for a long time managed by the family of the respected M.L M. Aboosally a former UNP Minister and Parliamentarian until some claims have been made by a few Buddhist Organisations in recent times.

During his recent visit to Kuragala President Rajapaksa inspected the development work of the Kuragala temple and directed that the work on the dagoba, Buddha statue, and dharma hall be expedited.

Meanwhile the Government has been on a collision course with the Catholic community who have been fighting for justice for the victims of the Easter Sunday terrorist attack. His Eminence Cardinal Malcolm Ranjith has been calling for comprehensive investigations and the identification of the mastermind behind the attack.

The Government’s response to this call has further alienated the Catholics who are still grieving for the victims and would like those behind the attacks to be called to account. The Government seems to be totally insensitive to the call for searching out the Truth.

As much as the Government needs to get its act together on the economic front, it needs to reverse its approach to reconciliation. If the Government can do so it will benefit the country in the long run ([email protected])