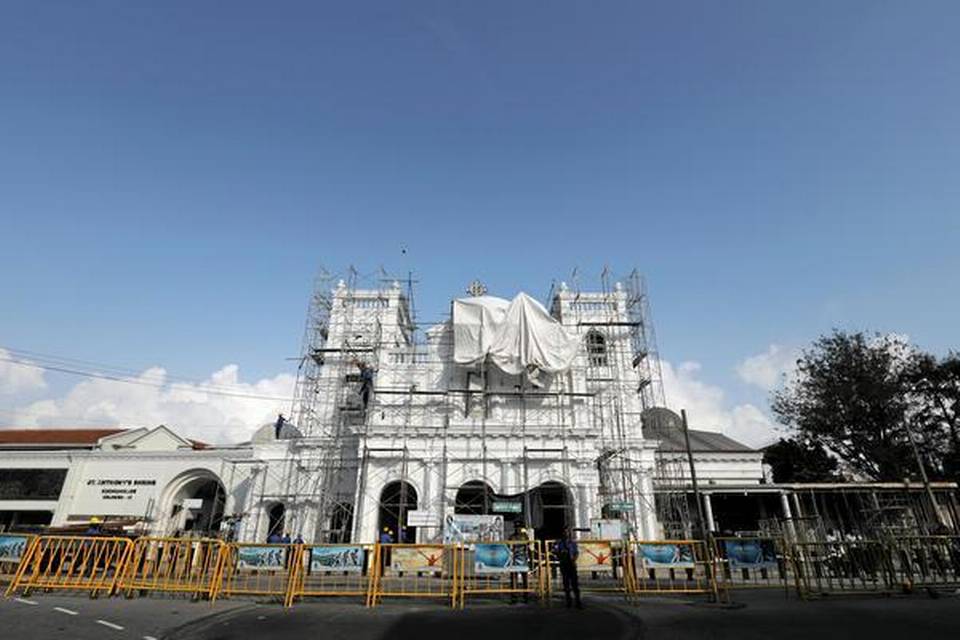 Image: Under repair: The St. Anthony’s church, one of the churches attacked last year on Easter.   | Photo Credit: REUTERS

Lawyers and activists have flagged apparent lack of adherence to due process by police during investigation into the 2019 bombings.

As investigators in Sri Lanka move into the “final stages” of the probe into the April 2019 Easter terror bombings, concerns over apparent lack of adherence to due process have risen from several quarters.

Sri Lanka police recently said they are about to conclude investigations of the deadly serial bombings that claimed 279 lives last year; having arrested over 200 suspects in connection with the case. However, as more arrests make headlines, lawyers, civil society activists and rights groups flag apparent lapses in adherence to the law. In particular, the April 14 arrest of attorney at law Hejaaz Hizbullah has drawn much attention. The lawyer has been in detention for two months after he was arrested under Sri Lanka’s draconian Prevention of Terrorism Act (PTA) that civil liberties activists have long wanted repealed. The former Maithripala Sirisena-Ranil Wickremesinghe government, having promised to repeal the Act, didn’t.

Neither was a reason given at the time of his arrest — police later told media that it was in connection with Easter bombings — nor has he been produced before a magistrate since his arrest nine weeks ago. The Colombo Fort magistrate recently instructed the Criminal Investigation Department (CID) to produce him on June 24. After multiple requests, Mr. Hizbullah was granted access to his lawyers for a few brief meetings, that too in the presence of CID officials, in whose custody he has been.

According to police sources, the lawyer’s detention order was signed by President Gotabaya Rajapaksa. “Investigators will not detain someone without reason or evidence. There has been no violation of due process in this probe,” police spokesman Senior Superintendent of Police (SSP) Jaliya Senaratne told The Hindu.
Meanwhile, his family has filed a fundamental rights petition at the Supreme Court, challenging his detention. Further, the arrest of the lawyer — an establishment critic, who rose to prominence after the 2018 constitutional case challenging then President Sirisena’s abrupt dissolution of the Parliament — sparked concern among local and international actors.

“Most alarmingly, Mr. Hizbullah has been denied access to his family and even lawyers except for a brief 15 minutes with an Attorney-at-Law under the scrutiny of an eavesdropping CID officer. This does not constitute due access to one’s lawyer,” a statement signed by 158 lawyers said. Civil society representatives issued a statement saying, “the most troubling aspect” of the arrest was CID officers having allegedly accessed two case files of Mr. Hizbullah, which amounted to a “severe impingement of attorney-client privilege”.

In a tweet on May 26, the Delegation of the European Union to Sri Lanka said it had written to Sri Lankan authorities expressing “deep concerns” over Mr. Hizbullah’s arrest, while renewing calls to review Sri Lanka’s 40-year-old counterterrorism legislation [PTA].

Citing his arrest, among other incidents, in its recent report on ‘eliminating religious intolerance’, Human Rights watchdog Amnesty International said: “With the new government still in its first year, the frequent incidents of demonisation, vilification and scapegoating of Sri Lanka’s Muslim population are a cause for great concern,” referring to different instances of discrimination and violence targeting Sri Lanka’s Muslims in the last few years.

This is not the first time Mr. Hizbullah has been questioned in connection with the terror blasts. In May last year, the CID team probing the case — it was reshuffled after the November 2019 elections — obtained statements from him “a few times”, a source familiar with the investigation told The Hindu. Mr. Hizbullah had been counsel for spice trader Y.M. Ibrahim’s family — his two sons were among the nine suicide bombers who carried out the Easter attacks — on business matters. Investigators found “no evidence of any other link” with the Ibrahims, the source told The Hindu, requesting anonymity, citing the sensitivity of the ongoing investigation.

It is not only Mr. Hizbullah’s arrest that is being questioned. Last month, at least three fundamental rights petitions were filed in the Supreme Court of Sri Lanka, on behalf of minor boys, challenging the “intimidation” and “oppressive behaviour” of the CID, when it interrogated them on the activities of a charity that Mr. Hizbullah was involved with, which reportedly funded the madrassa they attended in Puttalam town.

While Sri Lankans, including government critics, would like to see the Easter investigations completed, it is due process that will inspire public faith in the outcome, legal experts observed.

According to senior constitutional lawyer and civil liberties columnist Kishali Pinto-Jayawardena, the “crucial flaw” affecting credible investigation into any ‘high profile’ crime in Sri Lanka, not just the Easter Sunday bombings, is its “capture by the political arm of the State”. “Public faith in the transparency of the Easter Sunday investigation now, as well as the Parliamentary Select Committee charade during the previous regime, is minimal because in the final outcome, these politicians protect each other,” she told The Hindu.

Due process, she said, means that, at the time of arrest, state agents must have credible and objective reasons for arrest, not that, after the arrest, “something is cooked up” as a justification. “We have handled scores of constitutional violations where the Supreme Court has very clearly laid down this principle. But none of these seem to matter anymore. Lawyers themselves risk punitive punishment for following their professional pursuits,” she said.