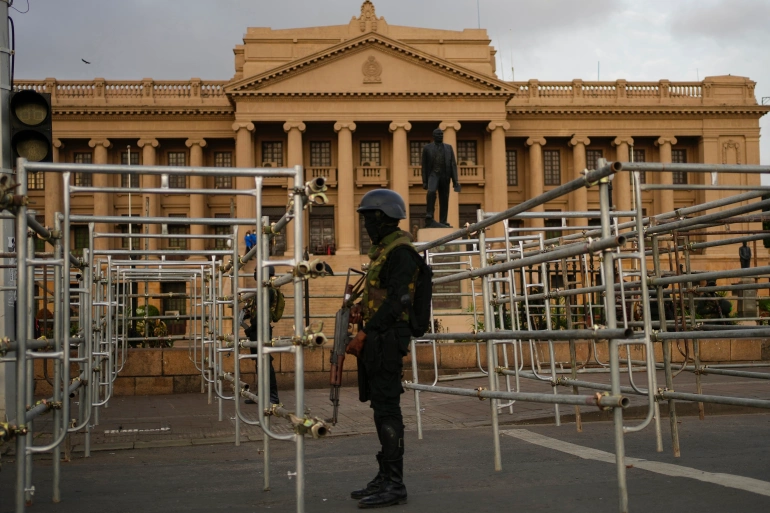 The arrest is part of an ongoing crackdown against people protesting against the government over the country’s worst economic crisis in decades.

Colombo, Sri Lanka – The arrest of a top protest leader as part of an ongoing crackdown and intimidation of people protesting against the government over the country’s worst economic crisis in decades has raised concerns.

Joseph Stalin, the secretary of the Sri Lanka Teachers’ Union, was arrested from his office in the capital Colombo on Wednesday.

Stalin was arrested for participating in a large protest march on May 28 to mark 50 days since the launch of “aragalaya”, the Sinhala word for “struggle”, demanding the resignation of the government over the economic meltdown.

Stalin is the most senior trade union leader to be arrested since Ranil Wickremesinghe took over the presidency on July 20 following the resignation of Gotabaya Rajapaksa on July 14.

But the protesters, who blame the Rajapaksas for the island’s crisis, accuse Wickremesinghe of protecting the clan and want him to quit as well.

“The ongoing crackdown on dissent in Sri Lanka by the government of Ranil Wickremesinghe is worse than any under Gotabaya Rajapaksa’s administration,” said Alan Keenan, a senior Sri Lanka consultant for the International Crisis Group.

“The work of human rights defenders like Joseph has been more important than ever in recent weeks and must be supported, not punished,” she tweeted.

‘Ranil too should be arrested’

On May 28, tens of thousands of students, teachers, trade unionists, artists and activists walked for several kilometres, converging at GotaGoGama, the seaside protest camp adjacent to the presidential secretariat which is the epicentre of the months-old protest movement.

“It was very clear that not only the UNP as a party supported that protest on May 28, it had the clear blessings of Ranil Wickremesinghe too,” Ravi Kumudesh, the co-convenor of the Trade Union Coordination Centre, told Al Jazeera.

“If Joseph Stalin has committed an offence, clearly Ranil has also committed the same offence. Then Ranil too should be arrested,” Kumudesh said.

Interestingly, addressing the parliament as the sole UNP member in July last year, Wickremesinghe had warned of serious consequences after Stalin was arrested by the-then Rajapaksa administration.

“Exactly a year after that arrest, Ranil who warned of serious consequences does the same as the executive president,” Kumudesh told Al Jazeera.

He accuses Wickremesinghe, who came to power as a result of ‘aragalaya’ of “trying to create a crisis to stay in power as he doesn’t have even a minimum programme to come of the current mess”.

Several other protest leaders have also been arrested on charges of damage to public property during the occupation of government buildings last month.

Others, some of whom were assaulted during a military attack on the protesters on July 22, have gone into hiding following threatening phone calls and visits to their houses by the police.

Reverend Father Jeewantha Peiris, a Catholic priest camping at GotaGoGama, has filed a petition asking the courts to stop his possible arrest.

Wickremesinghe denies accusations that he is on a mission to hunt the protesters.

Addressing the parliamentarians after ceremoniously opening the parliament on Wednesday, he said, “Some groups are trying to spread a huge propaganda through social media that I am hunting down the protesters. But it is not true. I will not allow any kind of prejudice to the peaceful activists. I will establish an office to protect the peaceful protesters and support them.”

Wickremesinghe said that peaceful struggle is a fundamental right. “I accept those rights. However, if there are individuals who intentionally violate the law and engage in violent and terrorist acts, legal action will be taken against them.”

Only hours after the new president delivered his address, Stalin’s office was raided by the police.

Kumudesh said the law does not seem to be applying to everybody equally in the country.

“We remind Ranil that he was appointed by Rajapaksas’ party MPs, not by the people of this country,” he told Al Jazeera.

“Now it is your duty to come up with a proper reform agenda, not to crack down on protesters. We know you don’t have such a plan.”