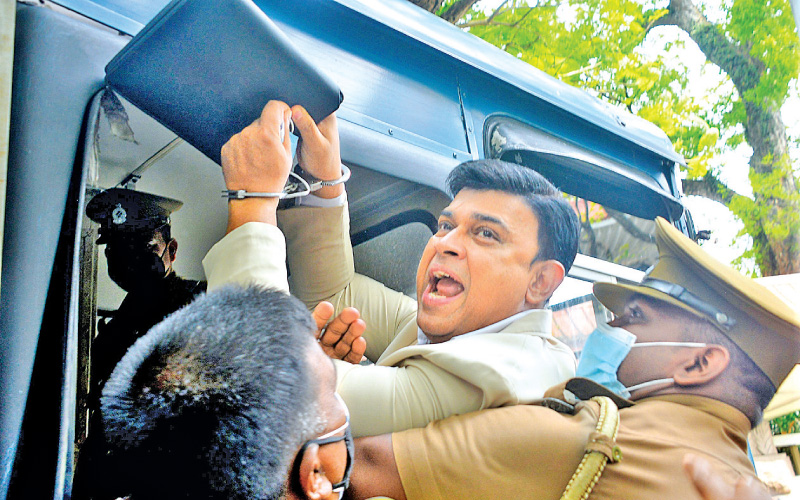 Confusion has been worse confounded in the public mind following the conviction this week of politician and self-proclaimed corruption crusader Ranjan Ramanayake for contempt of court by the Supreme Court for allegations made in 2017, that ‘a majority’ of lawyers and judges in Sri Lanka were corrupt. This acute confusion must be set to rights, sooner rather than later.

As an aside, those carelessly exaggerated words, ‘ a majority’ was what returned to haunt Ramanayake now embarking on a four year jail term as he struggled to explain in proceedings in Court that, what he actually meant was that lawyers were corrupt and worked for money. That lawyers work for money is self-evident and needed no further excited blabbering in front of television cameras. That said, whether the inference of ‘corruption’ can be drawn merely by this fact is a different question altogether.

Even so, the question before the Bench was limited to his claim that ‘a majority’ of the Lankan judiciary was corrupt. This was not only said on one day in consummately brash Ramanayake style but repeated several times later, even  after contempt charges had been filed. It was this repetition that inclined the Court towards not accepting his explanation that including the judiciary in his statements was by a slip of the tongue. So, some pertinent questions need to be clarified.

First and foremost, contrary to what some attention seeking alarmists claim (who, it is a fair bet to assume, would not have bothered to read the Court’s decision), criticism of judges, the judiciary and judgments are not frozen in time as a result of this ruling. This is said as reassurance to many who will be wont to shiver and shake to even comment critically on judicial rulings. That should not be the case, let it be said quite clearly. In other words, the principle here, is of temperance, of substantiation, of legitimate criticism and choosing one’s words measuredly. Fair comment on judgements has always been an accepted principle in functionally democratic countries.

Confining contrasts and comparisons to each case

There is nothing very new here as a result of this particular ruling. True, the four year rigorous imprisonment sentence imposed on the flamboyant politician who let his unruly tongue, (and his accursed tape conversations with judges) run away from him, has led to considerable public concern. This is being contrasted by some against alleged murderers being freely set free in other circumstances. These comparisons, though emotive, are not quite fair. The context of each case is peculiar to its own. Let those discharges, acquittals and other sundry releases of grand corruptors, killers and torturers be assessed (mercilessly) on their own demerits.

But to return to our main focus, there is an urgent need for enactment of a contempt law for Sri Lanka, irrespective of the Ramanayake ruling. In stressing the criminal nature of the act in question in this case, it is interesting that the Bench quoted England’s onetime Master of the Rolls, Lord (sic) Denning as saying that, ‘a contempt of court is an offence of a criminal character… a man may be sent to prison for it.’ Broadly, this is true of course. England and India, though recent practice India has been disturbing as we will see, have contempt laws defining civil and criminal contempt as well as prescribing punishments. No man or woman on the Clapham Omnibus, as it were, can turn around and say that he or she did not know that a particular action would not attract a ruling on contempt or that, a punishment meted out was not fair or proportionate.

This is unlike in Sri Lanka, I may add, which has been (typically) struggling to codify principles on contempt of court for decades. That said, there is a specific context to that quote by a British judge who was himself, most notable for shrugging aside perceived affronts to the Court. This extended, it must be recalled amusingly, to keeping his calm most impressively when a litigant who was dissatisfied with a particular ruling that he delivered, threw a book at him while he was on the Bench. Later, he recounts that he was complimented by that same litigant for his ‘coolness under fire’, (The Due Process of Law, 1980). So context is important in these matters.

Indeed, the British Courts have been very strict in using its contempt powers where there is disobedience to its Orders. This is, in fact, the context in which Lord Denning emphasized the criminal nature of the offence (In Re Bramblevale Ltd, 1970), quoted by Sri Lanka’s Supreme Court in the Ramanayake ruling. But contempt rulings and jail terms for writings or speech critical of the judiciary are exceedingly rare. The reason for this, as explained by Lord Denning himself, is that, ‘we will never use this jurisdiction as a means to uphold our own dignity. That must rest on surer foundations.’

Why that must remain so is set out cogently by him in reasoning that has echoed down the ages. Thus, contempt powers will not be used to suppress those who speak against judges as ‘we do not fear criticism, nor do we resent it. For there is something far more important at stake. It is no less than freedom of speech itself.’ In that same breath, he added that, every effort of the Court must be to preserve the right of fair comment, even if it is outspoken at times and that, ‘we must rely on our own conduct itself to be its own vindication.’

What amounts to ‘fair comment’ have been amply explained in precedents across the Commonwealth. Even so, such safeguards are less useful if a Court is determined to prevent justifiable criticism of itself. We saw this recently across the Palk Straits when the Supreme Court found prominent constitutional advocate Prashant Bhushan guilty of contempt of court over two tweets that he posted which was critical of the Chief Justice of India as well as the long hiatus that the Court took in its sittings over the intensified spread of covid-19 in New Delhi.

The Bar must activate itself, at least on this

Outrage swept the land uniting scholars, members of the Bar and even retired judges in what was seen as an outrageous attempt by the Supreme Court to stifle freedom of expression. Finally, it was the Court which blinked first in this unprecedented standoff, sentencing Bhushan to a token fine of one rupee. However, the precedent that the Indian Court set was ominous for the region as I observed at the time in a guest contribution to India’s ‘The Wire, August 28th 2020. In this case, the apex Court of India acted on its own powers, utilising constitutional provisions which gave it unfettered discretion to impose any kind of punishment.

Remarkably, in so doing, it disregarded the country’s own contempt of court law which specifically prescribed fair procedures and punishments thereto. Enraged by this ruling, the Indian Bar, constitutional advocates and citizens have commenced a call for reform of the Indian contempt law. For Sri Lanka, much effort has already gone into similar efforts, including more than a decade ago when the Bar Council, during the Presidency of the late Desmond Fernando, appointed a committee to draft a draft contempt law on which this columnist served. However, these efforts have not been successful.

At least on this, the currently grievously somnolent leadership (if it can call itself that) of the Bar must activate itself. It may look to the Indian Bar as an inspiring example thereof.