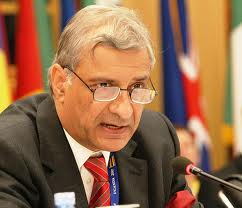 While expressing extreme disappointment over the dismissal of the Chief Justice of Sri Lanka, Commonwealth Secretary-General Kamalesh Sharma on Sunday said he would also consider further Commonwealth initiatives and responses as are envisaged in situations that could be perceived to constitute violations of core Commonwealth values and principles.

Issuing a statement, the Secretary-General recalled his earlier statements about this matter, in particular his statement following the decision by Parliament on January 11 to impeach the Chief Justice, in which he had urged the Executive to pause and reflect carefully on the constitutional ramifications of the differing positions taken by the country’s Judiciary and Legislature.

Reiterating the Commonwealth’s profound collective concern at the recent developments and noting the deep divisions this had caused in Sri Lanka, the Secretary-General said, “the dismissal of the Chief Justice will be widely seen, against the background of the divergence between the Judiciary and the Legislature, as running counter to the independence of the judiciary, which is a core Commonwealth value.

“I have been in touch over the recent days with the Government of Sri Lanka at the highest levels and had offered Commonwealth assistance to find a way forward from the constitutional impasse. I will continue to remain engaged with the Sri Lankan Government following today’s developments. I will also consider further Commonwealth initiatives and responses as are envisaged in situations that could be perceived to constitute violations of core Commonwealth values and principles,” he said..

The Secretary-General will be visiting Sri Lanka in February.
DM