Cluster bombs in Sri Lanka: From denial to discovery

Ravi Nessman from Associated Press has broken what’s perhaps the most important story on the war, since it ended three years ago. In a story published by AP a few hours ago, he notes,

The Associated Press obtained a copy Thursday of an email written by a U.N. land mine expert that said unexploded cluster bomblets were discovered in the Puthukudiyiruppu area of northern Sri Lanka, where a boy was killed last month and his sister injured as they tried to pry apart an explosive device they had found to sell for scrap metal.
The email was written by Allan Poston, the technical adviser for the U.N. Development Program’s mine action group in Sri Lanka.
“After reviewing additional photographs from the investigation teams, I have determined that there are cluster sub-munitions in the area where the children were collecting scrap metal and in the house where the accident occurred. This is the first time that there has been confirmed unexploded sub-munitions found in Sri Lanka” the email said.

Emphasis ours. The incident noted in Ravi’s copy was actually reported in the Tamil media on 6th March 2012. 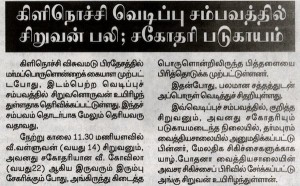 The story on Sudar Oli, published on Page 7 notes,

An explosion in Killinochchi kills a boy: His sister sustains serious injuries
From Vishamadhu, Killinochchi, comes the report of a death of a boy, who had tried to examine a metallic object. The details of this incident are as follows.
Yesterday (5. March 2012) at around 11.30am, V. Villuwan (14) a small boy and his sister, V. Kovila (22) were collecting metal when they tried to remove the copper off a metallic object. At this moment, there was an explosion with a huge sound.
Seriously injured from the explosion, both children were admitted to the Dharmapuram Hospital. Afterwards, they were transferred to the Jaffna Hospital’s emergency ward, at which time the boy succumbed to his injuries.

It’s very important to track the Sri Lankan government’s denials over the use of cluster munitions. Last updated on 19 August 2011, the Landmine and Cluster Munition Monitor notes,

Sri Lanka has said that it does not possess cluster munitions. The Sri Lankan government’s Media Center for National Security issued the following statement on its website in February 2009: “The Government wishes to clarify that the Sri Lanka army do not use these cluster bombs nor do they have facilities to use them.” The Ministry of Defence website posted a statement saying Sri Lanka never fired cluster munitions and never brought them into the country. In February 2009, a military spokesperson was quoted stating, “We don’t have the facility to fire cluster munitions. We don’t have these weapons.”

Emphasis ours. On Page 47 of the UN Panel of Experts report, allegations of cluster munitions use are noted along with denials from the Sri Lankan government,

One of the most categorical denials came from Palitha Kohona, an Australian national who at the time was Secretary of Foreign Affairs and is currently Sri Lanka’s top ranking diplomat to the UN in New York.
In the interview with CNN, Kohona explicitly notes to a question by the anchor, Monita Rajpal, whether the Sri Lankan Army is using cluster bombs,

There have been a number of reports in web media in particular on the use of cluster bombs. Coincidentally, in a report published on 21 March 2012 on Tamilnet.com, which is blocked in Sri Lanka, it is reported that “a container allegedly deployed by the Sri Lanka Air Force (SLAF) to carry cluster bomblets has been recovered recently by the de-miners of the humanitarian de-mining agency Halo Trust near a house at Thiruvaiuyaa’ru, 3 km east of Ki’linochchi town”. A PDF copy of the story, which also contains an image of the cluster bomb container, can be seen here. In January 2009, the same website carried images of cluster bombs allegedly dropped by the Sri Lankan Airforce in Mullaitivu. A PDF copy of the story, along with images, can be seen here.

On 22 April 2009, the Guardian ran a story on the use of cluster bombs in Sri Lanka, which noted that,

Cluster bombs and artillery shelling have killed many civilians at a makeshift hospital within the last strip of Sri Lanka’s coastline still controlled by the Tamil Tigers, a doctor said today. Thangamutha Sathiyamorthy is a doctor working at the hospital in Puttumatalan.
Sathiyamorthy claimed that there had been a number of cluster bomb attacks, one of which killed a doctor, Dr Sivamanokaran, in the temporary hospital at Valayadmadam.
“The hospital yesterday was functioning and the doctor visited that area and there was a blast that is a cluster bomb and so he died in the hospital area,” he said.

In another news report published on IBM Live much earlier, on 4 February 2009, it was reported that,

Cluster bombs have been used in the war in Sri lanka for the first time since the collapse of a Norway-brokered ceasefire in 2007. The bombs were used near a civil hospital in Puthukudiyiruppu. It is not clear if they were used by the Lankan military or the tigers.
The organisation’s spokesperson, Sarasi Wijeratne couldn’t say who fired the shells. But Dr Thurairajah Varatharajah, the top Government health official in the area, said the attacks appeared to have come from the army.
Earlier we spoke to Gorden Weiss, the UN Spokesperson in Colombo who said that cluster bombs have been thrown in the vicinity of the hospital.

Revealingly, the three government doctors who claimed high civilian casualties and the use of cluster bombs by the Sri Lankan Army were rounded up and under duress, forced to retract their submissions. Though widely suspected, it was only after the Wikileaks cables were published that exactly why they contradicted their earlier submissions was confirmed.

Other prominent government spokesman were more outright in their dismissal of concerns by the international community over the use of cluster bombs. Prof. Rajiva Wijesinha, in February 2009, called those in Amnesty International “lunatics” and their concern over the use of cluster bombs by the Sri Lankan army “rank idiocy”.
Did the Sri Lankan Army use cluster bombs and phosphorus bombs against civilians?, published in September 2010 on Groundviews, translated a lead story published in the Sudar Oli newspaper based on the testimony of one N. Sundermurthi to the Lessons Learnt and Reconciliation Commission (LLRC). As we noted at the time, not a single English or Sinhala mainstream print or broadcast media carried this story. Sundermurthi’s testimony notes,

There are, at the time of writing, a 112 comments to this story, and most of the commentators vehemently deny the use of cluster bombs, noting that there is no way Sundermurthi could have known what kind of munitions were used and fired. At the time, Sri Lanka’s top ranking diplomat at permanent mission of Sri Lanka to the United Nations at Geneva, and currently Ambassador to France, with accreditation to Spain and Portugal, and Sri Lanka’s Permanent Delegate to UNESCO, Dr. Dayan Jayatilleka first roundly dismissed the report, and then said that the story was Sri Lanka’s equivalent of WMD’s (in Iraq). Another commentator, David Blacker, noted,

The witness’ testimony is quite useless on the point of whether or not cluster bombs and phosphorous was used by the SLAF. The witness merely states as fact that these weapons were used. There is no description of the weapons in action, the detonations or impact, nor of any residue, damage or injury caused. None whatsoever. The witness could just as easily have said that the SLAF used tactical nuclear weapons.
As an aside, artillery units use white phosphorous (WP) shells as marker rounds for forward observers, and often the explosions and residue from these rounds are mistaken for offensive weapons.
Overall, as TT says, the witness’ statement seems a bit contrived, as if he has been fed a few keywords (DPU, cluster bombs, phosphorous, etc) and is trying to work them into his story. The skeletons he describe probably were from a cemetery having been shelled or bombed. In general, civilian statements on artillery exchanges are often sketchy, with witnesses unable to accurately discern direction, especially at close range.
Given all of this, is it really surprising that no other newspapers bothered with this?

This analysis was backed up by Dr. Jayatilleka. Blacker went on to accuse Groundviews of being a “tabloid” and “sensationalist publication” for republishing in English Sundermurthi’s testimony to the LLRC.

It remains to be seen how the Government will answer the UN’s confirmations, based on its technical expertise, that there are in fact unexploded cluster munitions still in and around the Puthukudiyiruppu area. Perhaps because it trusted government reports, that the UN itself was wholly unprepared to deal with unexploded cluster munitions is evident in the leaked UN email. As AP’s Nessman notes,

Poston’s email, dated Tuesday, said mine clearers in Sri Lanka had not been prepared to deal with the bomblets, and are now relying on the experience of deminers who had worked in Lebanon, where Israel used cluster munitions in its 2006 war.
One deminer with experience in Lebanon was asked to clear the area and train other teams in how to handle the bomblets, according to the email. The local mine clearing office is adopting the Lebanon standards, and UNICEF was informed of the need to educate the local population about the dangers of the unexploded munitions, it said.

What new levels of spin, deception, counter-claims, propaganda and hate speech through spokesmen, Ambassadors, advisors and other assorted apologists will the government employ to counter this damning new evidence of what can constitute war crimes by the armed forces? If vehement denials of cluster bomb use by the government turn out to be false, what command chain responsibility implications will it have?
Groundviews Features