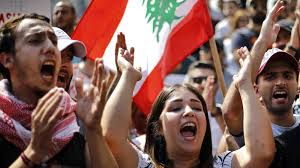 Image: Three weeks of non-stop demonstrations demand jobs (unemployment is 35%), an end to corruption and resignation of the Lebanon government are ongoing.

At no time since 1848 in Europe has unrest, rebellion, street fighting and mob rule erupted as much as in 2019. This time it is worldwide – South America, Africa, the Middle East, Asia and Europe. I will work up a list half-way down this essay. Sri Lanka at this moment is quiet. That’s because a presidential election is pending and it is also a periscope into the next general election. Unrest cannot breakout unless incited by the business, ex-military and political throng mobilising in support of Gotabhaya Rajapaksa’s presidential bid (the Shangri La class); and unless executed by the subaltern hoi polloi that constitutes his ballot-box fodder, the certainty ‘Gota is coming’ keeps both Shangri La throng and petty bourgeois ultras quiet, but in rapt anticipation.

If he does come back the ambitions of the Shangri La lot will be fulfilled if it accepts – it will be cowed into accepting – a “combination of private liberty and public despotism” – quoting DCP Amerasekere; The Island 28 October. The riot act that will be read to it is: ‘Go enrich thyself but shut up about my use of state-power. You want riches or you want to monkey with liberty, equality and strikers running amok?’ Still DCP has a point; liberalism all over the world is on the run. He pictures Gota offering authority, discipline and no pussyfooting. Though he does not verbalise it his bent is palpable: “Come on Sri Lanka, cut a deal, that’s the way out of our impasse”.

Corralling into a constricted political and intellectual space is false. I will return to this falsity after a digressing to the state of the world where in everywhere there is unrest and governments are under pressure to quit. The number is large and diverse; I have to limit my sample to a dozen. Diverse yes, but there is commonality in socio-economic drivers and in psychological (cultural-nationalist-sectarian) banality. Take a step back, the common thread can be seen but what relevant to the discourse on Sri Lanka is that nowhere would authoritarianism constitute a solution to crisis.

Three weeks of non-stop demonstrations demand jobs (unemployment is 35%), an end to corruption and resignation of the government. Road blocks, banks, businesses, universities and schools closed, and now running battles between different sides. Prime Minister Saad Hariri has resigned but there is no pause in the bedlam. Sectarianism rides unchallenged. There is a power vacuum and a stable alternative government is nowhere on the horizon.

The poster child of IMF-policies, President Sebastian Pinera was compelled to throw out his entire Cabinet but he may not survive the veritable uprising against free-market economics. Thanks to these policies and unsurprisingly Chile’s economy is the most “successful”, its society the most unequal in Latin America. The big gripes are the cost of medical and public services and universities and low pensions. Deaths on the streets of Santiago has risen to 20. Attempt at a military “solution” will result in civil-war which the US cannot stage manage as it did in 1973 when Salvador Allende was overthrown to make way for the Pinochet dictatorship.

Barcelona is on fire with street battles between Catalans and the Spanish police. Not only Catalan separatists (just 50% of the region’s population) have joined in huge numbers, outraged by draconian prison terms handed down to Catalan political leaders who spearheaded an independence vote in the regional assembly of the “autonomous Catalan region” in the autumn of 2017. No compromise is in sight; harsh action from Madrid has made the crisis near insoluble for now.

More than 250 people were killed in September and October on the streets of Baghdad, Karbala and Basra during demonstrations which demand the resignation of the government and an end to rampant graft which is robbing the country of its huge oil wealth. The world’s third largest oil exporter sufferers from widespread poverty and an unemployment rate of around 15% while it is estimated that $400 billion of oil revenue has been stolen since the overthrow of Saddam in 2003. The country is rent by sectarian divisions and there is no hope of finding a stable government. If the authoritarian option didn’t work when US troops occupied the country will it work now?

The Bolivian challenge is of a different sort. President Evo Morales did a double-Mahinda by amending, some say fudging the constitution, to run for a fourth term. He is popular with workers, the indigenous people (he is one) and leftists; but he has undercut respectability by pushing through the constitutional amendment. The 20 October 2019 presidential election gave him 47% and runner-up Mesa 35.5%. A run-off is not required since either 50% or a 10% lead of over the runner-up avoids a run-off. But the margin is just 1.5% over the required 10% margin, prompting allegations of electoral fraud. Morales has challenged the opposition to a run-off which he will win. The US is getting into the act by withholding recognition of Morales.

Hong Kong differs from the others. Peaceful protest for legitimate rights quickly descended into mob violence, vandalism and recently looting. Beating Mainland people and all who disagrees is commonplace. There has been no intervention by Beijing and action by the HK government has been minimal. Use of force by the police has been to protect railways, banks, stores deemed pro-China by rioters, and to put out Molotov-cocktail generated fires. These events are a distinctly different genre from all the others (the psychology of mass hysteria and foreign incitement are explanations). There is nothing useful for a Lankan discourse from HK.

Variations on a theme; all have been thrown into uncertainty and governments challenged daily by rebellious clashes. The biggest gripes are corruption, politicians involved in drug dealing, inflation, low living standards, unemployment or a combination thereof.

Ethnic and religious sectarianism, what in a broad-brush sense I previously called “psychological-cultural-national-sectarian conflicts” compounded by international actors underlie what is happening. However, these two cases belong to a different genre from all the others and generalisations to a Sri Lankan context is meaningless.

Flabbergasting! A presidential phenomenon beyond comprehension! But is he an anomaly in the backdrop of a decline in decency in public life? He makes no secret of twisting public office for private gain, hoodwinking the taxman and indulging in shady deals. For just that his Base adores him ever more earnestly! America needs a reset in personal values and public spaces if it is to recover. A degeneration of liberal values is the other side of the coin of capitalism’s economic decline.

We can abstract are three causative themes from the dozen. A surfeit and simultaneously a deficit of Democracy. Second, inequality or unjust Capitalism. Third, Sectarianism, that is a surge of feral primitivism. First, huge demonstrations and uprisings are impossible without democratic space. In Saddam’s Iraq, Pinochet’s Chile, Franco’s Spain, or for that matter right now in Fattah el-Sissi’s Egypt and Modi’s Kashmir, mass demonstrations are invitations for blood and bullets. Democratic spaces have opened in the last two decades and cleared the way for public protest on a mass scale. At the same time democracy has fuelled a need for people to be ever more empowered and in every decision. This closes the space for government to function when unpopular economic decisions are needed or when concessions to minorities are justified.

These examples show cross-class revolt. The “new authoritarianism” demand in Lanka is intimately connected to Sinhala-Buddhist politics, not class politics. Opposition to authoritarianism is also cross-class. It is false that the “disenfranchised poor, the transient poor and the informal sector” are in Gota autocratic bag. The vector separating Gotacracy from the populist mass is chauvinism; DCP’s alternative theorisation is false. His “class analysis”, though methodologically interesting, is empirically invalid. As computer people say: “Don’t blame our alogarithm; garbage-in garbage-out”.

Second, ‘just capitalism’ is an oxymoron because economic equality subverts capitalism’s raison d’etre. This was well known long before Marx’s thundering indictments. Today finance capital, for reasons to do with its structure, expedites economic inequality at an exceptional rate. This is to do with asset price inflation, its nature as retainer or rent-seeking capitalism, debt inflation and the like that I have written about a few times – does anyone read the stuff? The point here is this: Growing democracy is incompatible with economic inequity, the trademark of finance capitalism. If you want a modern economy to grow on a capitalist basis you have to do what the IMF prescribes, no argument. But if you do what the IMF prescribes you will have a revolt on your hands! No deity, IMF or liberal-democrat has found a snake-oil to cure this fatal dichotomy. No autocrat nor Gotacract will.

My third fundamental driver of global unrest is sectarianism, a shorthand term which includes narrow nationalism, racism and faith driven extremism. So much has been written on this that I don’t need to expand on it today. There are also other factors, corruption, gross nepotism, family bandyism and politicians involved in drug peddling (mainly South and Central America), but all this can for the moment be subsumed under democracy deficits.