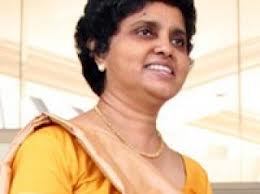 The lawyers of the Chief justice, Dr. Shirani Bandaranayake,  the firm of Messrs Neelakandan & Neelakandan, has written to the Editor of Island, Ceylon Today and  News Director of MTV/MBC, referring to publicity  given to allegations against the Chief Justice.

‘Our Client instructs us to state that she will, as always, continue to duly and properly discharges her duties without fear or favour; she will do so, independently, impartially and fearlessly in accordance with the Law’ the letter states.

‘At present, we bring the following facts regarding her bank accounts and remittances to your attention and through you, to the Public.

Our Client was appointed a Judge of the Supreme Court on 3oth October 1996. Since then no money whatsoever has been remitted to our Client from abroad or from this country save and except from her immediate family (inclusive of her sister) and her official remuneration.

Our Client’s sister and her husband, who are employed as professional engineers in Australia, reserved an apartment (for purchase by them) when they were in Sri Lanka. Thereafter from time to time, our Client’s sister (through her Australian bank) remitted sums of Australian dollars for the purchase of the Apartment. This was later converted to Sri Lankan Rupees by NDB. In Sri Lankan Rupees it was approximatelyRs.27 Million. Our Client, by cheques, directly remitted to the seller in installments asum of approximately Rs 27 Million. The Bank has confirmed these transactions

In the circumstances, in summary:

(a) our Client has declared all her operative bank accounts having assets in her declaration of assets and liabilities; and

the remuneration as a judge and the remittances from her immediate family.

Thus clearly there has been no financial impropriety on her part.

‘Our Client totally denies the other allegations and can easily refute them’ the letter states.
SLM