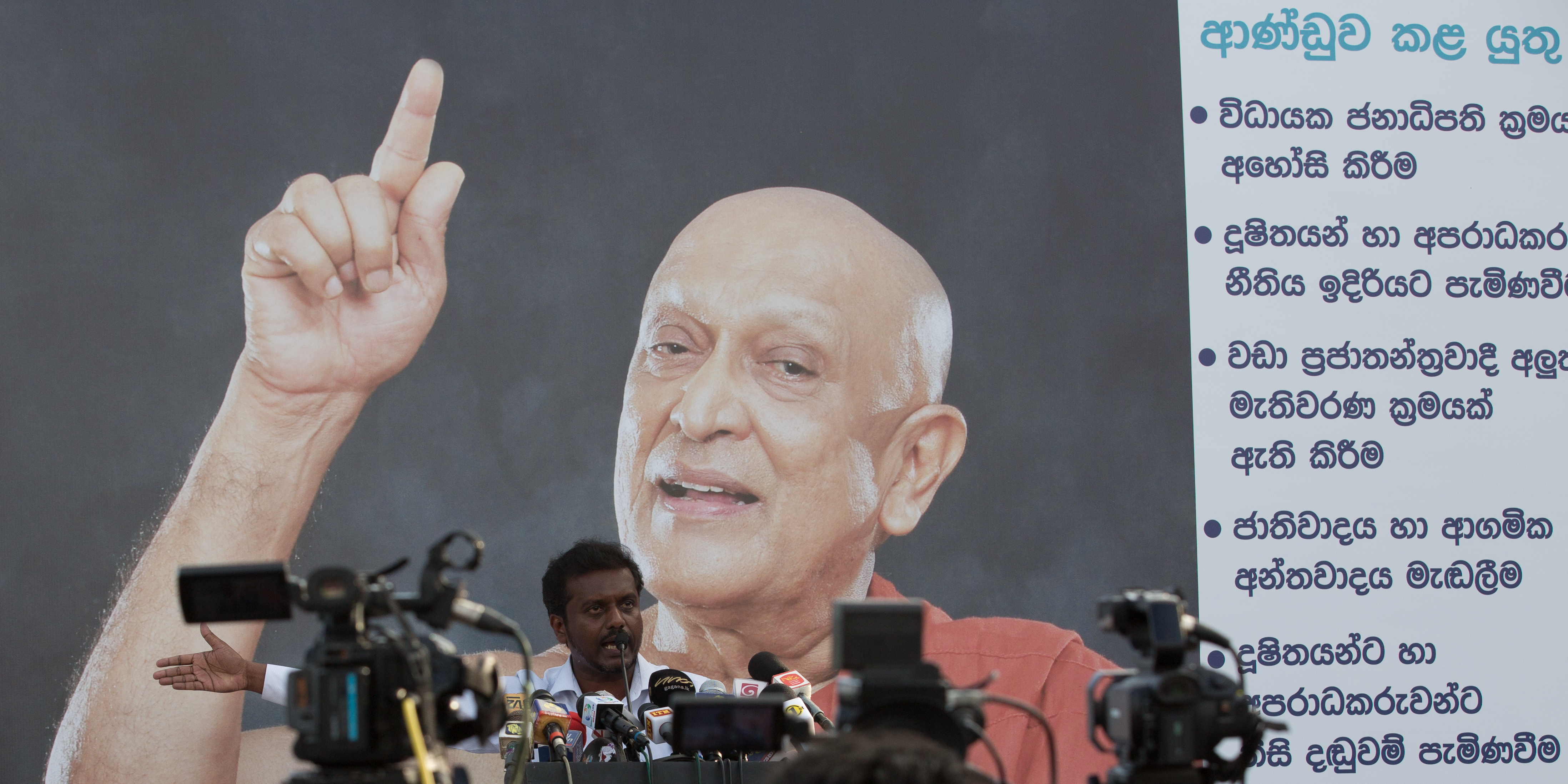 Image: Secretary of the Purawesi Balaya Saman Ratnapriya speaking at a public rally  to pressure the Govt to implement promises made. (c) s.deshapriya.

Civil groups which backed President Maithripala Sirisena at the Presidential election 2015 had decided to urge strongly President Sirisena and Prime Minister Ranil Wickremesinghe to continue with the joint government.

Secretary of the Purawesi Balaya Saman Ratnapriya told journalists at a news briefing held on 13th that they have decided to strongly urge both leaders to continue with the joint government. Purawesi Balaya is a civil group which backed President Sirisena at the last presidential election.

Civil groups members said they have already made the request from Prime Minister Wickremesinghe and will meet President Sirisena shortly to convey the same message.

He told a news conference that the President and the Prime Minister should make up their minds to work according to the mandate given to them in 2015 and underscored the fact that they would not leave any room for the Rajapaksa regime to return to power again.

Mr. Janaranjana said the mandate given to the President and the Prime Minister would not become null and void in the wake of the results of the Local Government elections.

“Today we are facing the repercussions of not carrying out the people’s mandate. This is like the race between the hare and the tortoise. As the government did not act on its mandate using the authority vested in it, a tortoise that was not in contention won the race. The rulers should keep this in mind,” he said.

Mr. Janaranjana said they met the President and the Prime Minister yesterday and pointed out that civil society and Purawesi groups still had the opportunity of discussing their issues with the two leaders.

The co-Convener of Puravasi Balaya, Gamini Viyangoda, who addressed  the news briefing , said that the results of the Election can be described as a red notice given to the current Government, which he charged had attempted to do something else, having overlooked the promises given when it was elected to office.

He further said that the blame for the defeat at the election should be placed squarely on the shoulders of both the President and the Prime Minister and that no matter what reasons they may give, those cannot justify the results faced by the Government at the Polls.

“The people are angry not with the thief, but with the people who have protected the thieves. That is a normal trend. When thieves during the Rajapaksa regime were brought before the law, the people saw how both the President and the Premier intervened in such incidents,” Viyangoda said.

He explained that the results of the election was not only an act of deception of the public by incumbent Parliamentarian Rajapaksa but it was also the result of the conduct of the Unity Government.

Viyangoda noted that it had much to do with not implementing the promises given at the Presidential Polls on 8 January 2015 such as doing away with the Executive Presidency and the failure to punish rogues in both the present and previous regime.

When queried as to whether the actions of the President and the Prime Minister to strengthen the hold on their political parties, instead of implementing the promises given by them at the last Presidential Election had contributed to this Election’s setback, Viyangoda stated that, “That is true. This Government did not get a mandate to solve the internal issues of their parties.

But, the Government having forgotten the mandate, did just that. The reason for this is because we have only politicians and not diplomats. Diplomats think about the future of the country, but as this country only has politicians they only thought of what will happen to their parties.”

(Excerpts from the reports appeared in Daily Mirror and the Island.)