CHOGM 2013: The war crimes can-of-worms was opened at an international conference is of significance 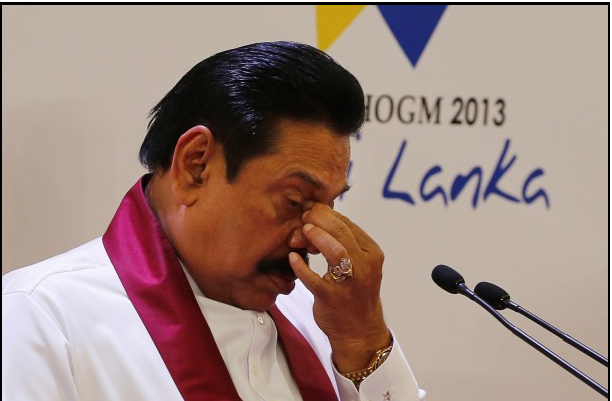 “Do not dictate to me, I’m not ready to take orders from others. We have a tradition and culture of over 2500 years and a time tested legal system together with a law enforcement process to address any issue”.

This was President Mahinda Rajapakses angry retort to British Prime Minister David Cameron’s threat in the CHOGM conference hall and at a news conference: “Let me be very clear, if an investigation is not completed by March, then I will use our position on the UN Human Rights Council to work with the UN Human Rights Commission and call for a full, credible and independent international inquiry.”

However, despite this bravado Rajapakse was actually sounding a retreat because he went on to say: “This is not something you can do overnight. You must respect our views without trying to push us into a corner, so please be fair.” He has conceded that an inquiry into the allegations is needed; he is only arguing about the timeframe. It seems that by holding CHOGM-2013 in Colombo, Lanka has shortened the road to The Hague, that is if Cameron is as good as his word and finds support in the UN-HRC. It will be difficult to back off when (not “if”) Rajapakse frustrates every independent inquiry, as he has done since 2009. But whether enough votes in UN-HRC will go along with Cameron is moot.

In the unlikely event that matters come to such a pass in March, one key player will be Delhi. Nothing can be said at this stage about what India will do since general elections are due at that time.  Whether Congress is re-elected or not, the uncertainty remains. A newly elected Congress administration, no longer constrained by Tamil Nadu sentiment, may return to gaming on Colombo’s side, as it has for the last five years – except recently. Though the BJP has been harsher on Colombo, in words at least, there is no knowing what it will do if elected to office. Hence, it is a fair to say that Delhi’s approach to this matter, after the elections, is a great unknown.

From victory to distemper

Up to the end of October many commentators, including this one, assessed CHOGM as a triumph for President Rajapakse since he had succeeded in getting a great majority of Commonwealth leaders to attend, and war crimes and human rights concerns seemed to have receded. It seemed he would pull off a PR coup and enhance his international standing. This is what I said in a newspaper article in late October: “So far CHOGM has been a triumph for President Rajapakse and there is no reason to suppose that there will be some sudden change of fortunes”.

This turned out to be sanguine; things began to unravel within a week and the outcome was different. I would not go so far as to say that CHOGM was a disaster, but it has been a public relations setback. It was assumed that if extremists created trouble they would be smashed, but Rajapakse failed to take command of the situation or to gain control of extremists who ran amok during the Conference. There were numerous mob incidents; I will name a few. Harassing BBC and Channel 4 news-teams by pro-government mobs led by Buddhist monks has been reported internationally; the government panicked and aired flagrantly incendiary TV programmes against foreigners; it threatened to lynch civil society personalities; it closed universities; it closed down NGO seminars. In sum, it was international public relations chaos.

One reason why President Mahinda failed to come off with flying colours is that Defence Secretary and brother Gotabahaya is the patron of Sinhala-Buddhist extremism. The mobs felt they could do as they pleased with impunity. They were not dispersed or dealt with firmly. Another reason is that Mahinda himself is chauvinist, to a degree, and it goes against his grain to discipline fanatic monks and racist trouble makers. Manmohan Singh has been lucky; by keeping away he has saved himself the embarrassment of being in Lanka while chauvinists baited conference delegates and attacked press and civil society gatherings running in parallel with CHOGM. The international media, particularly the BBC, gave publicity to these incidents. Energised chauvinism at home and bad global publicity turned CHOGM, which it was hoped would improve Rajapakse’s image, into a setback.

It was not all bad however; the President got the opportunity to advance a strong argument that by eradicating terrorism he had saved the most important human-right, “the right to life”. He also made his case that defeating the LTTE was essential for Lanka and insisted that wanton excesses had not been committed by his armed forces. This too was carried worldwide by the BBC in fair coverage. Much more significant however is that he has enhanced his popularity among Sinhala nationalists, and they are many, who loved his talking tough to Cameron and his refusal to be cowed by what they see as intimidation of white imperialists and old colonial master. Local television – one and all, de facto government mouthpieces – and panicky newspapers played up the nationalist fervour.

Importance of the IC

Turning to another aspect, a crucial argument that I have been pressing for some years has been decisively confirmed by the turn of events. This is the immense importance of the international community (IC). I would like to repeat the following remark from a previous essay:

“The power of the international community (IC) over local polity is far greater than analysts have been prone to grant. The IC must keep up relentless pressure till the Lankan regime is compelled to end human rights violations and stop trampling on judicial independence”.

The demonstrations and the hooliganism during the Conference proved conclusively how important the IC is in the eyes of all categories of local actors. Demonstrations in Jaffna during Cameron’s visit showed mothers begging the outside world to intervene. Their cry was that something be done about the hundreds, if not thousands, who have disappeared; that is abducted and probably killed by state security forces. This demand took precedence over economic and development matters. The cry of southern extremist mobs was precisely the polar opposite: “Don’t talk about war crimes and human rights; don’t accuse the military; don’t interfere in disappearances”. Sri Lanka washed its dirty linen in full view of the world. Mobs and supplicants alike know that international opinion is crucial; the regime is desperate to put its pariah status out of view.

China’s new (18 November) approach is refreshing. It has not raised human rights concerns explicitly, but the Chinese who are masters of gesture and innuendo, are well aware that the Foreign Minister’s statement will be read as signalling a shift. What interests me is whether this is a follow up of the Third Plenum of the CCP-CC held last week. If so it will have implications beyond Lanka in China’s stand on other foreign policy debates as well.

The Ides of March draws nearer

The atmosphere inside the hall was different from previous CHOGMs. Usually these are bland and boring gatherings where niceties are trotted out. The exercise is an opportunity for leaders and sycophants to enjoy First Class air travel and luxury accommodation at public expense. Not so this time; the atmosphere at times was acrimonious and rancid, harsh words were exchanged. When Cameron demanded an independent international war crimes probe and promised to take the matter up at the UNHRC if this is not done, government mouthpieces responded that he was playing UK politics in a Colombo conference hall to shore up Tamil votes for his party at UK elections. This very likely is true, but shining the spotlight on Lanka’s war crimes and human rights concerns at a leading international forum has had an electric effect, whatever Cameron’s motives.

I need to pause for a moment to debunk a logical fallacy. Its common form is this: When developing country leaders are accused of misconduct, instead of refuting the charges per se, the defence takes the position: “The Americans did such and such, the French this and that, the British, the Russians, etc, such crimes in the past”. This defence is pervasive in Lankan media and websites. It is flawed on two counts. First, it implicitly concedes the alleged crime. Second, that the British, the French and whoever else did such and such is no defence. Imagine a murder suspect pleading before a judge “Yes your honour, I did murder the victim. But Colonel Blimp of the Fusiliers murdered an innocent person in 1915 and was not convicted because he had influence. Therefore I too should be pardoned.” This fallacy, called a non sequitur, is widespread when war crimes and human rights violations are debated in Lanka.

Irrespective of Cameron’s, Canadian PM Harper’s, and the Madagascar PM’s motives, that the war crimes can-of-worms was opened at an international conference is of significance. Irrespective of colonialist and imperialist crimes, and they are many, if there is a prima face case that war crimes may have been committed in Sri Lanka, then an independent international investigation cannot be avoided. If eventually, and this may take quite a while, investigations against Lankan leaders, the military and the LTTE, are initiated it would be the most significant outcome of CHOGM-2013. I say this without prejudging the outcome of a probe. For the historical record and for posterity’s sake, though some not all LTTE leaders are dead, its alleged crimes must also be probed and responsibility assigned, albeit posthumously in some cases.