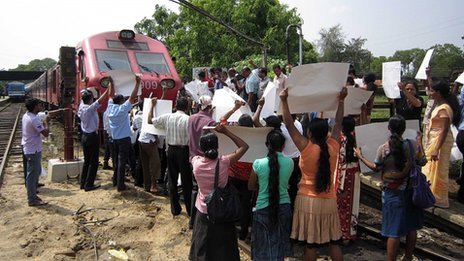 More than 100 Tamils whose family members disappeared during or after Sri Lanka’s civil war have been prevented from travelling to Colombo as the city hosts a Commonwealth summit.

The military stopped their buses from leaving the north en route to a human rights festival in the capital.
Separately a team from the UK’s Channel 4 TV has been prevented from visiting the former war zone in the north.

Their train was stopped from going there by pro-government protesters.
About 250 placard-carrying demonstrators blocked the train from leaving the town of Anuradhapura.

They accused the channel of supporting defeated Tamil Tiger rebels.

Callum Macrae, director of Channel 4’s award-winning documentary, “No Fire Zone: Sri Lanka Killing Fields”, said police told them they had to return to the capital.

“The mob are now blockading the train track [and] we cannot move,” Mr Macrae tweeted before being escorted by police back to Colombo.

His treatment was criticised by UK Foreign Secretary William Hague who is in Colombo for the summit.

”Dealing with the legacy of sexual violence, bringing those responsible to justice, and helping survivors to rebuild their lives with dignity is absolutely critical to reconciliation and long term stability” –William Hague British foreign secretary

Correspondents say that the government had hoped that the three-day summit – which begins on Friday – would showcase Sri Lanka’s post-war revival, but instead it is turning into a PR disaster, as some of the 53 Commonwealth members and rights groups focus attention on the island’s human rights record.

The final government offensive in 2009 to bring an end to a civil war that raged for more than 25 years has been dogged by war crimes allegations, with both sides accused of atrocities.

There has so far been no response from either the police or the military to the Tamil protest, but Media Minister Keheliya Rambukwella said the authorities had prevented them from travelling to Colombo because of potential disorder.

“There were intelligence reports that this is a politically motivated protest and [if] these [Tamil] people came to Colombo during the summit, it would have led to a breach of the peace,” Mr Rambukwella said.

The minister added that British Prime Minister David Cameron had not been invited to the summit to make demands of President Mahinda Rajapaksa.

He accused Mr Cameron of raising questions about alleged war crimes by government forces and a lack of freedom in Sri Lanka to secure the votes of Britain’s Tamil community and to stay in power.
Mr Hague told the BBC it was right to come to Sri Lanka and vital to raise “difficult questions” – and said the prime minister would be doing so. Mr Cameron is due to arrive from India on Thursday evening.

In a speech on Wednesday and in meetings with Sri Lankan officials including Mr Peiris, Mr Hague stressed the need for reconciliation in order to secure peace for the long term.

He said in his speech that “dealing with the legacy of sexual violence, bringing those responsible to justice, and helping the survivors to rebuild their lives with dignity” is “absolutely critical to reconciliation and long-term stability”.

“Since the end of the war in 2009 there has been progress which we welcome: Civilians have been re-settled, infrastructure re-built, land mines removed, provincial elections held in the north, and many former Tamil combatants reintegrated back into Sri Lankan society.”

But he said that to date, nobody has been held to account for crimes of sexual violence.