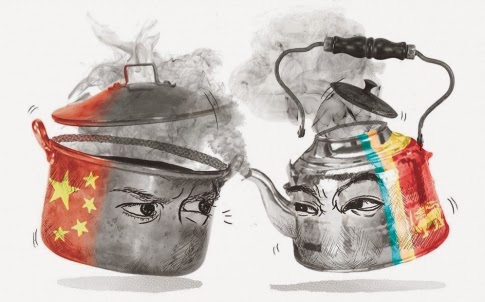 It is not often that the Chinese government criticises another nation for how it handles civil liberties, especially a country with which it has close financial and diplomatic ties. So it was curious when Qin Gang, a spokesman for the Chinese foreign ministry, advised Sri Lanka, a nation accused of committing war crimes, to “make efforts to protect and promote human rights”.

“What is most important is that human rights conditions should be improved by the governments of countries concerned,” he said, adding that “constructive help should also be offered by the international community”.

When China speaks out, things are indeed grim on the island nation. Much to Sri Lanka’s dismay, the nation’s human rights record became the unintended focus of the recent Commonwealth Heads of Government Meeting (Chogm) in Colombo, which critics considered an inappropriate location.
Several nations used the biennial summit to slam Colombo for failing to investigate alleged war crimes committed during the last stages of its 26-year-long civil war against the separatist Tamil Tigers.
Early on, Canada declined to attend. India and Mauritius followed suit. Britain’s Queen Elizabeth, head of the institution, did not attend, while Prime Minister David Cameron met with Tamil opposition leaders and victims of the conflict. At a press conference, Commonwealth Secretariat Commonwealth spokesman Richard Uku asked if any reporter had a question not related to Sri Lanka or human rights. None did.

In 2009, Sri Lanka’s government crushed the Liberation Tigers of Tamil Eelam at tremendous human cost. In the final months of the counterinsurgency, which the Rajapaksa government referred to as a “humanitarian operation”, shelling killed up to 40,000 civilians, according to the United Nations. Many people died in the army-designated “safe zone”, a narrow strip of beach, leaving a killing field of sand littered with children’s sandals and torn saris.

Since the war’s end, the international community has pressed Colombo to allow an independent investigation into allegations of war crimes and crimes against humanity. Instead, the government increased its troop numbers to more than 300,000 and granted the army virtual impunity for cases of sexual violence, torture, disappearance and land grabbing, abuses that continue to this day, according to human rights groups.

During the summit, Cameron told President Mahinda Rajapaksa that unless he saw “credible, transparent and independent investigations into alleged war crimes”, he would personally push for an independent inquiry into Sri Lanka’s human rights record at the United Nations Human Rights Council in March 2014.

President Rajapaksa and his family-laden cabinet – the body includes about a dozen family members – reject accusations that his government committed crimes and have tried to discredit critics. Following her visit to the country, UN Human Rights High Commissioner Navi Pillay was referred to as a “Tamil tigress in the UN” by one minister, while Cameron was accused for neo-colonialism by government supporters and warned by President Rajapaksa that “people in glass houses shouldn’t throw stones”.
While China is not a Commonwealth country, its presence was still felt: Beijing funded the new US$292 million highway that whisked delegates from the airport, and Beijing’s largesse to Sri Lanka has extended to the building of hotels, power plants and a 35,000-seat cricket stadium. In his closing speech at the summit, Rajapaksa thanked China for helping to defray the cost of post-war reconstruction with US$1.055 billion in loans and US$16 million in grants last year. China has funded several infrastructure projects, railways, highways, harbours, a coal-fired power plant and a new international airport, at an estimated cost of US$4 billion, according to Xinhua.

If anything could convince Colombo to take human rights seriously, it might well be the threat of falling out with Beijing. China is Colombo’s biggest giver of credit and aid, with a credit line that has become essential to the resurrection of Sri Lanka’s economy from the twin disasters of war and the 2004 tsunami. Despite Rajapaksa’s reputation for corruption and nepotism, Sri Lanka became a favoured investment destination for Chinese companies under Beijing’s “going out policy”, which encourages overseas investment.

The love story began before the war ended. With its own border regions inhabited by restive ethnic minorities, Beijing might have sympathised with Sri Lanka’s acts against the Tigers, but even then its friendship seemed mostly materialistic. Chinese arms sales have amounted to US$1.8 billion, and by 2007 several major infrastructure deals, such as Hambantota harbour, had been mapped out. In exchange, Beijing has afforded its diplomatic clout to Colombo, with China’s UN Security Council veto protecting Sri Lanka from intervention by the international community during the conflict.
Beijing’s fondness for regimes with less-than-perfect human rights records is nothing new. It has consorted with the leaders of the military regimes of Burma, Sudan and North Korea.

Nonetheless, the Chinese Foreign Ministry spokesman Qin Gang’s comment prompted some cautious optimism among human rights observers, most of whom had assumed China would continue to block any action by the UN’s human rights council.

“The fact that the Chinese government is mentioning the issue of human rights at all, and especially coming days after the commonwealth summit, is suggestive,” of the limits of Beijing’s tolerance, says Alan Keenan, senior analyst with the International Crisis Group.

Still, Keenan says the ambiguous summit statement is unlikely to signal a shift in Beijing’s support for Colombo. “It might nonetheless be intended to send a message to the Rajapaksas that absolute support from China can’t be guaranteed indefinitely and that they need to start improving their rights record to make it easier for China to defend them,” he adds.

For Beijing, too, the union seemed auspicious. Located only six nautical miles north of the east-west sea route, the world’s busiest, Sri Lanka has enormous potential as a transit point for shipments of oil and other resources from the Middle East and Africa to South East Asia.

Kerry Brown, director of the China Studies Centre at the University of Sydney, says that Sri Lanka’s strategic position, potential as a trade partner and an unwillingness to capitulate to international pressure on human rights, made it an obvious choice for China in its quest for reliable allies.

“Sri Lanka might well be the perfect client state,” says Brown. “With this list of attributes, it’s hard to see why both wouldn’t want to seek deeper ways to work with each other. What would always nag China is the feeling that its allies are only skin deep and that they are most likely disloyal.”

Having reached 6.8 per cent economic growth, Rajapaksa recently said he aimed to make Sri Lanka a middle-income country by 2016. For that to happen, Beijing’s continued assistance is likely essential. Last year, bilateral trade reached US$2.6 billion, and that is set to grow with a free-trade agreement in the works.

While both sides say China’s involvement in Sri Lanka is primarily commercial, both countries are known for the close relations between their business sectors and militaries. At a defence summit in Colombo in September, a Chinese military official reiterated Beijing’s commitment to transforming Sri Lanka. The event itself was co-sponsored by Poly Technologies, one of China’s largest arms dealers and the primary weapons supplier to the Sri Lankan army during the civil war.

A US$500 million port in Colombo recently opened; it’s 85 per cent-owned by China Merchant Holdings International, a state-owned enterprise. That is Beijing’s second port in the country, adding to a deep-water facility in the president’s hometown of Hambantota.

As Asia booms, more shipping facilities will be required, says Reverend W. Wimalaratana, an economics professor at Colombo University. Hong Kong and Singapore cannot meet the growing demand, and Sri Lanka can step in, but not without China’s know-how and money.

Rather than a new Singapore, however, critics have suggested that Sri Lanka might instead become a new Myanmar – a case of Beijing helping an authoritarian regime cement power in exchange for its resources.

Chinese companies’ global ventures have faced backlashes around the world, sparking protests in Burma and several African countries. Wang Dehua , a South Asian studies specialist at the Shanghai Institute for International Studies, paints a rosy picture of the China-Sri Lanka arrangement, saying it is beneficial for both parties.

“We really want to help the destination countries to prosper and become rich,” he says. “Together, we can build many more Singapores. And this would be beneficial not only for China, but the world as well.”

Wang says that Sri Lanka’s human rights record is no obstacle. On the contrary, China’s military and financial assistance has contributed to stability and development.

Meanwhile, Indian leaders fret about China’s activities in the Indian Ocean and involvement in Sri Lankan politics. They view China’s actions in Sri Lanka as attempts to establish a foothold in India’s backyard. Beijing has built ports in all the countries surrounding India, including Myanmar, Pakistan, Bangladesh and the Maldives.

In what could be an attempt to catch up with Beijing’s diplomacy, New Delhi recently signed a controversial deal to build a coal plant in Sampur and started test drilling for oil off Sri Lanka’s east coast.

Alex Neill, a senior researcher at Britain’s International Institute for Strategic Studies, says that despite Sri Lanka’s strategic value as a shipping transit point, Beijing has overriding priorities.
“I think the Chinese take a mercantilist approach, and they will be careful to not be accused of appeasement and amity of unpalatable regimes,” he says. “They just want to make money from this opportunity.”
———–

An earlier version of this story contained a paragraph with an inaccurate quote attributed to Colonel Xu Hui. The paragraph has been removed from the article. It also inaccurately stated that Sri Lanka is “confident of achieving 6.8 per cent economic growth.” The country has already reached that benchmark.