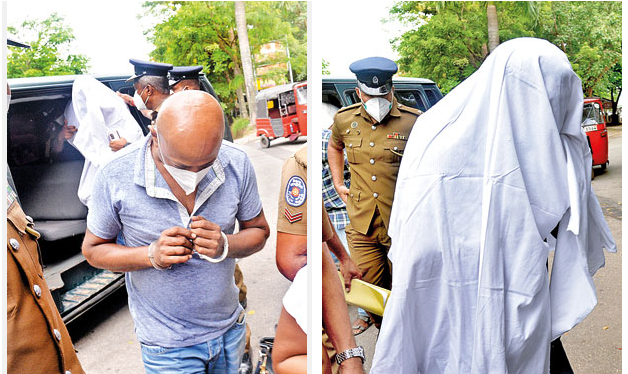 Image:Two of the suspects being brought to court. Pix by Romesh Danushka Silva.Sunday Times.

A 15-year-old child who was forced to perform sex acts in livestream feeds sold on social media is among many such victims of mushrooming cybersex crime, experts said after police arrested 26 people – including the girl’s mother – over the sickening offence.

The victim had been trafficked online for more than three months through special websites linked to a cyber shack in Mount Lavinia.

Five arrests on Friday followed 21 arrests earlier in the week.

Two of the suspects being brought to court. Pix by Romesh Danushka Silva

The girl’s mother, a leading businessman, a gem merchant, Mihintale Pradeshiya Sabawa Vice Chairman Lalith Edirisinghe, a skipper of a vessel and members of his crew, an IT technician and a three-wheeler driver are among those arrested. Sixteen of them have been charged with statutory rape.

Cybersex has become a lucrative business, with numerous young women trafficked for sex online. While some women voluntarily join the industry for the abundant cash offered, most are pushed into it due to absolute poverty or, sometimes, ignorance.

They are paid anything from Rs. 5,000-40,000 depending on how long they perform and the type of services offered, which range from sexually arousing video chats to live-cam shows where clients view and demand various sexual acts.

Victims are taken to cybersex dens fitted with web cams and live-streaming equipment and software and forced to pose and perform sexual acts on themselves and others.

Most often, they are raped by traffickers and their assistants in live videos that are watched by paying consumers.

Studies show that it is a billion-dollar illicit industry, its magnitude not known as technology to detect so-called “dark sites” is still being developed.

Communication with clients of such sites is through encrypted apps such as Whatsapp and email, with international online payment made through wire transfers and crypto-currencies that hide identity.

With no work, cinemas, teledramas or social interaction, people have turned to the internet for entertainment, and dark sites are mushrooming profusely, said Prof. Mahanama, who has carried out considerable research on the issue.

The victims are often led into the trade by their own family members. Some have been betrayed by their boyfriends who blackmail them by threatening to reveal compromising videoclips and nude photographs given to them by the victims in confidence.

“There are also instances of parents selling their kids and relatives forcing under age children into these pits.” Dr. Mahanama said.

Invariably, the victims are tightlipped out of fear of betraying those around them and the social stigma attached to the issue.

Speaking out makes them more vulnerable to other predators waiting to pounce on them.

Even the law enforcement authorities, supposedly the protectors of the public, can turn out to be vultures, as in a case on Tuesday when a mother who visited the Neluwa Police Station in the Galle District to report a rape assault on her underage child reportedly had to fight for the rescue of her daughter from the claws of police personnel who had made sexual overtures towards the child.

In another incident, also last week, a mother who went to the Warakapola Police Station to file a complaint of rape involving her underage child had to face the unsolicited advances of a police constable in the station.

Director, Grassroots Trust Mr. Billimoria believes the onus to help cybersex victims should be shared by society, which should empower women to speak up in such situations.

“They need appropriate training to handle such complaints,” he said.

He described instances where investigations of cybersex complaints had not been completed and perpetrators were still at large. Cases received are directed to the cybercrime division and the matter ends there, Mr. Billimoria said.

“It is a bottleneck. Rapid response is needed,” the Grassroots Trust director said.

He said although the Women and Children Bureau (W&CB) in the police force was enthusiastic in tackling complaints, its officers were hampered by a lack of resources

“We need a robust police mechanism that is sensitive to this issue,” he said.

Mr. Billimoria believes the onus to help cybersex victims should be shared by society, which should empower women to speak up in such situations.

He stressed the importance of educating schoolchildren on problems looming on the internet.

With children using online platforms every day for educational purposes, families should sit down and openly discuss how certain sites can lure them into the abyss.

“It is important that parents and teachers sit and openly talk, despite the embarrassment, on the topic,” Mr. Billimoria said, adding that the National Institute of Education should include sex education among school textbooks so that children learn about internet pitfalls, and that the Telecommunication Regulatory Commission (TRC) should post online programmes to educate the public on the safe use of the internet.

Sri Lanka has three sets of legislation to punish perpetrators of cybersex crime: the Computer Crimes Act of 2007, the 2016 Penal Code Amendment on Trafficking Women and Children and the Obscene Publication Act of 1983.

SLCERT (the Sri Lanka Computer Emergency Response Team), formed under the Computer Crimes Act, can provide only technical assistance for investigation. Spokesman Ravindra Meegasmulla said SLCERT had no powers to remove sites, and such orders should come from the police.

“It is a law enforcement job,” he said.

Women in Need, an organisation working closely with abused women, said it was important that stronger laws be enacted to regulate the internet. WIN works closely with the WCB on addressing crimes against women.

Lawyer Mariam Wadood of Women in Need, working with the Ministry of Youth Affairs and the Justice Ministry to bring in laws against cyber harassment, said the current focus on cyber piracy should be widened to address illicit cybersex.

“We cannot ignore the problem,” she said, urging more surveillance of the internet.

WCB Director, Senior Superintendent of Police Dharshini Ranasinghe, said cybersex websites must be identified and blocked or shut down.

She refuted claims that the sites cannot be identified or blocked.

SSP Ranasinghe said she plans to request the magistrates courts to grant permission to block such sites when the case on trafficking of the 15-year-old at Mount Lavinia comes up on Wednesday.

“We will request a court order to have such sites identified and blocked,” she said.