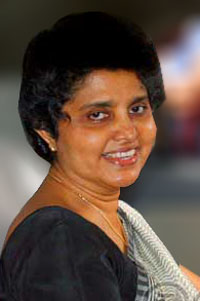 Press statement on behalf of the chief justice by the lawyers of the chief justice
The media has quoted the Government Members of the Parliamentary Select Committee as having stated that they have found the Chief Justice Dr. Shirani Bandaranayake guilty of the 1st, 4th and 5th allegations in the impeachment motion while exonerating her of the 2nd and 3rd allegations.

As soon as she is furnished with the same the Chief Justice will respond to the report of the Government Members and to the ex-parte evidence which was given in her absence, without any notice being given to her and which was given devoid of cross-examination. The Chief Justice re-iterates that if the said witnesses were cross-examined by her counsel, she would have been able to demonstrate the untruthfulness of the evidence of the key witnesses hurriedly summoned.

Yesterday’s observations made by Sri Lanka’s most eminent Judge and Jurist Dr. C.G. Weeramanthry, confirm the Chief Justice’s contention that she never received a fair or impartial hearing from the Government Members of the Select Committee.

The Government Members of the Parliamentary Select Committee have also stated that they will not even look in to the charges bearing numbers 6 to 14, although the Select Committee was mandated by the Speaker to look in to all charges including the said charges numbered 6 to 14.

The Chief Justice has at all times maintained that she is innocent of all charges which are baseless and framed purely with malicious intent. She has always stated that there is no evidence whatsoever in support of the charges framed against her. Her stance is now vindicated. It is hoped that suitable action would be taken against the aforesaid parties for framing charges against a sitting Chief Justice which could not even be maintained at an ex parte hearing.

She will as soon as the report of the Government Members of the Select Committee is made available respond to the findings, demonstrate that the findings are incorrect and she is innocent of the charges.