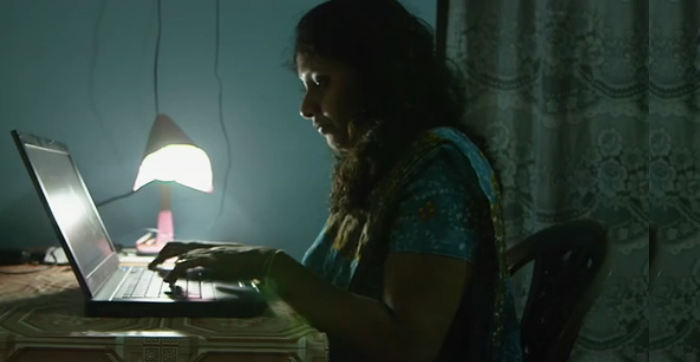 [Journalist Thadsa working on her story on abducted journalist]

A young reporter dares to cover press freedom in one of the world’s most dangerous places for journalists – Sri Lanka.
Despite the dangers involved in working for the Tamil newspaper Uthayan in Jaffna, young journalists like Thadsa still join their ranks.

Apart from the chief editor, Uthayan does not have a single news journalist over the age of 40. As they grow older, young journalists come under family pressure to find a safer job.

Thadsa is passionate about reporting and wants to cover a story on a journalist who disappeared in 2007, and look into the ongoing restrictions to press freedoms in Sri Lanka today.
See Video here
Filmmaker’s view:

I first covered the remarkable story of the Uthayan newspaper in 2010. I made a short film about the resilience of Jaffna residents and how they overcame the embargoes during the height of the war. For Uthayan , they had to overcome the scarcity of newsprint. Their ingenuity in the face of hardship and scarcity was awe-inspiring.

His work has appeared in The Guardian , The New Yorker , broadcast on the BBC and screened at international film festivals.

Kannan has developed award-winning documentary projects under different grants, including the Ford Foundation and the US State Department.

Kannan is also a qualified media and human rights lawyer.

I was born in Jaffna so for me its stories take on a particular significance. My family left for England in the 1979s before the war started. We were very lucky to leave. For decades, Jaffna residents were trapped between a repressive regime and an even more brutal insurgency.

The war ended in 2009 with the obliteration of the Tamil Tigers, but people’s freedoms are still under threat. Freedom of speech in particular is stifled and journalists face intimidation and the risk of being disappeared. This has been especially so for Tamil journalists in the north.

Uthayan has faced violence up close. In 2006, two workers were shot dead. More recently, in April 2013, Uthayan’s printing press was set ablaze. Today a policeman at the gate provides round-the-clock security but the threat of violence still looms large. Yet young reporters still join the ranks of Uthayan , undeterred by parental pressure to find a safer job.

Today Uthayan has just six news journalists and all of them are in their 20s, like Thadsa and Tharsan, the main characters in my film. They are supervised by the editor, Premananth, who navigates a fine line between encouraging his young reporters to find important political stories to write about, and at the same time making sure the parents do not worry too much about their safety to stop them from working there.

Like Prem, when working in Sri Lanka, I have also had to be strategic. Often it was better to tell stories from the past. In many ways, it was a form of self-censorship. If I am honest, I am not sure whether I could take the risks that the young journalists in my film face on a daily basis.

If the situation became precarious, I could always take a flight to my other home, the UK, but this is obviously not an option for your news reporter in the north.

Since returning to Sri Lanka, I often wondered what my life might have been like had my family not left. Would my life be so different from the journalists I met at Uthayan had my family stayed in Jaffna?