Channel-4 journalists sent back to Colombo; Not allowed to proceed to Jaffna 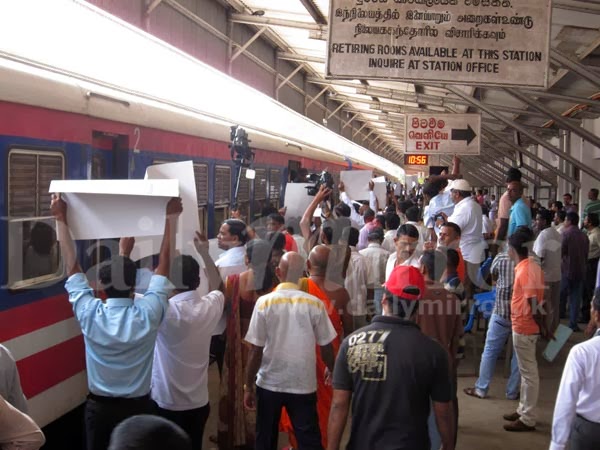 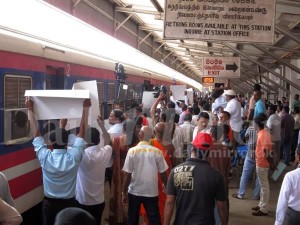 Channel -4 journalists including Callum Macrae, who were heading to the North were sent back to Colombo in a special vehicle by the police saying it was being done for security reasons after their train was blocked at Anuradhapura Railway Station by a group of protesters.
Meanwhile Media Minister Keheliya Rambukwella said the safety of the Channel 4 journalists was of paramount importance and that travel restrictions would be imposed taking into account their safety.

“The safety of the journalists is of paramount importance. Despite repeated calls to stop them from coming here, the government took a courageous decision and gave them the visas and therefore it is our duty to ensure their safety,” he said.

The minister said he was not aware of the ground situation in Anuradhapura and could not comment whether the train would be allowed to proceed to Vavuniya as scheduled.

“I don’t know what the ground situation is, but if there is any threat to their safety we will take necessary measures to bring them back and impose travel restrictions to ensure their safety,” he said. (Hafeel Farisz,Athula Bandara)
DM 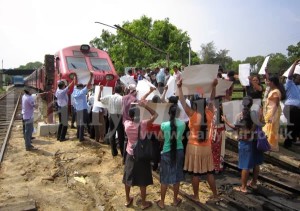 The Vavuniya bound train was blocked at Anuradhapura railway station by a group of protesters against Callum Macrae who is travelling in the train to the North.

CallumMacrae 410px 13 11 11Supporters of two political bigwigs and brothers in Anuradhapura have compelled Channel – 4 journalists including Callum Macrae to be sent back to Colombo.

The Channel 4 team were on a Vavuniya bound train which was blocked at Anuradhapura railway station by a group of protesters.

The protesters, even blocked the railway track, making it unable for the train to continue. The ‘Yaal Devi’ train, which arrived at the station afterwards too, was unable to move ahead, reports say.

The demonstration was also joined by several Buddhist monks affiliated to the government and the protesters were calling for Macrae to return to Colombo without visiting the Northern region.