Change can only begin with #GoHomeGota. We echo this demand – JUSTICE FOR ALL 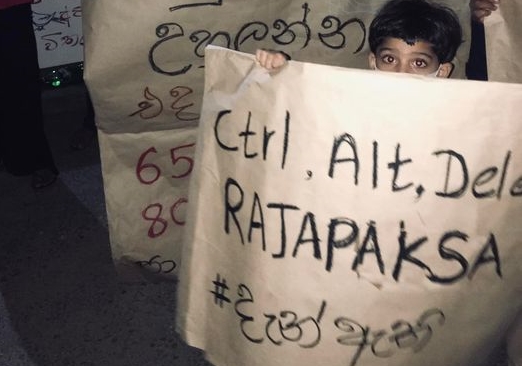 We condemn the reimposition of the State of Emergency from midnight on the 6th of May 2022, the very first instance it was available after revoking it on the 5th of April 2022. We vehemently condemn the violence unleashed on peaceful protestors on the 9th of May 2022 both at Minagogama and Gotagogama, credibly endorsed by the then prime minister and members of the government. The demands of the protestors at Gotagogama include an end to the culture of violence and impunity.

We denounce equally the counter-violence perpetrated on persons and properties. All perpetrators of violence should be brought to book forthwith. Violence is antithetical to what Gotagogama stood and stands for. By the committed and sustained peaceful conduct, the protestors at Gotagogama and all other sites of protest have earned the support, solidarity, and goodwill of the citizenry of the country and reflect Sri Lankans demanding in unison that the President goes home. Any attempt by elements with vested interests to discredit the peaceful protestors by attributing violence to them or any attempt to disrupt the peaceful protests using force or emergency should be desisted.

The attempts by the police to crack down on peaceful protests and intimidate protesters who are exercising their democratic right to dissent, shows the intention of the security establishment to create tension and violence. These attempts are more intense, induce greater fear and are effectively stifling of voices from the North and East of Sri Lanka. Excessive force by the authorities and the visible inaction to prevent harm to citizens in recent weeks has escalated violence, wreaked havoc and resulted in the death of one person in Rambukkana and injured several across other sites of protests. We note with extreme concern the attempts made to thwart the freedom of movement of citizens by the use of barricades, including those with spikes that can cause grievous injury, the use of curfew and emergency regulations. We decry these tactics of violence and intimidation against peaceful protesters and call out these acts as violations of the fundamental rights of the citizens in Sri Lanka.

We recognize that peaceful protests across Sri Lanka have called for a system change in the country. The general public has demonstrated widespread support for this change, and the citizens actively engaged in the ‘aragalaya’ continue to fearlessly and determinedly stand fast in their demands. They have been undeterred by complacency, coercion and criticism in peacefully pursuing their vision of forging a new Sri Lanka.

This political awakening is redefining the role of the citizen and the relationship between the citizen and the state with a clear message: change can only begin with #GoHomeGota. We echo this demand. The President must resign. This must be followed by other steps including constitutional, legal and economic reforms that are essential to address the growing humanitarian, economic and political crisis and ensure stability in Sri Lanka.

We also recognize in the protesters’ demands for a new Sri Lanka, the call for economic justice and strong social protections, especially for the working people of this country. We also highlight that the demands by women citizens at the protests reflect their multiple and continued struggles for justice in the political, economic and social spheres of life.

Further, we urge all Members of Parliament, in government and opposition, to listen to the demands of the Sri Lankan people for a genuine change in government and governance. They ignore this at their own peril, and that of the country. It is imperative that even now, all MPs take a principled stand that reflects the demands of the people to create political change in Sri Lanka. In this context we view the appointment of the new Prime Minister yesterday as an extension of the status quo ante and not the change of direction that the people yearn for.

We recognize that Sri Lanka is in a deep economic crisis and any way out of the crisis is daunting. At the same time, we urge the government and the policy-makers not to pass the burden of economic recovery on the poor, the workers, and the middle classes.  A sustainable and transparent policy package of social protection should be in place during the period of economic reconstruction in order to manage Sri Lanka’s unprecedented social crisis.

We affirm our solidarity with the people’s struggle for change and a new political culture, and commit to work towards realizing justice in Sri Lanka’s transformation.