Chances of the Thirteenth Amendment survival down to slim and none 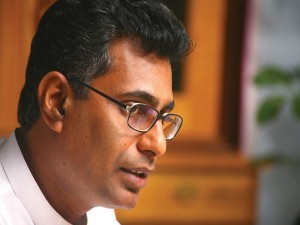 “We win justice quickest by rendering justice to the other party.” ~Mahatma Gandhi

The Thirteenth Amendment which saw passage in Parliament in August 1987 amidst civil chaos and political turmoil, once again has gained unusual attention from political quarters, both international and local. What is even more bewildering is, after accomplishing a military victory of unprecedented scale and crushing all hopes of a Tamil Ealam and after eliminating the last semblance of any militant resistance from the Northern Tamils, the very constitutional modification offered via the Thirteenth Amendment to the people of the North and the East, is now under threat. The victorious Sinhalese politicians led by the fringe elements of the Government Coalition and most unambiguously backed by the military establishment (which is close to the ruling elite) of the country, are now crying out loud to galvanize the hardcore Sinhalese Buddhists of the land towards the abolition of that Constitutional Amendment.

The campaign launched by the Jathika Hela Urumaya (JHU), led by their charismatic leader Champika Ranawaka to get the Thirteenth Amendment abrogated, firstly in Courts of Law and then in Parliament by means of another amendment to the Constitution is yet to receive any public support but surely the coming weeks would show the country if it is so concerned about a constitutional amendment now, especially in the wake of a formidable victory on the battlefield for the Sri Lankan Security Forces four years ago. Maverick Parliamentarian Wimal Weerawansa, the Minster of Housing too is placing all his bets along with the JHU, although this is not the first time that he is attempting to show the country that his brand of ‘patriotism’ is unique and without precedent. Both the leader of the JHU and Wimal Weerawansa are noteworthy comrades-in-arms of the defense establishment. Both of them enjoy a tremendous amount of support from all those pseudo-patriots who emerged after the ‘War-Victory’ and their collective appeal to the gullible and unsuspecting Sri Lankan village voter might hold more water than any liberal-minded pundit would assert.

Both Weerawansa and Ranawaka were placed first and third respectively in the Colombo district in the last General Elections held in 2010, which fact shows that both enjoy remarkable backing from

the Government voters. Weerawansa appeals to the déclassé while Ranawaka has in his pocket the Sinhalese Buddhist middle class that broke away from the United National Party in the wake of its failed attempt to implement the Cease Fire Agreement (CFA), which as a matter of fact signaled the death-knell to the UNP from the indigenous voting population in Sri Lanka. That middle class Sinhalese Buddhist voting bloc, unlike the typical Sinhalese voter whose sympathies generally lie with the United Peoples Freedom Alliance (UPFA), is a decisive segment in the population by their very nature of being, not only portrayed as, but in real fact, an influential factor of the country’s voting pattern.

UNP decline
That middle-class managed to convert thousands of UNP supporters to vote for Mahinda Rajapaksa in 2005 and unfortunately for the UNP, they chose to stay that way once the election was over. The revamped war effort engineered by the Rajapaksa regime further assured this class that they had made the right choice not only by the country, but also by the UNP. With the revelations regarding the back-channel activities connected to the signing of the Ceasefire Agreement came to light the UNP’s goose was cooked as far as the Sinhalese Buddhist vote was concerned. More than the war-victory that came about under the Rajapaksa rule, what cemented the departure of this particular Sinhalese Buddhist vote from the UNP was this Ceasefire Agreement.

All factors seem to have conspired against the United National Party and its leader. The CFA, war-victory, Ranil’s personal demeanor especially when he is found among the public, Mahinda Rajapaksa’s personal charisma, an increasing number of non-Buddhist politicians at the helm of the UNP, totally chaotic organizational structure spearheaded by an incompetent Party General Secretary, lack of grass-root support and lack of acceptable regional leaders have all contributed to the slow but sure decay of the United National Party as a nationally-recognized political heavyweight. The party structure that J R Jayewardene and R Premadasa built with the able and unstinted support of Gamini Dissanayake, Lalith Athulathmudali, Nissanka Wijeratne, Festus Perera, Ronnie de Mel, A C S Hameed, Cyril Mathew and numerous others took only one and half decades to fall flat on the ground. An overwhelmingly popular party that could boast about some stupendous economic and social achievements was reduced to a 35%-political entity, hardly recognized by the Sinhalese-Buddhist majority as their Party. 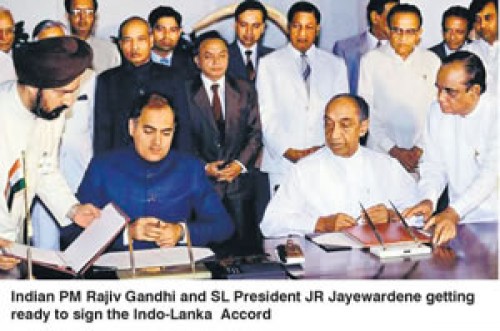 In this chaotic and messy background, the UNP began to further alienate the majority community both inside and outside Parliament. The Government propaganda machine went to work and the picture they painted about the UNP and its leader/s started assuming authenticity both in style and substance. The failure on the part of this mainstream Party contributed largely to the subjective conditions currently prevailing in the country.
The validity of the Thirteenth Amendment is being challenged only in these murky circumstances. When one sets these conditions in the context of numerous but significant other factors that influenced to create the prevalent dilemma about the Thirteenth Amendment, one sees that it is only logical and inevitable that the fringe elements of the Government is only striking because they have realized that the proverbial iron is still hot. In an attempt to eradicate any semblance of a chance of the UNP coming to power, they are in a crusade to ‘kill’ the UNP. As my barber told me the other day, the UNP has ‘expired’.

I have been reiterating over and over again that there is no one or two single factors that are responsible for the unfortunate situation this country is finding itself in today. But the near-demise of the UNP features right on top of all those reasons.

Mahawansa Mindset and Sinhala-Tamil Pacts
One other major contributor towards the present predicament about the Thirteenth Amendment is the Mahawansa mindset that the large majority of our people are trapped in. Consequent upon the war-victory, this mindset has found even more fertile ground for further nourishment and propagation. From our small days, from the time we learnt to read and write in our schools, we have been indoctrinated in the wonders of our kings and ministers. All our historical heroes are the Dutugemunus, Walagmbahus and Vijayabahus. It is not different from other nations’ histories. Each nation takes it upon itself to brainwash (they call it education) the younger generations on their war victories and that practice cannot be helped in the context of building love for Motherland and patriotism.
Yet when gross exaggerations are added to the list of passionately distorted realities, the listener or the student gets totally caught up in the ‘angelic’ view of his or her nation. When this kind of ‘education’ is driven down by an equally passionate teacher, the resultant effect is doubled or trebled and we end up in believing our own embellishments and falsehoods. This happened then and it is happening now. The best example in Sri Lanka’s context is when the brutal war waged against the Northern Liberation Tigers of Tamil Ealam (LTTE) was called a ‘humanitarian operation’. Such angelic phrases were created by the Goebbels, Stalins and Maos and the likes when they were engaged in campaigns of brutal suppression of ordinary people while they had nothing whatsoever to do with the allegations that were hurled at them. The present Sri Lankan Government has got caught in this trap- a creation of their own- and that is why they find it exceedingly hard to explain themselves to the International community in the various fora such as the United Nations Human Rights Commission (UNHRC) and other agencies.

Every agreement followed by violence
If one notices the process of Sri Lanka’s recent history, especially after it gained Independence in 1948, each and every occasion when the Sinhalese leaders came to an agreement with those of the Tamils, violence followed even before such agreement or pact could be implemented, each successive time larger in scale than the previous one. In 1958 when the Bandaranaike-

Chelvanayagam Pact was signed between the two leaders, Bandaranaike was pressurized to abrogate the Pact by the Sinhalese Buddhist leaders led by Venerable Baddegama Wimalawansa, L H Mettananda and F R Jayasuriya. In 1968, the Dudley-Chelvanayagam Pact too met with the same fate. In fact, the violence that followed claimed the life of a Buddhist Monk opposite the American Embassy. On both these occasions the two Prime Ministers, S W R D Bandaranaike and Dudley Senanayake, both quintessential liberals, did not have the ‘stomach’ to go through the whole process and both Pacts were withdrawn even before they were enacted.

In 1987 all hell broke loose when J R Jayewardene signed the Indo-Lanka accord with Indian Prime Minister Rajiv Gandhi and the entire country broke up in flames. Even J R’s own Prime Minister Premadasa and National Security Minister Athulathmudali were openly against the “Accord” and what ensued gave rise to a spate of violence unleashed by the Janatha Vimukti Peramuna led by Rohana Wijeweera and his gang. On all those occasions what stood out was the fact that the Sinhalese Buddhists led by Buddhist Monks ran amok on the streets of Sri Lanka and attacked Tamil civilians who had nothing whatsoever to do with either the contents or the process of the “Accords” that were signed. The inner rage that the ordinary Sinhalese Buddhists unleashed on these innocent civilians stands today as a shameful act of murder and larceny. No Sinhalese leader had the guts to openly declare that it was wrong.

In such a context the Thirteenth Amendment’s survival seems unlikely, unless the President shows real desire to do justice, disregarding the tremendous pressure that is being built around him. So far he has not shown any wish to go in that direction. He is himself engrossed in the very orgy of triumphalism and self-glorification. The sense of self-righteousness that has captivated the entire Government ranks is being treated as carte blanch to engage in anything, from corruption to nepotism to condoning mayhem from his own disciples. The external pressure that is being brought about by the United States and Indian governments and the Tamil Diaspora might prevail at the end. And that seems to be the only ‘slim’ chance that the Thirteenth Amendment would survive and if not, the chances are none.