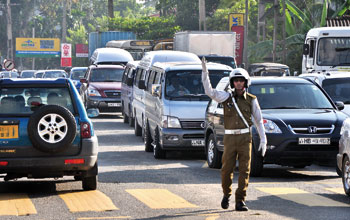 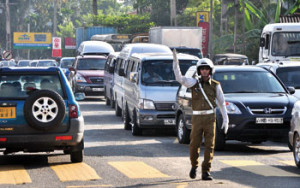 Kusal Perera
Short note on above with emphasis on how gradual “centralisation” of power in the hands of the Colombo governments, left poverty alleviation along with accrued wealth in and around Colombo a continuing debate and opens a dialogue on why power has to be devolved for provinces to address their own issues related to poverty and development, with democracy enhanced and enriched. 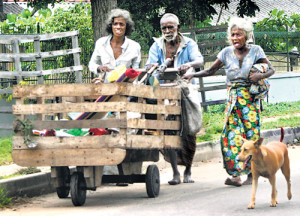 Poverty is often discussed in terms of numbers –
number where the poverty line is drawn
growth or not on % of poor people
family income of average urban/rural household
what the per capita income is
etc., etc.,
This is Very Misleading !!! Numbers don’t give the actual picture, nor does it explain the story of poverty
Take per capita numbers – This is how development is projected
US $ 2,399 in 2012 to US $ 4,400 in 2015. The country would also develop fast and would have a growth rate of around 9% during the period – Dr. T. Lalitha Gunaruwan, Senior Lecturer (Economics), University of Colombo
IF, a person earns LKR 299,875 [@ LKR 125 / US $] per annum in Sri Lanka, then it is LKR 24, 989 per month ! Sri Lankans can not be poor !!!
But this is how people earn !
Monthly starting salary of a Graduate Teacher –
According to Public Administration Circular No: 6/2006 (iv) dated 24-08-2007 is
Rs. 14,135 – 180×9 – 240×6 – 330×5- 400×7- 645×13 – Rs.30,030 and ADD LKR 5,850 as CoL allowance (calculated 05 years ago) = LKR 19,985
Monthly salary of a EPZ female worker –
LKR 6,790 + LKR 1,000 (Budgetary allowance since 2002) = LKR 7,790
With 03 hrs overtime 05 days of the week, 05 hrs overtime on Saturday, working without taking any leave to earn “holiday allowance” of LKR 1,000 their take home pay LKR 13,000 or less [Prof Athula Ranasinghe – Research on Apparel sector Living Wage / 2012 August]
Distribution/share of GDP in 2009 @ market prices
GDP             Rs.Mn             Per Capita GDP (Rs)
Western Province –    45.1%           2.2                    374,591
Central Province –      9.6%            0.46                          174,988
North Central –          4.8%            0.23                   189,138
Uva Province –          4.6%            0.22                   168,079
Sabaragamuwa –        6.3%            0.30                   157,497
That remains the basic picture, 64 YEARS after independence
POVERTY is being talked of in the Donoughmore Commission Reporttabled in British parliament in 1928 and to quote ;
“The Commission found that in many provinces, poverty and ill health were the lot of many villages. Many sections of the people had not even decent housing or adequate facilities for primary education. No poor law system for relieving destitution, no system of compensation for injured workmen, no up to date system of factory legislation and no control over hours and wages in sweated trades.”
There is also mention that poverty is rampant in the dry zone areas.
Also, the granting of universal franchise by the Donoughmore Commission was not only on the basis of the submission made by trade unionist A.E. Gunasinghe, but also on the assumption, that better provincial representation in governance, would help poverty alleviation.
Since then, there were different measures adopted to relieve poverty under colonial rule.
Talking of independent Ceylon and Sri Lanka – Major efforts taken during 64 years of independence;
Major development programmes leaving out colonisation schemes like Gal-oya, Rajanganaya and Uda walave
The list should also include;
1978 onwards – 19 Integrated Rural Development Programmes (IRDPs) outside North and East and all were foreign funded, designed under the Ministry of Planning and all implemented through GAs (District Secretaries).
Add – money spent in districts under the Decentralised Budgets; each of the 225 MPs given 35 Mn every year till 2002 and since then 50 Mn every year.
Take Anuradhapura district – 09 MPs x 50 Mn x 10 years = 4,500 Mn
With ALL those “efforts” – Where is development ? Where is poverty alleviation ?
This is why it is IMPORTANT to see, what type of governments we have had under 03 Constitutions beginning 1947.
1947 to 1972 – Soulbury Constitution
No reasonable impact on poverty alleviation – World Bank and IMF walks in to advice
Instead of poverty alleviation and development, we paved the way for the ethnic conflict –
1972 to 1978 – Republican Constitution
No impact on poverty alleviation – More World Bank and IMF advice and growing foreign debt.
AND, there was heavy Centralisation of power
1978 to date – The Executive Presidential system
NO impact on poverty alleviation – growing national debt, devalued Rupee
and for the first time – exclusive State programme for poverty alleviation as Janasaviya Trust Fund, turned to Samurdhi.
Poverty still remains and development is yet to come to ordinary people.
BUT ultimate in Centralised power in Colombo, for politicians.
Bottom line –
Increased CENTRALISATION through 3 Constitutions (both parliamentary and the Executive Presidency) has led to NO POVERTY ALLEVIATION to date.
But has led to a serious disparity of income and distribution of wealth in society.
Disparity in income and wealth distribution has been in favour of Colombo and suburbs.
Therefore a better option is – MORE POWER TO PROVINCES in real terms.
The LLRC has dealt at length on why power should be effectively devolved to the peripheries
while stressing “…..it is also imperative that the lessons learnt from the shortcomings in the functioning of the Provincial Councils system be taken into account, in devising an appropriate system of devolution that addresses the needs of the people…..”
“All parties should recognize that the real issue of sharing power and participating in
Government is the empowerment of the people and making the political leaders
accountable to the people. This applies to Sri Lanka as a whole and includes the needs of
citizens of all communities, Sinhala, Tamil, Muslim and others. The effective functioning
of the democratic system which fulfils these needs, together with a consensual
framework of devolution will, by virtue of attributes and institutions intrinsic to it, also
provide the answer to the grievances of minorities.” [LLRC Recommendations – 8.222 ]
Post script ;
Lets also accept, the oft repeated phrase and the popular conception that “PCs are white elephants” is wrong and used without any proof. Here’s the cost of PCs ;
Expenditures by Subject Categories
Provincial Establishment
(Additional layer of provincial institutions such as the Council,
the Governor, Chief Minister and Ministers and Ministry staff) – 02.78%
Provincial Administration
(New administrative layer of the Chief Secretary and provincial
budgeting, planning, revenue, administration) – 01.11%
Economic Infrastructure
(Roads mainly) – 02.06%
Social Infrastructure
(Health, ayurveda, education, child care and social services) – 83.05%
Community Services
(Local government, cooperatives, rural development etc.) – 08.51%
Agriculture
(Crop sector, livestock, fisheries, lands) – 01.68%
Industries
(Small industries, textile – handloom and entrepreneurship) – 00.82%
Costs of Provincial Services by Nature of Expenditure
Political Establishment – 02.3%
Provincial Administration – 01.4%
Service Delivery – 96.3%
(Figures are for 2004, Source: Annual Report of the Finance Commission)
[Prepared for a presentation at CEPA]
Kusal Perera – Journalist / Political Columnist
Share
Facebook
Twitter
WhatsApp
Pinterest
Email