Censorship is the enemy, not Shakthika 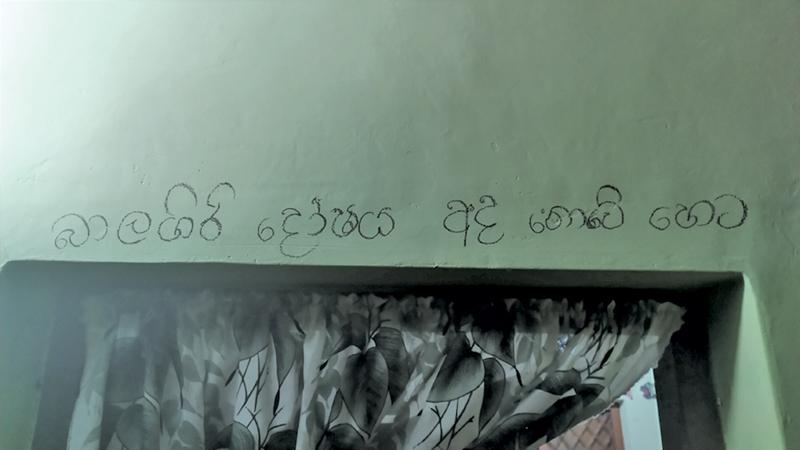 After visiting Shakthika Sathkumara in prison, I sat down to write about this writer who should never have spent a single day behind bars, let alone four months, for a short story he wrote. Then I reconsidered. Self-censorship — that is the real enemy of freedom of expression and that is what governments and other institutions harbour secretly.

Providing an alternative view of religious leaders and their lives in a work of literature is poetic licence. If you disagree, well, it’s just what all art is about. You are meant to explore, challenge — or disagree. Different people react to and reflect on art in different ways, the way you react to the frescoes in Sigiriya. Read ‘Ardha’, Shakthika’s short story, and decide whether it’s a good short story or not. Or whether its message is valid or one you reject. But question when a writer who has not advocated any violence, let alone indulged in it, is arrested for writing a story. Shakthika is not the first author in Sri Lanka to write a story providing a different view on Siddhartha, Buddha before he attained nirvana, and his wife Yashodhara. But he could well be the last, if we continue to accept his incarceration and support the censorship imposed by the State and religious institutions.

When the renowned author Martin Wickramasinghe published ‘Bava Tharanaya’ in 1973, many people were critical of it on the grounds that it did not meet the high standards they expected of him. But he was never subjected to state censure. There is an element of privilege that we have overlooked. Has Shakthika been targeted because it was easier to unleash the repressive force of the state on a lesser known writer from a modest background?

Martin Wickramasinghe’s case is worth reflecting on. Though his book was criticised widely, it continued to be printed and people continue to buy it. The Penal Code of Sri Lanka was in existence four decades ago when ‘Bava Tharanya’ was published. The International Covenant on Civil and Political Rights Act (ICCPR) under the provisions of which Shakthika is being prosecuted, was legislated in Sri Lanka only in 2007. Meeting Shakthika in prison was an informative experience for me. He was behind three layers of iron nets. I could only see the faint outlines of his smile and his hand waving. He unwaveringly explained his side of the story. He had a list of issues to be raised, such as how the police was involved in mobilising people to protest against him. Visiting Shakthika’s wife Yanusha and their children in their house later was humbling. All the walls of Shakthika’s house are decorated by drawings by his two children, aged four and one and a half. By looking at where the drawings were on the wall, you could tell how tall they were. We learn to express ourselves from a young age, and I looked on with envy how freely the children were able to do so, without the slightest inhibition.

Amnesty International declared Shakthika Sathkumara a Prisoner of Conscience because all he did was express his peaceful opinions. Because his imprisonment is wrong. Because Shakthika is being made an example of. He is being punished for expressing his view, so that the wider community of writers and the public in general, know where to draw the line when expressing their views. Or have those lines drawn for them. His ordeal reminded me of how other prisoners of conscience of Amnesty International like the journalists Lasantha Wickrematunga and J.S. Tissanayagam, faced persecution and were made examples of with the fear of those tragedies continuing to reverberate.

Shakhtika’s case has raised concerns about the law being misused. And with good reason too. It is shocking that a law that is supposed to reflect a country’s commitment to the ICCPR, which protects the right to freedom of expression, has been used to punish the author of a fictional short story. Art. 19 (2) of the ICCPR says that “Everyone shall have the right to freedom of expression” and that “this right shall include freedom to seek, receive and impart information and ideas of all kinds, regardless of frontiers, either orally, in writing or in print, or through any other media” of a person’s choice. Of course, that specific Article is not included in the ICCPR Act of Sri Lanka which has been used to cuff Shakthika under Section 3 (a) which criminalises propagating or advocating religious or racial hatred. But is that what Shakthika did in his story?

The ICCPR Act of Sri Lanka might not state the right to freedom of expression, but it is guaranteed in Art. 14 (a) (1) of the Sri Lankan constitution which carries with it a set of obligatory duties and responsibilities. You cannot, for instance, incite violence. But Shakhtika did no such thing. He wasn’t even writing a biographical account — just a piece of fiction about same-sex sexual relationships among Buddhist monks, and the relationship between Siddhartha and Yashodhara. It is ironic that the same people who lodged a complaint against this little known short story, that apparently offended them, managed to publicise it so widely. And those same people see themselves as the defenders of Buddhism, a religion whose followers so often portray it as being fundamentally about tolerance.

Shakthika’s case will come up for hearing tomorrow in the Kurunegala High Court. It will be his first chance of getting bail and going home to his wife and children. Shakthika deserves to go home free. And Sri Lanka deserves a better justice delivery system that should not be misused to put someone in prison for exercising their freedom of expression! I find myself unable to revel in my freedom in the same way that Shakhtika’s children did in theirs, expressing themselves freely and without fear. I yearn for a time when every citizen of Sri Lanka can express themselves freely, without fear or favour.