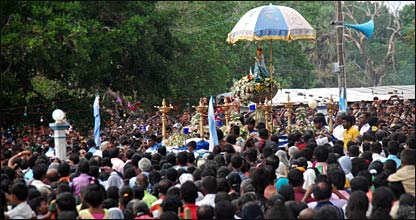 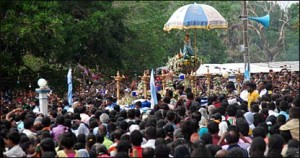 The leader of the Catholic church in Sri Lanka has warned that the country risks being isolated in the face of international criticism. In his sermon to hundreds of thousands of Catholics on their annual pilgrimage to Madhu church, Mannar, Cardinal Malcolm Ranjith called upon the authorities to come up with a “learned response” to international pressure on the island.
photo: Nearly 200,000 devotees have gathered to Madhu church for the final day of the seven-day feast

“If we are to reject everything, we as a small island can be completely isolated,” he told the congregation.

Sri Lanka is under increasing international pressure to conduct an independent investigation into allegations that the security forces and the LTTE committed gross human rights violations at the last stages of the war.

The government reject the allegations.

The Cardinal also calls for the implementation of political rights of Tamils and the Muslims in the island nation.

Although the war with weapons is over, a war against “national selfishness” need to be launched, said Cardinal Ranjith.

“It is more difficult than the war that is over. As Sinhalese, we need to think about the political rights of the Tamil and Muslim people in the north and the east,” he told the pilgrims who came from all over the country.

Nearly two hundred thousand devotees have been gathered to Madu at the end of seven-day annual feast.

“We need to come out of the fear that the minority is always a threat to the majority,” the Cardinal added.

The most senior catholic clergy described Sri Lanka as a country “united by law, but divided by heart,” and emphasised out the importance of Sinhalese working to win the Tamil people living in the north and east.

“If not, another bloodshed in this country it could be unavoidable.”

The shrine sacred to Catholics was in LTTE-held territory until advancing Sri Lanka troops captured the area in April, 2008.