Capitalism, Austerity and Revolution: Why We Took Part In the Million Mask March 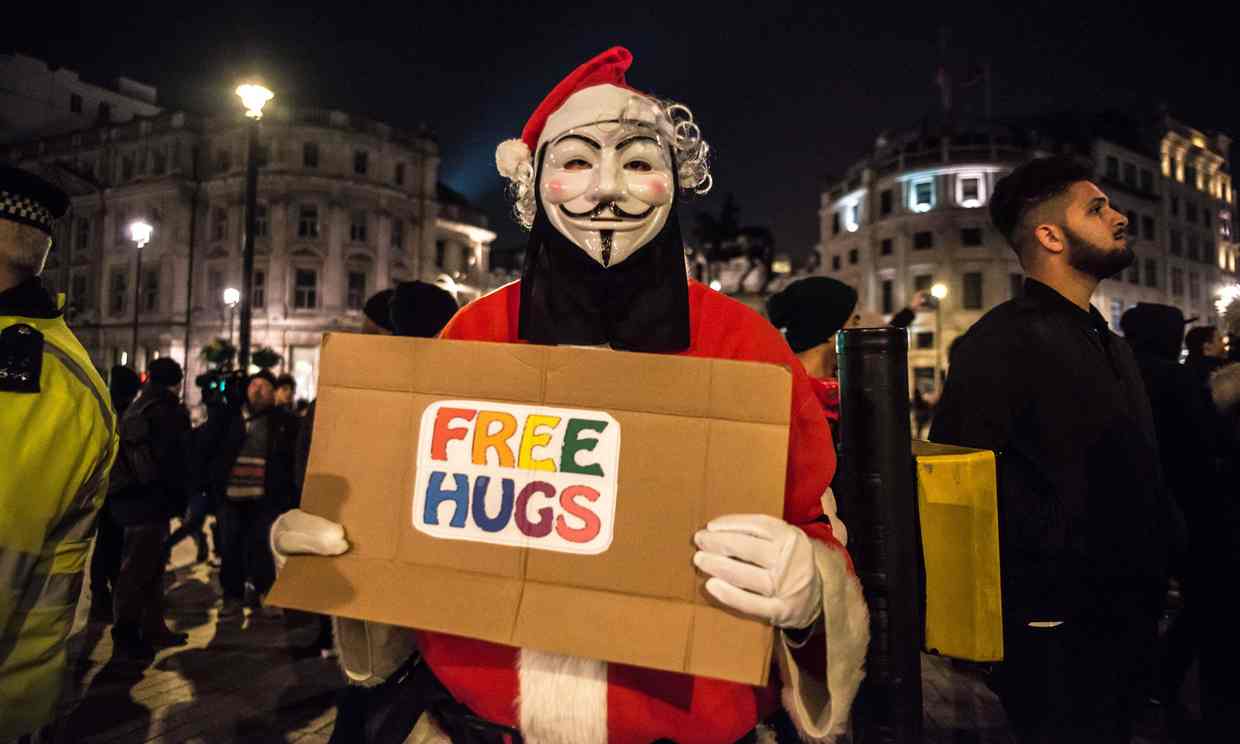 Masked anti-capitalism and pro-civil liberties protesters descended on central London on Saturday, Guy Fawkes night, to march near the Houses of Parliament.

Despite an increased police presence and stricter rules on protest boundaries, the march was largely peaceful, though by 10.45pm there had been 47 arrests, the majority for drug offences and obstruction.

We asked attendees why they took part in the demonstration. Here’s what they said:

‘I am protesting against the rise in xenophobia’

I feel really strongly about the situation in our country and feel that I need to do something. I’ve never taken part before but I am protesting against the recent rise in xenophobia in our country and the government’s lack of initiative to do anything about it. Being English, I am ashamed of our collective behaviour over the past few months since the Brexit vote. I voted leave but I did not anticipate the wave of racism that followed, and I am deeply disturbed and embarrassed by what Britain now stands for and how the rest of the world views us.

‘The 99% are getting stronger and more people are waking up’

People are beginning to stand up against the bullying, exploitation and oppression by the people at the top, the global elite, who are wealthy beyond anything we could imagine. I have been to most of the marches and do so because I support Anonymous and the Occupy movement.

People have been bought by money for centuries, and ordinary people will go along with it because of the carrot being dangled. Money is a huge illusion: money is debt; we have been enslaved by money. Now they want to control us completely in this New World Order scenario. We, the people, say no. Enough is enough. We are turning back to caring for each other and for the planet.

The 99% are getting stronger, more people are waking up, and it is really important at this point in human history that we stand up to the tyranny of the corrupt governments that back the corporations that are destroying the planet.

I have always spoken to the police and had interesting discussions with them. Many protesters feel negative stories about violence are set ups by the police, and I would tend to agree with that. The police are there to do their jobs, which pay their rent and mortgages. They are just like us, and many feel sympathy with the cause. Hopefully one day soon they will take off their helmets and join us.

I have been to all but one of these protests. It is great to be with other people who feel as passionately about corruption and want to see big changes. It’s always interesting – meeting lovely people, having fun – but also feeling that we need to be doing this. It’s drop in the ocean but this movement is not going to go away. If we can get more people to wake up to what is going on, then fantastic.

I have always believed in standing up to oppression and tyranny. It is our duty to do so. We have been fed so many lies – and the media is mostly propaganda to maintain people as units of production and consumption.

V for Vendetta provides the image of the Guy Fawkes mask, but it feels as though our future could be like that if they think they can get away with it. Orwell’s 1984 warned us about it but with the Brave New World aspects of society.

Watching the NHS crumble, and watching the older generation – even my parents – be tricked into voting for ridiculous rightwing parties, convinced that these people will improve the country.

I’m sick of racism towards people who are simply moving from one place to another, often to escape war, that our leaders have and will for ever perpetuate, as long as there is money to be made from arms and oil. The ignorance of a large portion of a nation, because of a corrupt media and unelected bunch of leaders.

Do you think the civil rights movements in the US in the 60s and 70s were allowed? No, they don’t want us to protest, not just because of the potential violence but to block our freedoms and rights. The police try this every year, and with about 0.5% of the people there acting in a violent way, they feel it’s justified. Last year no one in the main march had any idea of this police car being blown up. The march went nowhere near Scotland Yard. Funny that there was a whole group of news reporters stood conveniently near the vehicle when it happened, yet I probably saw about one reporter near the march for the whole evening. Something fishy was going on there.

It’s exhilarating – until you see someone throw a firework at a police horse. But that was just one guy, clearly an idiot, and he deserved to be arrested. I’ve spoken to a number of police each year and some have expressed sympathy as many have had their own pensions and benefits cut. However, the majority of them are arrogant and see themselves as better. They view us as a bunch of criminals, though we are also protesting for their sake.

I’ve offered officers Mini Cheddars because they looked hungry. Most have turned up their noses at them but the odd one or two were really grateful. I also witnessed many people being arrested for not moving behind a certain line the police had made up. The officers were trying to scare everyone off by pretending to arrest this guy but all they got was abuse from the crowds.

I’m annoyed at the current status quo of our elected representatives riding roughshod over the needs of the people who pay their taxes and keep the wheels turning. Decisions are made by faceless individuals in Whitehall and elsewhere. We are being deceived and manipulated into believing austerity is in our best interest yet public services are being decimated.

These protests represent a group of like-minded individuals coming together to demonstrate their frustration and unhappiness at a system that is rigged in favour of an elite of unelected cabals who have undue influence over the lives of working people. It’s theatre, with an undercurrent of violence aimed at the property of big companies and police dressed in riot gear.

I try to attend as much as I can. I protested outside parliament on the eve of the Syria bombing. It didn’t change a thing. I went along to the anti-dolphins slaughter demo last year, that was fun. Didn’t change a thing either. I used to go to the May Day protests but now don’t as they inevitably end up in a kettle. But they didn’t change a thing. I went to the anti-Iraq war demo. I remember seeing “1,000,000 people on the streets of London” on the boards at Piccadilly Circus and thinking: “We’ve cracked it! They have to listen to us!” but, as we now know, they didn’t.

I don’t believe protesting can change much in Britain. But the point is that that we still have to protest, we still have to demonstrate our displeasure at things we don’t agree with or they – whoever they are – will continue unchecked.