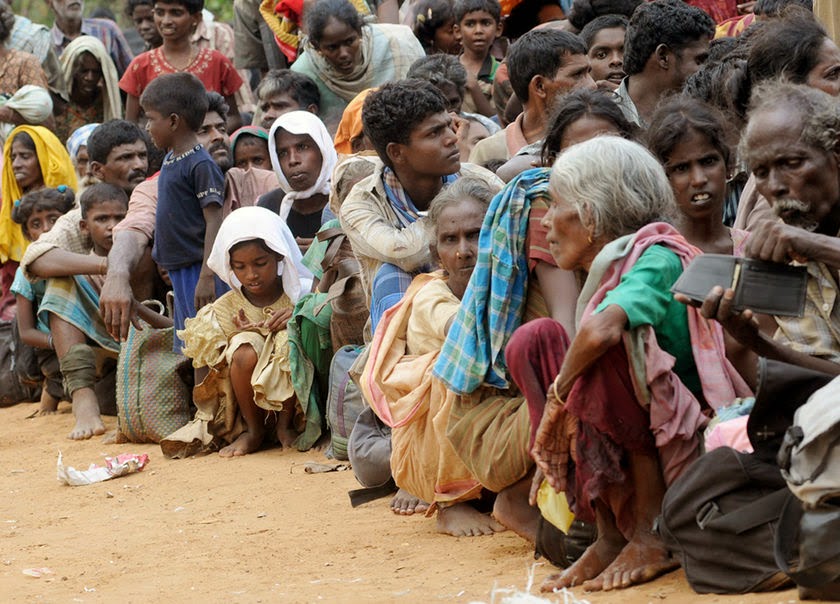 Days after the announcement of Gotabaya Rajapaksa’s presidential candidacy, a quick voice-of-the-people survey conducted on the streets of Colombo by the Sunday Observer exposed how much minority voters fear a return of a Rajapaksa ruler. They echoed concerns of ‘violence against Tamils’, the white van culture, and a military rule.

Many Tamil people living in the capital expressed frustration about the current Government’s failure to deliver on promises of justice and economic prosperity. But the declaration of the former defence secretary as a serious contender for the highest political office of the land brings an entirely different set of fears.

Ranjan, a trishaw driver, said the country under Rajapaksa’s rule will be one filled with disparities. “Be it Rama or Ravana, or irrespective to who it is, all we need is to lead a peaceful life,” he said.

His views were echoed by a person who wished to remain anonymous. She said, if Rajapaksa is elected life would be a struggle to the Tamil community. She also said, in such an environment, the fate and future of Tamils will be unimaginable and indescribable. “He will destroy all and sundry,” she said.

Meanwhile, a Panadura-based resident said, he had no faith in the present government or the previous administration, because none of them have delivered justice to the minorities.

“There have been lapses in the 10-year Rajapaksa regime, as well as in the present administration,” he said. “Both the ruling parties have failed to address our needs. Be it the land held captive issue in Jaffna, or our (Muslim) issues. Our minority will have to tap the best candidate and cast a vote for them.”

Jewellery store owner Gnanakumar said that it is well-known that the Rajapaksa family has committed numerous violence against Tamils. He explained, the key contributor in those heinous crimes has been the SLPP Presidential Candidate, particularly with the white van culture.

“But, at the same time, the former defence secretary is a talented and delivery-oriented person. He is the individual, who gave a facelift and beautified Colombo. Even if he would be problem-free for some, for the Tamils, he certainly will be a pain in the neck, because the reason for the downfall of his brother and ex-President Mahinda Rajapaksa were the minority communities in the country who helped to vote them out,” he explained.

“Sometimes, for minority communities, the return of the Rajapaksa Government could mean there might be a tendency to exact revenge,” Gnanakumar concluded.

Tamil leaders and representatives of the community also remain seriously concerned about the prospect of a Gotabaya Rajapaksa presidency.

Leader of the Eelam People’s Revolutionary Liberation Front (EPRLF) Suresh Premachandran said Rajapaksa will bring forth a military-like administration, and will not abide by the civil administration.

He said, in that situation, the Tamils do not think that he is capable or can be the next President.

“It’s due to his behaviour, attitude and administrative style that all lead to a military rule. For that matter, I don’t think a Sinhalese, Tamil or Muslim can accept that type of a personality. We don’t have any faith in any political party including Mahinda Rajapaksa, President Maithripala Sirisena nor Prime Minister Ranil Wickremesinghe. When this list of people in power had failed, how will a military man make a difference?” Premachandran added.

Reflecting on the issue, former Northern Provincial Councillor S. Thavarasa said the SLPP candidate had made promising remarks during the convention last Sunday (11). During his speech Rajapaksa promised to resolve issues faced by Tamils in the North and East.

Thavarasa said, all the promises of the past, particularly the present government, gave a lot of hope to the people, but ultimately failed to deliver. “If Gotabaya says something, he has the capacity and ability to fulfil those pledges. He has started well. The problem is that our people’s memories are short. There have been so many massacres, burning of the Jaffna library once-upon-a-time, most of them, during the UNP era. Nobody is perfect in this game,” the pragmatic former EPDP member claimed.

The sentiments and fears expressed by members of the Tamil community and their political leadership indicate that the SLPP candidate will face an uphill task as he tries to mobilise support even among sections of the Tamil and Muslim communities whose votes in a presidential election could be a make or break factor.

Speaking to the Sunday Observer, spokesman for Gotabaya Rajapaksa, Milinda Rajapaksha, (no relation), said the former Defence Secretary already has the backing of the minority communities. “Our campaign does not have any special plans to attract minority votes,” he explained.

“Whatever the plan we are putting forward for this country, minorities are part and parcel of it. Of course, we are working with the Muslim, Tamil and Christian communities, as a political party. We have representatives from Muslim, Tamil and Christian com munities, elected members and organisers in the party. All are working with their respective communities,” he said.

According to the SLPP candidate’s Spokesman, in the 2019 presidential election, people will vote on national security and economic issues. “I don’t think those issues apply differently to different communities. Everyone is looking forward to a safe and secure country and they will vote on that line,” the CMC Member said.

However, Jaffna-based political economist and Senior Lecturer at the University of Jaffna, Dr Ahilan Kadirgamar explained that minority votes have often been the deciding factor in presidential elections in Sri Lanka. “Rajapaksa will struggle to attract minority votes because his brother’s regime seemed very ‘anti-minoritarian’,” Dr Kadirgamar told Sunday Observer in an interview.

“Gotabaya Rajapaksa in particular, has been alleged of committing human rights abuses against the minority during the war. Then, to have instigated anti-Muslim forces after the end of the war,” Kadirgamar added.For Tamils and Muslims, there is a great deal of fear about the way Gotabaya Rajapaksa may rule the country, the Jaffna University academic explained.

“He may get a small fraction of votes, but for the most part, the minority will vote against him.”