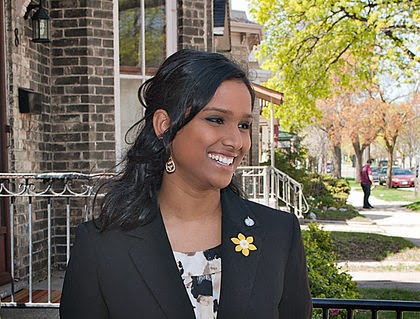 David Akin
OTTAWA — Military officers in Sri Lanka apparently placed an NDP MP visiting the Indian Ocean island under house arrest Tuesday, confining Rathika Sitsabaiesan to her hotel, according to disputed news reports.
The reports said Sitsabaiesan was met at her hotel in Jaffna, the capital of Sri Lanka’s Northern Province, by a military official from the Sri Lankan “Terrorist Investigation Department” (TID) Tuesday evening after she had visited some Tamil-dominated areas in the north part of the country.

But Lynne Yelich, Canada’s minister of state for consular affairs, said on Twitter that Sri Lankan authorities told Canadian diplomats in Sri Lanka that no arrest warrant existed for Sitsabaiesan. Yelich said the Canadian government will “continue to follow closely until she is home.”

Canadian officials have been advised it “it is not a threatening situation,” a government source said.

Moreover, Sri Lankan authorities have told Canadian officials that the news reports – from publications hostile to the Sri Lankan government – are false.

Sitsabaiesan, the first Tamil to be elected to Canada’s House of Commons, was born in Jaffna but she and her family, like thousands of Tamils fled Sri Lanka in fear of their lives during the nasty civil war that ended there just over three years ago.

Sitsabaiesan, who just celebrated her 32nd birthday on Dec. 23, has been a fierce critic of the Sri Lankan government, which stands accused of what the United Nations calls “credible allegations” of war crimes against Tamils during that civil war.

The Canadian government has long been calling for an independent investigation into those allegations but the Sri Lankan government has been pushing back and rejecting any inquiries into the activities of its officials.

Canadian Senator Hugh Segal testified before a House of Commons committee in December that a few days after he visited a Tamil newspaper, the offices were vandalized and its staff were beaten.

Segal testified that when he visited Sri Lanka last spring, he found “a soft ethnic cleansing and de-Tamilfication process that is clearly under way with government support and encouragement.”

Sitsabaiesan, who represents the Toronto area riding of Scarborough-Rouge River – a riding with a large Tamil population – had spoken out against the Sri Lankan government at a Parliament Hill rally this fall.

Prime Minister Stephen Harper, Indian Prime Minister Manmohan Singh and other world leaders refused to attend a fall summit of Commonwealth leaders held in Sri Lanka because the host government refused to acknowledge or investigate allegations of crime against humanity.

Two online sources – TamilNet and the Colombo (Sri Lanka) Gazette – reported Tuesday that Sitsabaiesan had been confined to her hotel.

Tamilnet reported that Sitsabaiesan “has come under the harassment of the occupying Sri Lankan military and police establishment in Jaffna on Tuesday evening.”

According to TamilNet, Sitsabaiesan was met by the officials after visiting “the uprooted people of Valikaamam North and Vadamaraadchi…”

TamilNet reports that eight to 10 officers are stationed at the hotel and no one is allowed to met with Sitsabaiesan, who arrived in Jaffna on Monday.

Earlier Tuesday, police went to the office of Tamil National Alliance parliamentarian Thirunavukkarasu Sridharan in Killinochchi and was questioned about Sitsabaiesan’s visit, the Lankasri News reported.

Sridharan reportedly told police he was unaware of the purpose of her visit.

The TID officials left his office and headed to Jaffna, where Sitsabaiesan is staying.

Meanwhile in Ottawa, NDP Leader Thomas Mulcair spoke directly to Sri Lanka’s High Commissioner to Canada Chitranganee Wagiswara on Tuesday afternoon though his aides would not describe the length or content of the conversation.

One senior source in Mulcair’s office though said the NDP could not confirm any of the details contained in reports of some online news services that first described Sitsabaiesan’s detention.

Another source close to the situation said it is clear, though, that the government of Sri Lanka wants Sitsabaisan to leave the country.