Can We Repay Our Large Foreign Debt? – Nimal Sanderathna 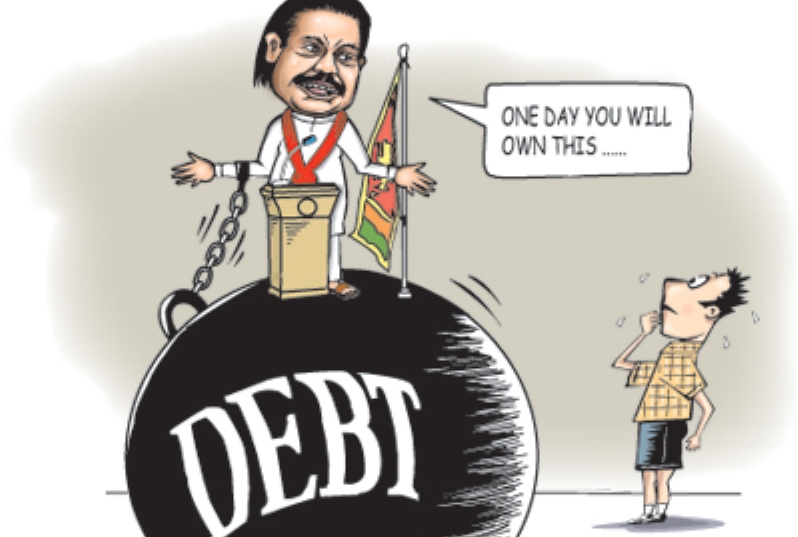 I have been asked the intriguing question as to how we could ever repay our foreign debt that is a high proportion of our GDP. The simple answer is that it is not necessary to rid the country of its entire foreign debt. What is needed is to bring down the foreign debt to a manageable amount when its debt servicing costs are not a severe burden on the external finances of the country. Careful debt management, inflows of non-debt capital, increased earnings from tourism and other services, import constraints and export growth are needed to achieve this.

Current debt
The foreign debt of US$ 44.8 billion at the end of 2015 was 54.4 percent of GDP and more than four times the export earnings of US$ 10.5 billion in 2015. At the end of March this year, the foreign debt increased to US$ 55.19 billion.
The debt servicing costs (repayments of capital and interest) of the foreign debt absorbed 27 percent of the year’s earnings from exports of goods and services. Capital repayments were US$ 3.46 billion and interest payments were US$ 1.22 billion in 2015. The total debt servicing costs of US$ 4.68 billion was 45 per cent of the country’s merchandise export earnings in 2015.

Further borrowing
According to the Finance Ministry, the government will borrow up to US$ 3.5 billion from foreign sources in the next few months. The increasing trend in capital and interest payments that is expected in the coming years is a serious problem. The government would have to continue to borrow to meet its debt servicing obligations.

Increasing costs
The Central Bank has warned of the increasing debt servicing costs owing to the expected gradual increase in global interest rates and financing requirements. The debt service ratio is expected to increase further unless inflows of FDI and earnings from services increase to contain borrowing.

Resolving the problem
Caught as we are in this debt trap, how can we resolve the problem? What are the ways and means by which we could reduce the foreign debt to manageable proportions?

First of all there must be prudence in further borrowing. High interest rate commercial borrowing should be restrained as much as possible. The IMF facility of US$ 1.5 billion would assist us somewhat, but the full loan will be released in six tranches. Currency swaps and foreign bond issues from friendly governments would also help. Nevertheless it is important to ensure that further borrowing is at least cost.

Debt management
There must be a conscious debt management policy. The maturity structure of the debt, as well as the total amount of commercial debt, must be brought down to manageable amounts by limiting short-term debt. The obtaining of non debt creating financial flows in the form of foreign direct investment (FDI) should be actively pursued. As much as possible, there should be prepayment and refinancing of more expensive foreign debt.

New initiatives
The government has recognized the seriousness of the problem and the need to improve its debt management. A new unified debt management unit is being set up at the ministry with the support of the World Bank to streamline and strengthen debt management in an efficient and transparent manner and to facilitate the implementation of the government’s policy reforms. The reforms could have beneficial balance of payments implications.

Furthermore, the Monetary Board has been directed to submit detailed quarterly reports on the issue of domestic and foreign bonds to Parliament. A Committee on Economic Activities is also being set up to submit a quarterly report on the economy including the foreign reserve position to Parliament. The efficacy of these could be judged only in due course.

BOP surplus
Ultimately the foreign debt can be brought down by generating a balance of payments surplus. Bringing down the trade deficit to below US$ 7 billion is needed to generate such a surplus. Increasing export earnings from its low level would enable an improvement in the trade balance. Curtailing imports is also important to narrow the trade deficit. Monetary and fiscal policies should be mindful of their balance of payments implications.

FDI
Foreign direct investment (FDI) has been sluggish and inadequate. FDI was only US$ 0.7 billion last year. Increased FDI, especially in export industries, is important to strengthen the balance of payments and expand exports. A political and business environment that is conducive to FDI would be most helpful in improving the balance of payments and increasing exports.

The foreign debt should be brought down to a manageable level when its debt servicing costs are not a strain on the balance of payments and the external reserves.

While the foreign debt will increase this year with further borrowing to repay maturing debt, the likely balance of payments surplus this year could help reduce the debt. Increasing exports, reducing imports, increasing tourist earnings and other service receipts and higher worker’s remittances could enable a lowering of the debt in the fullness of time.

With the IMF loan facility of US$ 1.5 billion, other expected foreign funds and better prospects for exports this year with the lifting of the EU ban on fish exports and restoration of the GSP Plus concession and increased tourism, it should be possible to achieve a balance of payments surplus of over US$ 2 billion that could be used to reduce the foreign debt burden.