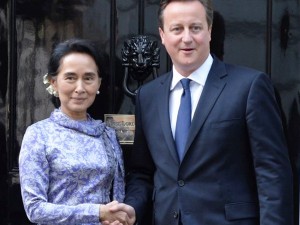 British Prime Minister David Cameron and Burmese opposition leader and Nobel peace laureate Aung San Suu Kyi have both agreed that engaging Sri Lanka is the right way to go on the human rights issue.
Aung San Suu Kyi, who met Cameron in London on Wednesday, said that if he goes to Sri Lanka he should “engage with all those who are involved, all other stakeholders and not just the government”.
Cameron responded: “Very wise words. I will be going to the north of the country as well and I think what Aung San Suu Kyi has said is absolutely right.”

The Herald Scotland reported that the British Premier defended the decision to attend a high-profile international summit in Sri Lanka despite his concerns over the country’s human rights record.
The Prime Minister rejected a Labour call to boycott the Commonwealth Heads of Government Meeting (CHOGM), insisting it was right for him to attend so he could have “very tough conversations” with the Sri Lankan government.

Cameron said he was “not happy” with Sri Lanka’s human rights record and pledged to visit the north of the country, where Tamil separatists fought a long and bitter civil war.

He said: “My decision is… The right thing for us to do is to go to the Commonwealth conference, as leading members of the Commonwealth, and have some very tough conversations with the Sri Lankan government.
“I’m not happy with their human rights record, I’m not happy with what they have done following the conflict and we will have some very frank conversations to make those points. Where I think Labour have got it wrong is that if you don’t go, you can’t make those points.

“No one is going to be listening to the British Foreign Secretary and the British Prime Minister if we’re not there.”
Suu Kyi said she had often been asked if people should come to Burma during the long years of the military regime.

“I have always said that I believe in engagement, but they should engage with us, the opposition, as well.” (Colombo Gazette)