Calls for demilitarisation, ending of emergency laws in North and East of Sri Lanka – CPI M 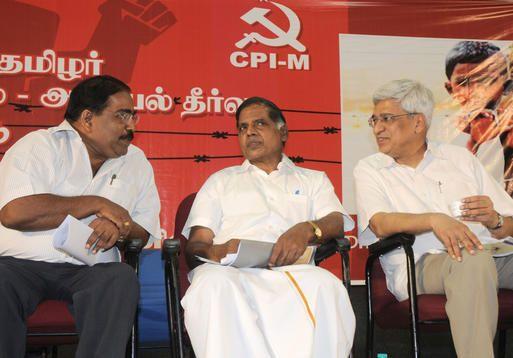 ﻿ CPI(M) general secretary Prakash Karat on Saturday made a strong case for demilitarisation and ending of emergency laws and regime in the North and East of Sri Lanka, saying the failure of Colombo to dismantle the military regime and apparatus was hindrance to a political solution.

“The security architecture remains intact. Emergency laws still continue not only in Jaffna, but in the whole Sri Lanka and this is a precursor for authoritarian rule,” he said.
Accountability
Addressing a conference organised by the State unit of the party here, Mr Karat demanded constitution of a high-level, independent inquiry into human rights violations and serious atrocities during the last phase of the armed conflict so that accountability could be fixed.
“That will be the basis for winning the trust of the Tamil people and pave the way for reconciliation,” he said.
The whole history of Sri Lanka since its independence, he said, had been the history of discrimination against Tamils, denial of their recognition as equal citizens, and denial of laws and socio-economic and cultural rights. Successive ruling classes in the country had failed to evolve a democratic and a federal vision.
“That is the root cause of the long conflict and the armed conflict,” he said and accused President Mahinda Rajapaksa of not fulfilling his commitment even two years after the war.
“After the military victory, the Sri Lankan government had hardened its position and the chauvinistic forces are holding sway. It seems to say that now that we have won the military victory and decimated the LTTE, now is the time to assert the united and integrated state of Sri Lanka. It does not consider any autonomy or devolution of power, or recognise the political question of Tamil minority.”
Political solution
Calling upon Colombo to arrive at a political solution to ensure that Tamils could live in a just and equitable set-up in Sri Lanka, Mr. Karat said the devolution package of Mr. Rajapaksa excluding land and police on the ground that leaving police in the hands of States in India had led to problems such as the Mumbai attacks was misplaced.
“The comparison is misplaced. India is a vast country. If you want to provide meaningful state autonomy, I urge the Sri Lankan government to look at these issues dispassionately,” he said.
He also wanted the Sri Lankan government to take all necessary measures for the return of the displaced Tamils to their homes.
He said New Delhi should use its diplomatic and political instruments to urge Colombo to fulfil its commitment to move forward towards a political settlement.
TNA victory
Tamil National Alliance (TNA) MP Suresh Premachandran said that despite repressive measures and freebies distributed during the elections to the local bodies, Tamil people voted in favour of the TNA so that they could secure their rights.
He said the Sri Lankan government, now increasingly under pressure from the international community for its war crimes, wanted to win the election so that it could tell the world that Tamils were its supporters.
Moves resolution
CPI(M) State secretary G. Ramakrishnan moved a resolution demanding devolution of powers and autonomy to the Tamil areas and equal status for Tamil.
Besides urging Colombo to end the military regime, the resolution demanded release of detained Tamil youth.
The Hindu
Share
Facebook
Twitter
WhatsApp
Pinterest
Email