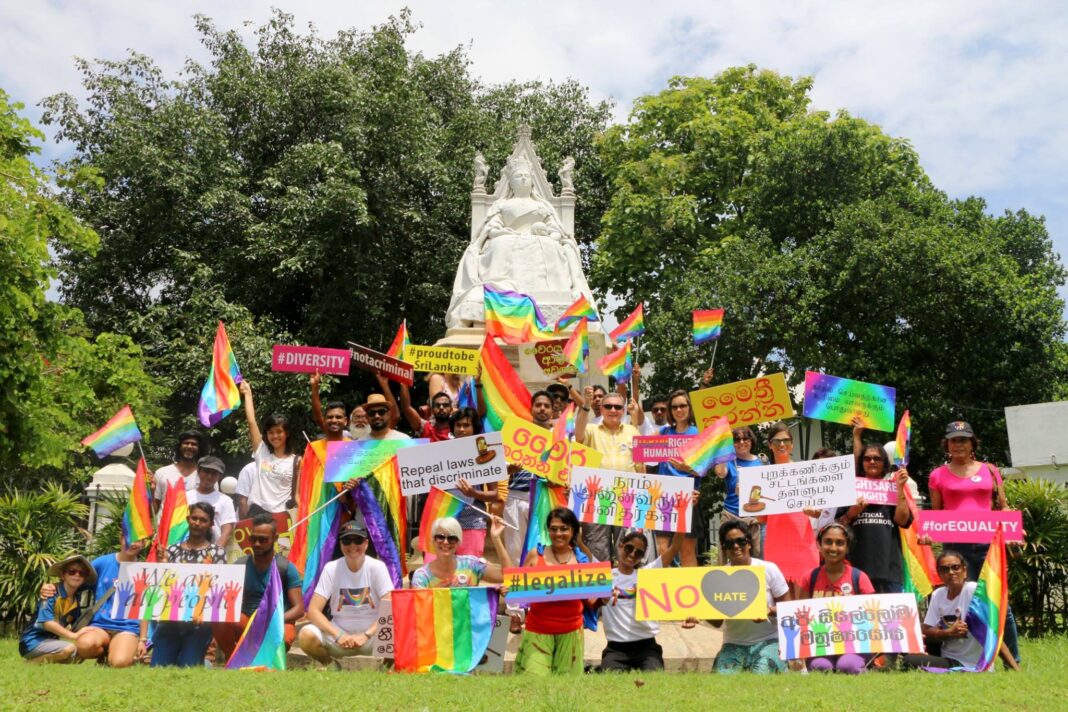 A recent video that has been posted to YouTube on July 27, 2021 by Ama Dissanayake caused quite a stir in Sri Lanka this week. The video–somewhat strangely titled as “listen to how every swear word in the world has come to be” ^f,dafl ;sfhk yeu l=Kqyremhlau yeÈ,d ;sfhk yeá wy.kak& – is an hour-long lecture, delivered by Dissanayake to the Police in Kandy, on reducing on-the-job stress and improving mental health of the police force. In it she introduces herself as an ex-police officer, mental health counsellor and therapist and a trainer in positive thinking and stress management. She then goes on to discuss her views on what makes for a successful marriage/romantic relationship and a family life.

However, it is her malicious comments on the Lesbian, Gay, Bisexual, Transgender, Intersex, and Queer/Questioning (LGBTIQ) community that has caused the uproar and led to a severe backlash from LGBTIQ persons, activists, and allies. In the video clip that has gone viral, Dissanayake claims that “homosexuals” in Sri Lanka are preying on others, especially the youth, trying to make them a part of the LGBTIQ community. She asserts that being LGBTIQ is unnatural and goes against biological and social norms, as such relationships do not lead to reproduction. She then asks the participants to vocalise, loudly, that they are against such relationships.

While her counselling credentials are dubious, Dissanayake’s YouTube channel has over 137,000 subscribers; she has appeared regularly on television and radio channels in Sri Lanka as a counsellor. She has also given lectures to police and the tri forces as well as other professionals on many occasions. Meanwhile, her YouTube video on the dangers of homosexuality has over 59,000 views.

Such homophobic and transphobic views held by mental health practitioners and counsellors can cause irreparable harm to those seeking help, particularly the LGBTIQ community. Unfortunately, Dissanayake is one of the many counsellors in Sri Lanka that seem to be harbouring hatred and disapproval towards the LGBTIQ community. EQUAL GROUND and other organisations advocating for LGBTIQ rights have received complaints on several occasions where mental health practitioners and in some cases medical professionals have asserted that being LGBTIQ is unnatural and deviant and have demanded/advised such patients to “turn straight.” Some medical practitioners have gone as far as to claim that they can cure “homosexuality” and “transsexuality.” In addition, certain hospitals and clinics in Sri Lanka practise conversion therapy – the pseudoscientific practice of trying to change an individual’s sexual orientation.

On a global scale, international psychiatric and medical bodies have largely agreed that diverse Sexual Orientations and Gender Identities/Expressions (SOGIE) are not mental or physical illnesses; LGBTIQ relationships are not considered deviant and unnatural behaviour, as claimed by Dissanayake. The Diagnostic Statistics Manual (DSM) published by the American Psychiatric Association (APA) – the standard classification of mental disorders – removed the diagnosis of “homosexuality” from its second edition (DSM II) in 1973 – nearly half a century ago. Further, the World Medical Association (WMA) has asserted “that homosexuality does not represent a disease, but a normal variation within the realm of human sexuality.” The World Health Organisation’s (WHO), International Classification of Diseases (ICD) removed homosexuality from its list of diseases in 1990 and states that “sexual orientation by itself is not to be considered a disorder” (ICD 10); in 2018, it announced that being trans is no longer considered a mental disorder in its latest ICD, published in 2019 (ICD 11).

It is clear that Dissanayake’s views are outdated and have no scientific or medical backing. Such erroneous views and unethical practices are a grave concern and can lead to tragic consequences such as self-harm, mental breakdowns, problems with self-identity, and even suicide, because it prevents LGBTIQ person from accessing proper mental health and medical care. As such, it is another way that LGBTIQ persons are marginalised and discriminated against in Sri Lanka.

EQUAL GROUND and other organisations advocating for LGBTIQ rights have received complaints on several occasions where mental health practitioners and in some cases medical professionals have asserted that being LGBTIQ is unnatural and deviant and have demanded/advised such patients to “turn straight.”

Homophobia in the Police Force?
In this particular case, the fact that Dissanayake was allowed to share these views at a training for police officers, is even more alarming and highlights the deeply-rooted institutionalised homophobia present in Sri Lanka.

There is documented evidence of Sri Lankan police’s homophobic and transphobic practices. Last year, news emerged that two men had been arrested for having same-sex sexual relations and were produced in court, causing social backlash. However, this was not the first time. A joint press release by EQUAL GROUND (EG) and Human Rights Watch (HRW) revealed that in last few years, Sri Lankan police have arrested individuals perceived as engaging in “acts of gross indecency” in public spaces and raided private spaces to arrest LGBTIQ persons as well as those perceived as members of the community. Meanwhile, According to the performance report (2018) of the Sri Lanka police homosexuality is considered a “vice”, defined as “offences that impact adversely on morality and well-being which is expected from the society.” The report revealed that, under this provision, the Sri Lanka police has prosecuted 33 people for homosexuality in 2016, six in 2017, and nine in 2018. Even more concerningly, in the 2017 – 2020 period, the authorities forced medical tests that include anal/vaginal examinations on at least seven individuals to provide proof of homosexual conduct. Such anal/vaginal examinations are not medically or scientifically valid and are considered a form of sexual violence and torture by international bodies such as the United Nations. Meanwhile, a HRW report in 2016 reported that LGBTIQ individuals have been arrested and detained without cause and have been subject to sexual and/or physical abuse and even raped by police officers.
In this context, trainings and lectures that present such homophobic views only serves to exacerbate the institutionalised homophobia already present in the police force.

Government Response
In response to the controversy, the government has highlighted that LGBTIQ rights are not recognised in Sri Lanka. On Tuesday (03), Cabinet Co-spokesman, Minister Keheliya Rambukwella said, LGBTIQ rights are not constitutionally recognised, while acknowledging that there are ongoing discussions with regard to the issue. The Minister added that he was not aware of the police acting in a homophobic/transphobic manner.

In Sri Lanka, same-sex sexual relations among consenting adults are criminalised by Section 365 and 365A of the Penal Code, which states that “carnal intercourse against the order of nature” and “acts of gross indecency” are criminal offences punishable with a sentence of up to 10 years. Section 365 and 365A do not specify that these offences pertain to same-sex sexual relations, but they are most often used against LGBTIQ individuals, due to the murky and vague nature of the said provisions and their colonial, anti-sodomy legacy.

That said, while same-sex sexual acts are criminalised, diverse Sexual Orientations and/or Gender Identities/Expressions (SOGIE) are not outlawed. Fundamental rights recognised by the Sri Lankan constitution includes non-discrimination under article 12(2) which states that “no citizen shall be discriminated against on the grounds of race, religion, language, caste, sex, political opinion, and place of birth or any one of such grounds”. On several occasions, the Sri Lankan government has committed before the United Nations that LGBTIQ persons are constitutionally protected, and non-discrimination on Sexual Orientation and/or Gender Identity/Expression is implicitly included under this constitutional provision. The Attorney General has held that discrimination against LGBTIQ persons is unconstitutional and violates Article 12 of the Constitution. In fact, both President Gotabaya Rajapaksa and Justice Minister Ali Sabry have committed to non-discrimination due to SOGIE. In this light, Minister Rambukwella’s comments seem directly contradictory to the non-discriminatory policy of the government.

EQUAL GROUND renews its calls to the Government of Sri Lanka, Sri Lanka Police and Sri Lanka’s medical and mental health governing bodies to take action to curb homophobic and transphobic practices and take strict actions against those who perpetrate such actions.