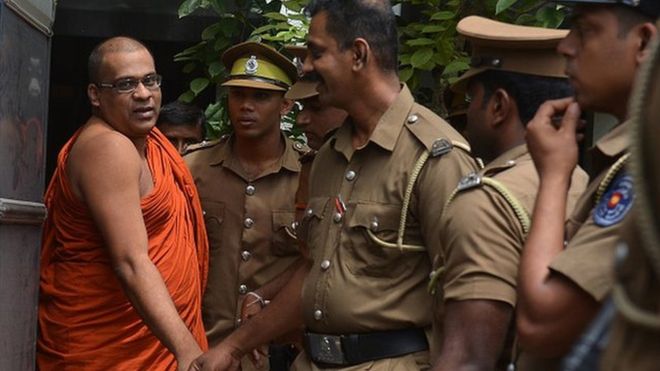 A group of concerned  citizens have drafted a petition addressed to President Sirisena requesting  to (a) Guarantee that Gnanasara will not be released on 4th of February 2019, and any plans to do so are immediately terminated and (b) Direct all agencies involved to expedite investigations into the crimes committed by Gnanasara including in Aluthgama 2014 and prosecute him before ordinary courts with all guarantees of fair trial and without recourse to the death penalty.

The full text of the appeal follows:

We, the undersigned civil society organisations and individuals are increasingly concerned by reports that Galabodatte Gnanasara (hereinafter Gnanasara) may be granted a presidential pardon in view of Independence Day celebrations on 4th of February 2019 on the request of a few powerful politicians and religious leaders. Presidential pardons must be granted on objective criteria, including the remorse shown by the convict, the time already served, the circumstance of the case and the crime that has been committed. Without objective criteria, the use of the Presidential pardon to release convicts could seriously undermine the independence of the judiciary and rule of law in the country.

Gnanasara is presently incarcerated after being convicted by two different courts for separate offences of contempt of court and criminally intimidating Sandya Ekneligoda, a woman human rights defender and wife of a disappeared journalist and cartoonist Prageeth Ekneligoda. His absolute lack of respect for the judiciary is evident from his conduct. In this, his vitriolic display of hate towards Sandya Eknaligoda, in the vicinity of the Magistrate’s Court when she was attending hearings into the disappearance Prageeth Eknaligoda. His lack of remorse has also been specifically commented on by the President of the Court of Appeal in his 56-page judgment.

Background of the Perpetrator

He was involved in inciting hate in Aluthgama in 2014, resulting in attacks against Muslims by Sinhala Buddhists in the area and the killing of four persons. To-date, the involvement of Gnanasara in the incitement to hate in Aluthgama has not been investigated, or prosecuted.

There are also reports of his direct involvement in other incidents of violence against Muslims and Christians. It is also pertinent to note that he is presently incarcerated not for his involvement in hate-speech and inciting violence against religious minorities. A pardon now may also make investigations, prosecution and conviction of him more difficult for some of the violence he is alleged to have been involved in and incited.

Serious blow to the Rule of Law
If a Presidential Pardon is given to Gnanasara when he is convicted of contempt of court, it would seriously undermine the rule of law, independence of the judiciary and administration of justice. It will also make victims and witnesses further vulnerable to similar intimidation in the future. It would illustrate the lack of commitment and political will to guarantee equality and inter-religious harmony in Sri Lanka.
In light of the above we are concerned that any move to provide a Presidential Pardon to Gnanasara would result in immunity to similar hardline individuals and groups, to act above the law and to blatantly intimate and threaten victims and witnesses in cases involving human rights abuses and even act in contempt of court. We further condemn the submissions for his pardon made by a few members of parliament, religious leaders and others who had advocated for his release. Their submission is in direct contradiction with the rule of law and independence of the judicary, and may contribute to a threat to freedom of expression and freedom of religion of religious and ethnic minorities. If Gnanasara is released on Independence Day, it would indicate that the Government supports a culture of impunity for those who engage in the type of human rights violations that Gnanasara has been involved in.

In light of this, we the undersigned urge President Maithripala Siresena to;
(a) Guarantee that Gnanasara will not be released on 4th of February 2019, and any plans to do so are immediately terminated;
(b) Direct all agencies involved to expedite investigations into the crimes committed by Gnanasara including in Aluthgama 2014 and prosecute him before ordinary courts with all guarantees of fair trial and without recourse to the death penalty.

Please send in your names and/or organisations as you would like it to appear in the statement, by 31st (thurs) by 12 noon to [email protected] .