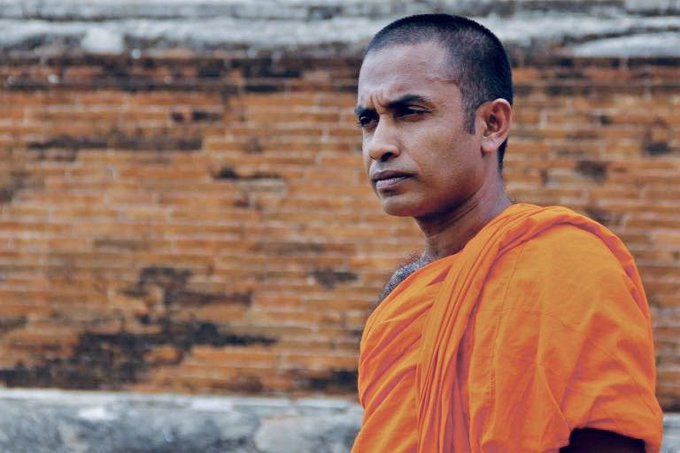 Sri Lankan human rights community, especially those who are associated with youth led peaceful campaign for Freedom, Democracy and Justice under the slogan of  #GoHomeGota urges interventions from concerned sections and person against the arbitrary arrest and detention of Wekandawala Rahula Thero. He is among the hundreds of  protestors arrested and detained in Sri Lanka.

Ven. Wekandawala Rahula Thero is the Chief Buddhist Monk at the Bodhirukkārāma temple in Kudabibula, near Weeraketiya in the Hambantota district. This is very close to Medamulana, the stronghold of President Gotabaya Rajapaksa, former President and Prime Minister Mahinda Rajapaksa and the Rajapaksa family.

Ve. Rahula Thero had started activities related the environment around 2005. He was engaged in environmental related activities at the national level after following a course conducted by the Centre for Environment & Nature Studies in 2012 under the guidance of Dr. Ravindra Kariyawasam.  He was an active member of the Centre for Environment and Nature Studies and turned his temple into a place for dialogues of ecological and socio-political significance. The concept of ‘Community School’ became a reality in Sri Lanka with the leadership of Dr. Kariyawasam and Rahula Thero. The ‘Nature School’ was established at his temple and it paved the way for education of many regardless of age and religion. With the participation of people representing various fields, Rahula Thero had organized programs on various topics including environment, law, literature, art, media, politics and human rights.  Discussions on the above topics were held at night and on holidays for adults and separate programs were held for monks. In addition, a computer lab and a library were established at the temple to provide education to children in the area. Academics, artists and various professionals were invited for workshops and special discussions on various topics each month.

Ven. Rahula Thero stood up against the massive environmental destruction taking place in various parts of Sri Lanka.  Amongst the significant campaigns he was involved in was in relation to the construction of a road through the Sinharaja, Rathupaswala water contamination issue, the destruction of Rilagalayaya, the Uma Oya, Galbokkayaya and Gommunnawa environmental concerns. While many environmentalists took a racist approach during the Wilpattu environmental crisis, Ven. Rahula Thero intervened to expose the real environmental issues in Wilpattu. For many years, Ven Rahula Thera fought against the human – elephant conflict and deforestation in Hambantota district.  In 2021, Rahula Thero played a prominent role in the struggle launched by the farmers demanding a forest reserve for elephants to resolve the human – elephant conflict in Hambantota, which the government was compelled to gazette.

The Thero was present from the beginning of the Galle Face Struggle on 9th April 2022 as Gota Go Gama, calling for resignation of President Gotabaya Rajapaksa (Gota Go Home). He was a pioneer to form the ‘Gota Go Gama Environmental Unit’. With his leadership, a series of discussions on the village and education was initiated by taking books from Gota Go Gama library to various other areas. Rahula Thero actively contributed in a range of activities in Gota Go Gama” such as convening various parties involved in environmental struggles to Gota Go Gama, participating in various discussions and protests. When Rahula Thera heard about the attack on Gota Go Gama on the 9th May, he left his temple to come to Colombo, but due to curfew and lack of buses, he was only able to reach Matara town. The Thero went to Gota Go Gama in Matara, delivered a speech and spent the night at a temple in Matara. Later, he joined the Gota Go Gama in Colombo and participated in the struggle.

Thereafter, another Buddhist Monk (Ven. Dewalegama Premaratne Thero) at Rahula Thero’s temple had been summoned to the Weeraketiya police station on the 26th May. Accordingly, Ven. Rahula and another monk has accompanied the monk who was summoned by the Police. The group had been at the police station from morning till evening and were finally informed that the other Monk would be arrested and produced before the court the next day. Rahula Thero and others had then left the police and started to return. As soon as he left, at the gate of the police station, Rahula Thero was asked him to return back to the police station and he had done so. He was then questioned about the destruction of the grave of father and mother of President Gotabaya Rajapaksa (and his brothers) graves, the burning of the house of the Chairman of the Pradeshiya Sabawa (local council) and several other incidents that happened on the evening and night of 9th May. Police had informed that the son of a politician had informed them that Rahula Thero was present at the site of the burning of a house.

Rahula Thero had explained that he was in Matara at that time, and this could be ascertained by the Budhhist Monks at that temple. But without an investigation, Rahula Thero was arrested and detained by the Weeraketiya Police on the night of 26th May. On 27th May police had told he would be produced before a Judicial Medical Officer, but this was not done. But he was produced before the Walasmulla Magistrate’s Court on 27th May. According to a lawyer who appeared on behalf of Rahula Thero, 7 cases have been filed against Ven. Rahula Thero in connection with incidents of assault and arson. Police requested that identification parades be held in relation to 5 of the 7 incidents and based on this, the Magistrate ordered that Ven. Rahula Thero and others be remanded until the 31st of May.

Several lawyers from Colombo and Walasmulla Magistrate Court appeared on behalf of Rahula Thero on 27th May. A protest was held outside the Magistrate court on 27th May when the case was taken up, calling for his release. A complaint was lodged to the Police headquarters by a Buddhist Monk on the 27th. On 28th May, there were calls for his release during the large protest held in Colombo in connection to 50th day of Gota Go Gama. On 29th May, two press conferences were held at Gota Go Gama in Colombo and a Buddhist temple in Matara, explaining circumstances and calling for his release. Social media campaign for his release is also ongoing.

The case will be taken up again on 31st May at the Walasamulla Magistrate Court, along with an identification parade. Several lawyers, journalists and human rights defenders will be present that day inside and outside courts on behalf of Rahula Thero, and a protest is planned outside the courts.