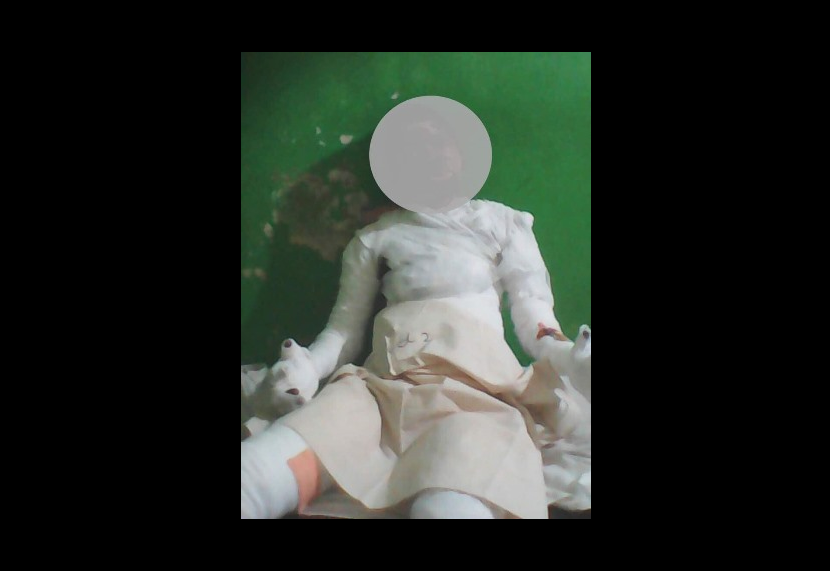 Image: the burned body of the victim.

In one of the worst cases of domestic violence in recent times, F.S a young 18 year old Muslim girl is currently battling life threatening injuries after being tied to a chair, poured oil and set on fire by her abusive husband last Friday. She was four months pregnant and lost her baby. She is also the young mother of a 7-month old baby.

F.S is also a victim of forced child marriage, which is legal for Sri Lankan Muslims. She was 16 years old when was taken to the Nallanthaluwa Kodi Palli Mosque in Munthal, Puttalam and forced to marry Mohamed Imran who was 22 years old. Marrying against her will, F.S did not know that Imran was already married twice before and she was his third wife. She never received a marriage certificate as the nikah was not registered by the men officiating the marriage ceremony.

F.S faced serious physical abuse and psychological trauma after the marriage and had reached out to a colleague a month ago asking for information in obtaining a divorce via the Quazi courts, but never came back again. Later it was learnt that she also went to the police who mediated and reconciled F.S and her husband and sent her back to him, despite grave danger of further abuse.

After the attempted murder of his wife, Mohamed Imran took away their 7 month-old baby threatening her that if she reported the incident as being his fault that he would harm the baby as well. F.S. in her moments of waking consciousness was concerned only about her baby. Fortunately the baby is now safe with other family members but Mohamed Imran is on the run from the police.

It is unbearable to see the young lives of Sri Lankan Muslim women being destroyed because of the lack of legal protection of their rights. F.S was both a victim of her husband but also a victim of the Muslim Marriage and Divorce Act (MMDA) and the Constitution, which does not (yet) protect her rights. What did this child do to deserve this fate? Was it her fault that she was born Muslim in Sri Lanka?

For Muslims, marriage by male guardians without consent of bride, child marriage, forced polygamy, non-registration of marriages is legal and thus both her husband, the legal system and State is responsible for what happened to F.S. Imran Mohamed was like many other husbands – an abusive man who believed he had a privilege and power over his wife. However the gaps in the legal system and the discriminatory loopholes in the MMDA helped him become the perpetrator that he became. Laws are meant to protect rights, not promote abuse.

F.S’s case is also reflective of the deep flaws we have with addressing domestic violence in Sri Lanka. What use are the police if they are sending women back to their abusers and murderers? How many more Sri Lankan women are living with grave dangers within their homes unable to seek support and redress because the system is so hell bent to save marriage instead of save lives? As with MMDA reforms, a review and reform of how the overall justice system is dealing with gender-based violence in Sri Lanka is long overdue.

F.S. is not just another statistic. She is not just another special or ‘rare’ case. She is present day lived reality of women in Sri Lanka. She is a young Muslim woman who was not given a chance by her family, Muslim community and country to thrive and prosper with full protection of her rights, so she could reach her fullest potential. Doctors are unsure of whether or not F.S will recover as her injuries are grave and debilitating. We can only hope for the best for her. Justice however must be served. The IGP must take urgent action to send a special team to get F.S’s affidavit, arrest Mohamed Imran immediately and guarantee the safety of the baby.

Citizens and government of Sri Lanka must do everything in our means to ensure that the future of Sri Lankan Muslim women is not lost as well. The Muslim community has a collective responsibility to stop these discriminations against Muslim women and ensure that FS is the last victim of child and forced marriage in the community.