Buddhist Mahanayakes say ‘out with the 13th A’ 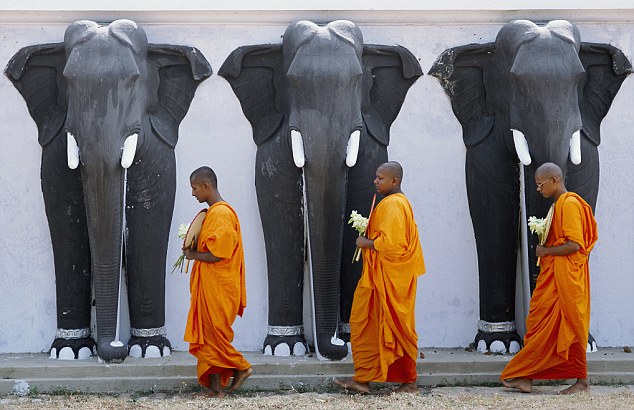 The Mahanayakes of the Asgiriya and Malwatte Chapters have called for the repeal of the 13th Amendment to the Constitution. The Mahanayakes said all should join hands by putting aside all party differences to scrap the Provincial Council system, which is causing divisions and is detrimental to the well being of the country.
Asgiriya Mahanayake Thera Most Ven. Udugama Sri Buddharakkitha and Malwatte Mahanayake Thera Most Ven. Thibbottuwe Sri Siddhartha Sumangala expressed these views when Construction, Engineering Services,Housing and Common Amenities Minister Wimal Weerawansa called on them to seek their blessings for his intended action to campaign to abolish the 13th Amendment to the Constitution .

The Minister called on the Most.Ven. Mahanayakes and submitted a copy of the letter he has drafted inviting the attention of the Prelates in respect of the harm caused to the National well being by the establishment of the Provincial Councils based on the 13th Amendment to the Constitution.

The Mahanayake of the Asgiriya Chapter Most Ven. Udugama Sri Buddharakkitha the Maha Nayake Thera said the Provincial Councils were set up not because they were needed. It was something imposed on us by force. India is a big country and a single state of India was very much bigger than Sri Lanka. A Provincial Council system may suit such a big country. But it is not suitable for a small country like ours. Although there is devolution of power in India it, is not possible for any state to work independently, from the Central Government.

“How much money is being squandered to maintain the Provincial Councils. This is a sort of thing, the government of the day did to keep their power intact. Had a decision been taken after careful thought at that time, we would not have faced the present crisis situation in the country. The wrong decision taken then has provided an opportunity to those waiting to divide this country. What the Constitution has envisaged to give the Provincial Councils would create the opportunity for the North and East to break away from the country ,” the Asgiriya Prelate said.

“If and when the North sets up a Provincial Council, they will do things their own way. If that happens, what would happen to the country that was freed from the clutches of the terrorism with the great sacrifices made by the Armed Forces . The Gam Sabha system would not be bad for a country like ours. No one should be given powers to create their own kingdoms. We need not be ready to act to suit the whims and fancies of foreigners . Ours is an Independent country. We should act in such a way not to create crisis after crisis. All Members of Parliament should decide to act with one voice and march together. Chief Prelate of the Malwatte Chapter Most Ven. Thibbatuwawe Sri Siddhartha Sumangala Thera said they were opposed to the Provincial Council system right from the beginning. We are also totally against the Executive Presidential System of Government and Preferential Vote System. These should be repealed. All should join together to put a stop to all that is detrimental to the country.

National Freedom Front Leader and Minsiter Wimal Weerawansa said the Provincial Council system was something imposed on the country by the enactment of the 13th Amendment to the Constitution. “What they could not achieve through struggle, they are being given through the 13th Amendment. We may be branded as extremists by the international community. But we must defeat those serving the international lobbies.

What we need is a country where the Sinhala, Tamil and Muslim people can live like brothers and sisters. A peaceful country is what we need. We cannot allow the country to be divided according to the whims and fancies of every ethnic group,’’ the Minister added. Meanwhile, the National Freedom Front is to institute legal action before the Supreme Court shortly to repeal the Provincial Council Act.

Construction, Engineering Services, Housing and Common Amenities Minister Wimal Weerawansa told the reporters yesterday that his party was ready with the necessary document to file action before the Supreme Court and they had based themselves on a point of law supportive of their stand and had prepared the necessary legal documents.
Asela KURULUWANSA
CDN